by Mike Rhodes (editor [at] fresnoalliance.com)
The City of Fresno is moving to evict homeless people from all downtown encampments. Is the city offering them a better place to live? Will evicting the homeless, just before the holidays, help them in some way? The answer to these and other exciting questions are answered in the photos and story below. 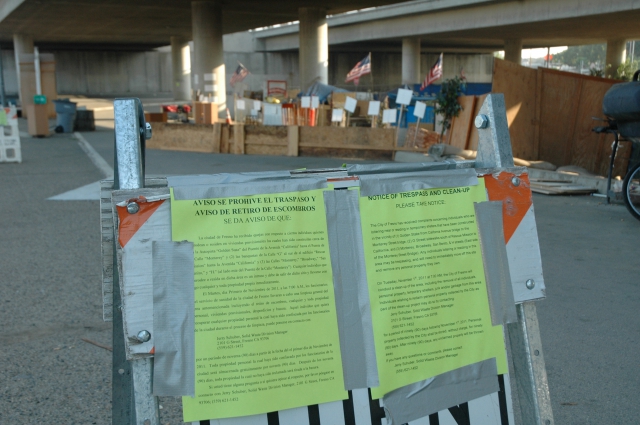 original image (3008x2000)
The City of Fresno has posted notices to evict people in all of the downtown homeless encampments. The first evictions, on Santa Fe south of Ventura, will take place on Thursday October 27. Evictions at all of the other encampments - The Hill, G street, Santa Clara street, F street, and at San Benito/H street will take place on Tuesday, November 1.

The homeless people who I talked to today were concerned that they have no other place to go. Lucifer asked how the city could evict the homeless right before the holidays. “The weather is getting colder and we have nowhere to go.” Lucifer said he was organizing a meeting for later today, to get the homeless to develop a strategy for dealing with these evictions.

On F street Nate said that the city was offering some homeless people housing, but added that “even if the city provides 100 or so apartments, what about the rest of us? There must be 5,000 homeless people in downtown Fresno right now. Apartments for 100 is nothing but a public relations attempt by the city to make it look like they are doing something to help the homeless.”

Butch, who was busy with Saturday morning recycling work on San Benito, wanted to know “where the fuck are we supposed to go?” He said it was cruel for the city to be evicting everyone just as the weather is about to get cold. “How is taking our property and destroying our homes going to help the homeless, that is what I want to know,” Butch said.

Over on Santa Fe (south of Ventura) Rose stood around a morning fire with about 10 other homeless people. They were cooking breakfast when I arrived. Rose had called to let me know about these evictions. She introduced me to Patchrich, who asked what would happen if all of the homeless were to link there arms and refuse to allow the city sanitation workers to do their jobs on Thursday.

Patchrich and Rose also think that they may have squatter rights at the Santa Fe encampment, since they have been living there for over a year. I told them I would seek a legal opinion about that and get back to them.

In the meantime, the first evictions start at 7 a.m. next Thursday at Santa Fe, just south of Ventura. Evictions at the other encampments are scheduled for 7 a.m. on November 1. Will there be homeless advocates there to support potential resistence to the evictions? Will legal observers be on hand to monitor the situation and defend the civil/legal rights of the homeless? Stay tuned. . . 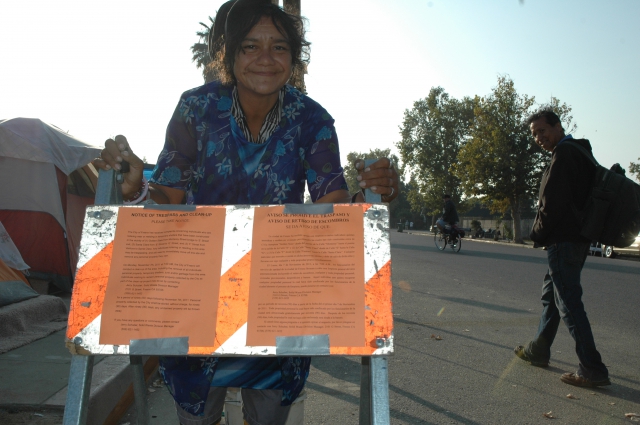 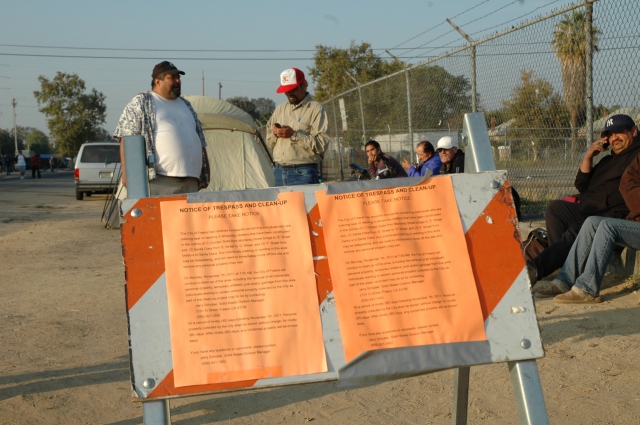 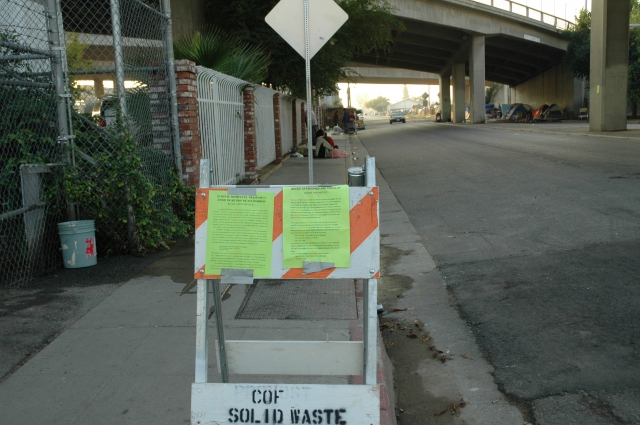 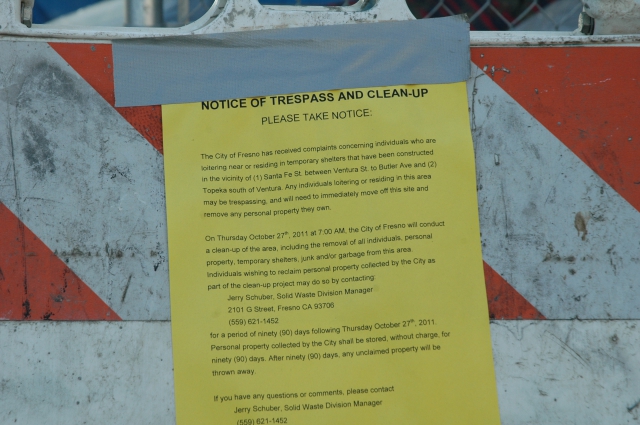 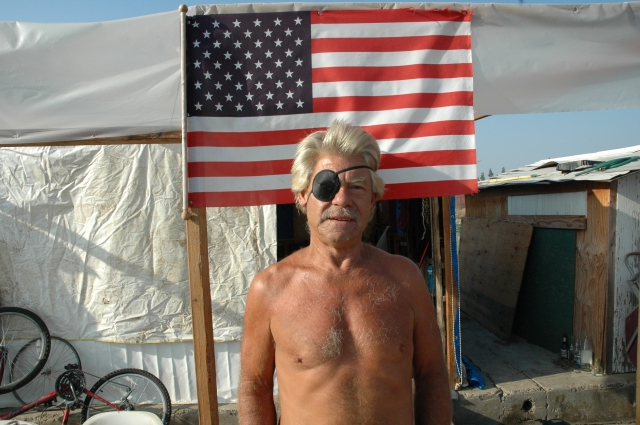 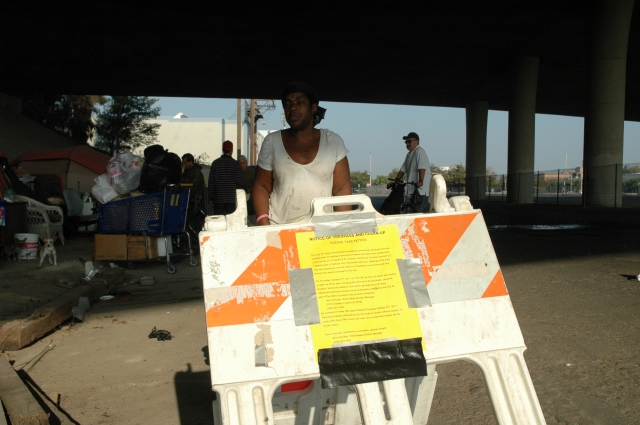 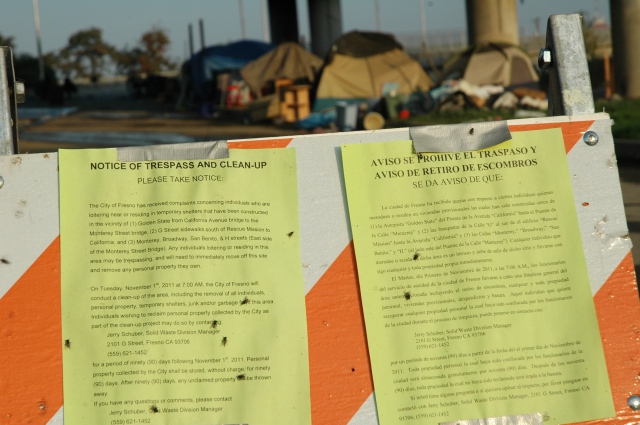 original image (3008x2000)
END_OF_DOCUMENT_TOKEN_TO_BE_REPLACED
§Photos of the eviction
by Mike Rhodes (editor [at] fresnoalliance.com)
For those reading this thread about the eviction of the homeless on Santa Clara, I have posted photos of what happened on Thursday here:

http://www.indybay.org/newsitems/2011/10/27/18695578.php and http://www.indybay.org/newsitems/2011/10/27/18695595.php .
Add Your Comments
Latest Comments
Listed below are the latest comments about this post.
These comments are submitted anonymously by website visitors.
TITLE
AUTHOR
DATE
hey dan
kelly
It sounds like Hate Crimes
Ann
Kelly...
Dan
thanks Dan
kelly
Kelly...
Dan
Statement read at this morning's press conference
Mike Rhodes
god help you both then
kelly
Press Conference
in solidaity with the homeless
Mike...
Dan
Treat the Homeless with Dignity and Respect
Mike Rhodes
Support Independent Media
We are 100% volunteer and depend on your participation to sustain our efforts!