Add an Event
Newswire
Calendar
Features
Home
Donate
From the Open-Publishing Calendar
From the Open-Publishing Newswire
Indybay Feature
Publish to Newswire
Add an Event
Related Categories: Central Valley | Health, Housing & Public Services
War Against the Poor (part 1)
by Mike Rhodes
Thursday Oct 27th, 2011 7:11 PM
The City of Fresno and Caltrans did what they said they were going to do today - they attacked the homeless encampment on Santa Fe street in downtown Fresno. But, they did not destroy the encampment without being confronted with significant resistance by community members who protested the eviction. The first photo (below) shows a line of resistance that formed when the City of Fresno made their first attempt to destroy the homeless encampment. 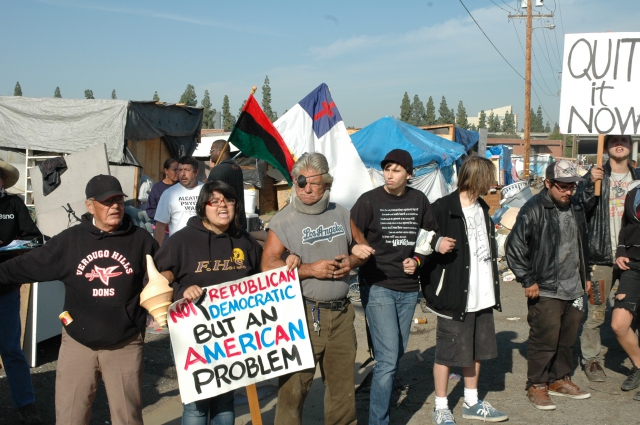 original image (3008x2000)
While there were over 100 community supporters to protest the destruction of the homeless encampment on Santa Fe in downtown Fresno, that was not enough to stop Caltrans and the City of Fresno. The encampment, which is spread across a very long block in the old industrial section of downtown, proved to be strategically impossible to defend, with so few people. If there had been 1,000 advocates, the city and Caltrans would have had an extremely difficult time fulfilling their mission.

The north end of the Santa Fe encampment was on Caltrans land and the south half of the encampment was on City of Fresno property. Caltrans was involved because the north portion of the camp is under the highway 41 overpass. When homeless supporters were defending shelters on the far south end, Caltrans and the CHP would start to work on the north end. Ultimately, it was impossible for the advocates, whose numbers diminished over the course of the day to prevail. On the other hand, this was the strongest show of public support for the Fresno homeless - ever!
http://fresnoalliance.com/wordpress/?p=1313
§Homeless People and Allies Form a Line of Resistance
by Mike Rhodes Thursday Oct 27th, 2011 7:11 PM 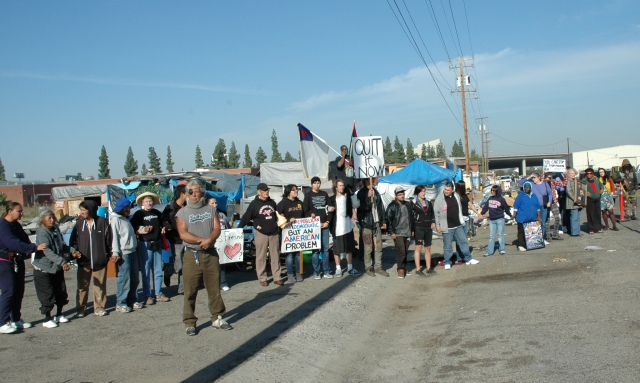 original image (2542x1523)
This line of resistance, set up to protect homeless peoples shelters at the south end of Santa Fe was successful. The City gave up, but regrouped.
http://fresnoalliance.com/wordpress/?p=1313
§More Faces of the Resistance
by Mike Rhodes Thursday Oct 27th, 2011 7:11 PM 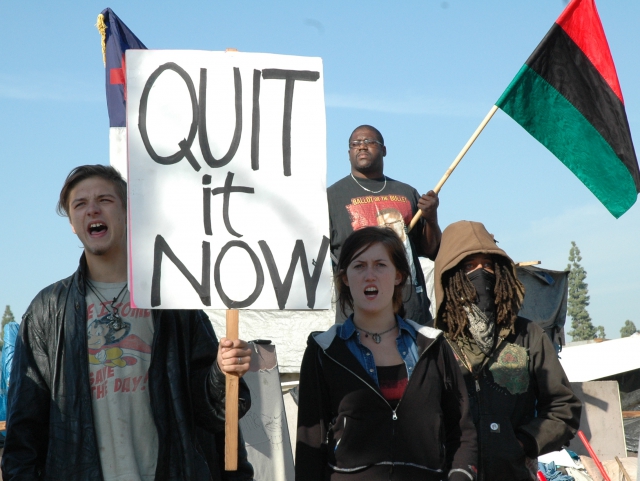 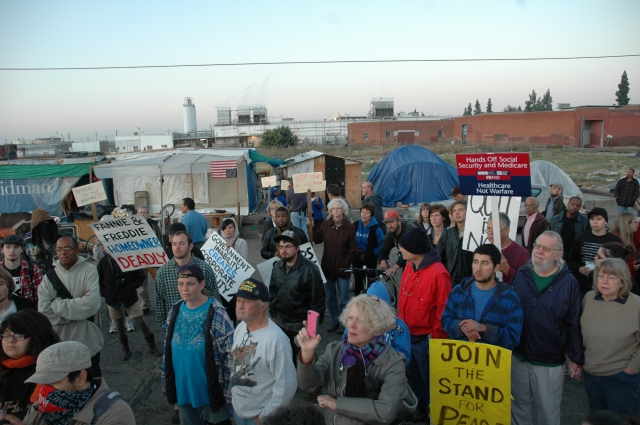 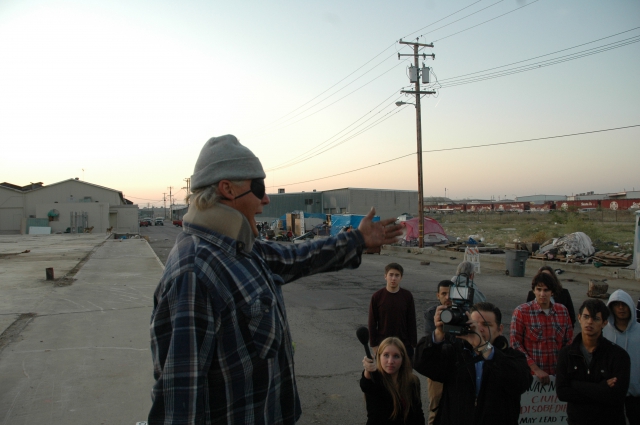 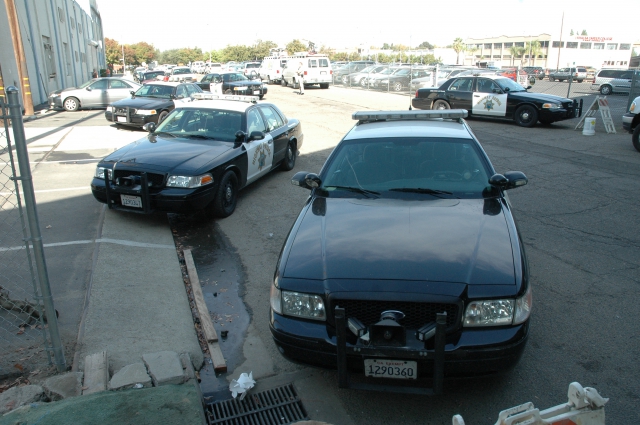 original image (3008x2000)
While the people were stopping the City of Fresno from destroying homeless people’s shelter on the south end of Santa Fe, the Highway Patrol and Caltrans arrived on the north end of the block.
http://fresnoalliance.com/wordpress/?p=1313
§Caltrans Destroys a Tent
by Mike Rhodes Thursday Oct 27th, 2011 7:11 PM 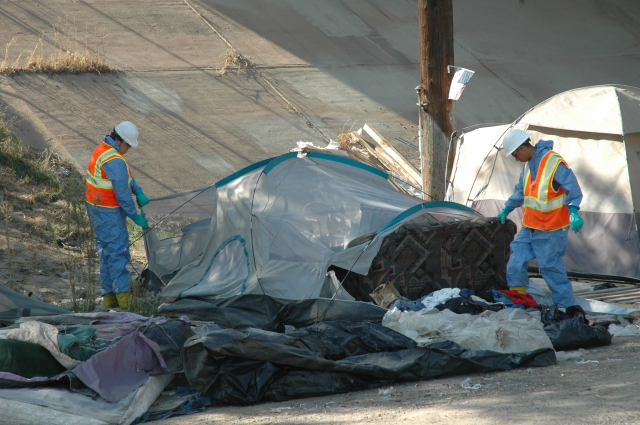 original image (3008x2000)
Backed up by the CHP and with most of the community supporters and homeless people at the other end of the encampment, Caltrans moved in and started destroying tents. 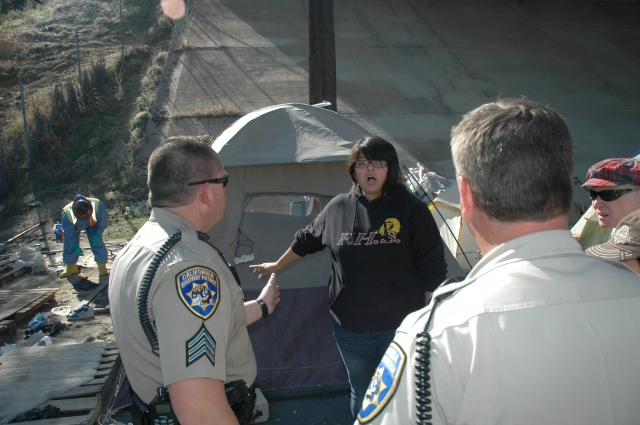 original image (3008x2000)
After two tents were destroyed, homeless advocates positioned themselves in front of other tents to protect them. This held off Caltrans for a while.
http://fresnoalliance.com/wordpress/?p=1313
§This Led to a Confrontation
by Mike Rhodes Thursday Oct 27th, 2011 7:11 PM 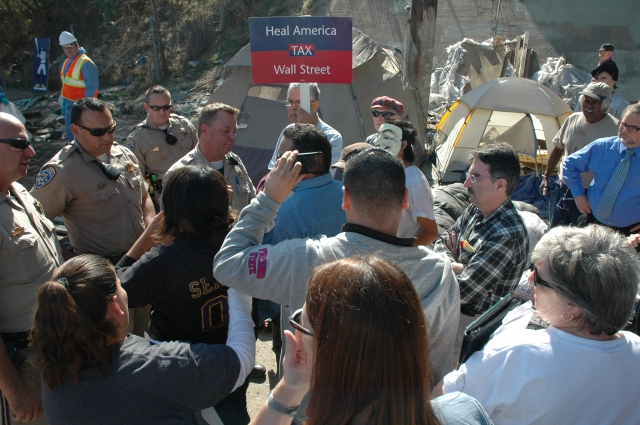 original image (3008x2000)
The CHP tried (unsuccessfully) to remove the protesters.
http://fresnoalliance.com/wordpress/?p=1313
§Meanwhile, Back on the South End of the Encampment
by Mike Rhodes Thursday Oct 27th, 2011 7:11 PM 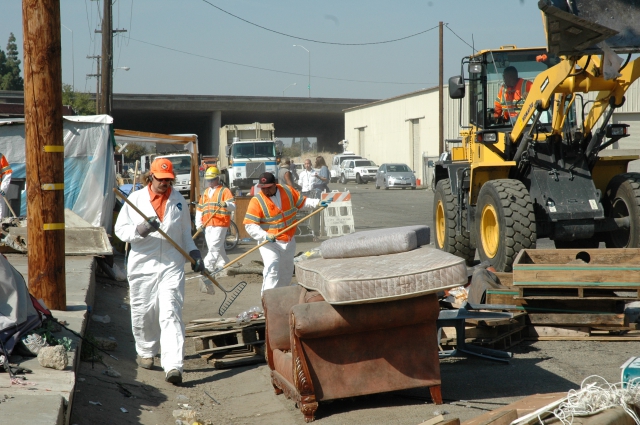 original image (3008x2000)
City of Fresno workers took advantage of the confrontation on the north end of the encampment with the CHP and Caltrans to start the destruction of the south end. They moved homeless property out onto the road, declared that it was garbage and destroyed it.
http://fresnoalliance.com/wordpress/?p=1313
§This Couch was Destroyed
by Mike Rhodes Thursday Oct 27th, 2011 7:11 PM 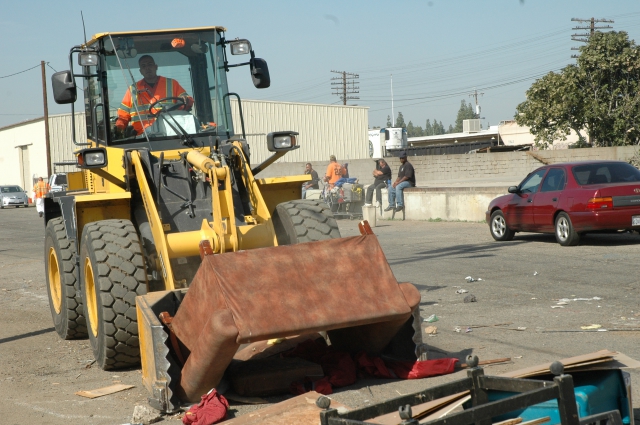 original image (3008x2000)
All photos by Mike Rhodes. Earlier stories, related to this eviction can be seen at:

http://www.indybay.org/newsitems/2011/10/22/18694453.php
http://fresnoalliance.com/wordpress/?p=1313
Add Your Comments
LATEST COMMENTS ABOUT THIS ARTICLE
Listed below are the latest comments about this post.
These comments are submitted anonymously by website visitors.