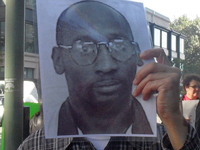 "All Out for Troy Davis" as Execution Set for September 21st
Fate of Troy Davis Decided by Georgia Parole Board Sept. 19th, Executed Sept. 21st

Troy Davis has been on death row in Georgia for twenty years. He is set to executed by the state on Wednesday, September 21st, despite the fact that there was no physical evidence presented against him during his trial and since then seven out of the nine "witnesses" who testified against him have recanted, many claiming that they were pressured by police. One of the two who has not recanted is suspected of being the true killer of the Savannah police officer for whose death Troy was wrongfully convicted. As the courts are no longer an option to establish Troy Davis' innocence, his last hope is the Georgia Board of Pardons and Paroles. One week after his execution date was announced, the NAACP had collected and delivered to the parole board 660,000 signatures calling for clemency for Troy Davis. On September 16th, supporters rallied in cities across the country. A solidarity rally was held in Oakland in front of the Federal Building. A "Save Troy Davis - Stop the Death Penalty" event was held at Laney College on September 20th. On September 21st, as Troy Davis was set to be executed in Jackson, Georgia, a vigil was held in San Francisco.

Marlene Martin writes: After many long years of fighting, we are now down to the last few days to save the life of Georgia death row prisoner Troy Davis, who is scheduled to be executed on Sept. 21. These nail-biting moments are all that is left to try to convince three of the five members of the Georgia Board of Pardons and Paroles to grant clemency for Troy, who has run out of his legal appeals. If the board does grant clemency, Troy will receive either a life sentence or life without the possibility of parole sentence. This “good” outcome has its own cruelties that we will continue to fight against as soon as we win it – but first we have to win it! ... The board will hold a clemency hearing in Troy’s case on Monday, Sept. 19, in Atlanta. This could last for hours – one previous clemency hearing for Troy lasted 10 hours. The board will likely make its decision at the end of that day. Activists will hold a vigil outside the hearing all day long. We don’t know how this struggle will go, but as Darby Tillis, a former death row prisoner from Illinois, told me yesterday, “We must continue to be strong, remain vigilant and fight to the bitter end.”