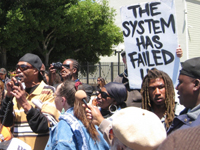 Nineteen year-old Kenneth Harding was approached by San Francisco police officers doing fare inspections on the Muni platform at Third and Palou on Saturday, July 16th, 2011. Within a half block of running from police through a plaza, he was shot down on Oakdale Street and left to bleed to death as police offered no medical assistance and crowd-control police arrived to hold back a growing mass of angry residents well before any emergency paramedics reached the area. Some witnesses at the scene have said Kenneth Harding had his hands above his head as he was running away. Police have said that Kenneth Harding fired shots at them first as he ran and that police shot in self-defense as they chased him. At first, police said they could not find the weapon they claim he used, then they said they found it. Now, SFPD is claiming that their officers shot Kenneth Harding just once in the leg and he somehow killed himself with his own gun as he ran, but they have not recovered the weapon as the gun they said they previously found is not the one Kenneth Harding allegedly fired at the time.

Numerous gatherings, marches, rallies, and vigils have challenged SFPDs evolving version of events and protested police who continue to kill with impunity. Angry Bayview residents began to gather immediately at the scene of the shooting and several videos have surfaced from the time Kenneth Harding lay on the sidewalk in a pool of his own blood. Later that night, a solidarity march was held in the Mission District. The following day, July 17th, Bayview residents again gathered at the scene and police used pepper-spray on at least one person. On July 18th, a press conference and rally were held at 3rd and Oakdale. On July 19th, a march that began at Dolores Park ended with over 20 arrests on Powell Street. On July 20th, a crowded town hall, called at the Bayview Opera House by community representatives and local clergy, drove SFPD chief Greg Suhr away by booing and shouting him down. On July 22nd, a rally and vigil were held in the evening in the Bayview. On July 23rd, an afternoon speak-out was held. Bayview activist Debray Carpenter was arrested by SFPD late last week and he was finally released on July 26th with no charges.

SFPD: Don't Even Try To Front | I Told You We'd Be Back: A Letter to the SFPD and BART Police |