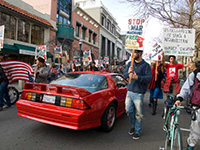 Protests for Bradley Manning and WikiLeaks Around Bay Area
WikiLeaks Solidarity in SF, Berkeley, Santa Cruz: "Exposing the Truth Is Not a Crime"

In San Francisco on Jan. 15th, WikiLeaks supporters held a media intervention at the TransAmerica Pyramid and New York Times office; art supplies were on hand for participants to contribute to the Cablegate Coloring Book.

Also on Jan. 15th in San Francisco, at 11am, a demonstration in solidarity with the Tunisian revolt will be held at the Tunisian consulate. The revolt is said to have been sparked in part by revelations about the Tunisian regime published by WikiLeaks.

On Jan. 12th, a procession and rally was held in Berkeley to close Guantánamo and support WikiLeaks and Bradley Manning.

Dozens of people came together in Santa Cruz on January 8th to rally at the clock tower and march down Pacific Avenue in solidarity with WikiLeaks, Julian Assange, and Bradley Manning. Protesters lined Mission Street with homemade signs in defense of free speech and calling for the prosecution of U.S. government war crimes.

WikiLeaks, founded by Julian Assange, is an international non-profit organization that publishes submissions of private, secret, and classified media from anonymous sources and whistleblowers. WikiLeaks is receiving significant persecution from the US government and transnational corporations for releasing information the government finds embarrassing for the world to know.