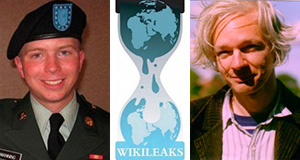 Private First Class Bradley Manning is facing up to 60 years in prison for allegedly leaking information through WikiLeaks that expose U.S. war crimes. Among these is helicopter gunship video that shows U.S. troops nonchalantly mowing down two journalists, first aid respondents, and children with machine gun fire. The perpetrators of these crimes are not being punished, even with video proof of the cold blooded murders. Instead, the military brass are prosecuting Bradley Manning.

The leaked documents come from the Internet investigative site, WikiLeaks. Editor and chief of this site is Julian Assange. WikkiLeaks has released 90,000 documents on the war in Afghanistan and 350,000 on the war in Iraq. These documents detail executions at U.S. checkpoints, the torture of detainees, the sectarian carnage unleashed by the occupation of Iraq, and the U.S."Task Force 373", a team of professional assassins responsible for numerous massacres in Afghanistan. These atrocities started under Bush and have continued, without respite, under Barack Obama, including Obama’s "reduced" occupation force in Iraq.

The newly formed Santa Cruz Coalition to free Julian Assange and Bradley Manning has organized two demonstrations to support Assange and Manning, while calling for an end to the of U.S. occupation of Iraq, Afghanistan, and Pakistan. An informational protest was held on December 18th. (

Photos). On Saturday, January 8th, there will be a rally and march beginning at 1pm at the Clock Tower on Pacific Avenue in Santa Cruz.