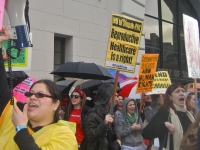 The January 23rd "Walk for Life" was smaller than in past years. By its own estimate, the group against reproductive choice was 20,000 to 30,000. However the San Francisco Chronicle estimated the size at "several thousand", not the "tens of thousands" that the pro-lifers claim.

More than 200 pro-choice activists, while a smaller group, had a significant presence, including music by Brass Liberation Orchestra, the Raging Grannies, a great pro-woman rapper on stage, and loud chants directed at the anti-choice demonstrators.

Their demands included affordable, accessible abortion without apology, and the elimination of insurance companies via a single payer Medicare for All style national health care system, with true universal coverage. In addition to concerns for women's healthcare, the coalition of activists demanded an end to sexual violence and rightwing terrorism. They called for civil rights for queers and immigrants.

Queer and feminist activists managed to block the "Walk for Life" march for a brief period by extending a 25-foot banner across the Embarcadero at the moment the march began. Their banner read "Religious Bigots Unwelcome in San Francisco." After police forced the pro-choice protesters off the road, they held the banner along the side where all the marchers saw it.

There was also a "Walk For Life" in Los Altos on Januray 22nd. Linda Williams, President and CEO of Planned Parenthood Mar Monte, adressed about 100 people, then they walked and marched through downtown Los Altos. They outnumbered their Catholic Church opponents on the opposite side of the street three-fold.