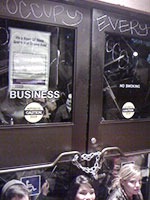 Students occupied the business building at San Francisco State University before dawn Wednesday, December 9th to protest higher tuition, massive layoffs, hundreds of classes cut and millions for administration salary. Hundreds of students linked arms at various points throughout the day in solidarity against the complete dismantling of the education system in California. Students drew connections between layoffs and cuts in other public sectors, billions spent on war and millions of people without health care.

Into the evening and early morning hours, solidarity demonstrators maintained human blockades at the four doors to the building. On the inside of the doors, occupiers had stacked desks and chairs and zip-tied them together. At one door, dozens danced to a sound system. At another, people played guitar and drummed. Around the building, people bundled up against the cold of the night and the light rain that fell. Just after 3am, reports of police movement in the area got everyone to their feet, locking arms at the doors. At 3:45am, police in riot gear rushed the building, breaking a side window to gain entry. As the occupation hit twenty-four hours, at about 4am, police were arresting occupiers who had retreated to a single room on the second floor. Those blockading one of the doors on the outside were forcibly removed so that police could clear the way for arrested occupiers to be removed from the building. Solidarity demonstrations on 19th Street continued for another two hours, as protesters attempted to block police vans from moving with arrestees and later blocked early commuter traffic. Including occupiers and those outside, over 30 people were arrested, cited, and later released.