Add an Event
Newswire
Calendar
Features
Home
Donate
From the Open-Publishing Calendar
From the Open-Publishing Newswire
Indybay Feature
Publish to Newswire
Add an Event
Related Categories: San Francisco | Education & Student Activism | Police State & Prisons
SFSU Occupation Police Raid, 12/10/09: photos and video (2 of 3)
by dave id
Thursday Dec 17th, 2009 11:48 PM
San Francisco State University students occupied the College of Business building and barricaded the doors from the inside at about 4am on December 9th, 2009. On the outside, students and other supporters protected the occupation by blocking the doors with their bodies throughout 24-hour occupation. Shortly before 4am on December 10th, California State University police and San Francisco police initiated a swift raid of the building, gained entry by breaking a side window, and arrested several outside and all of those inside. 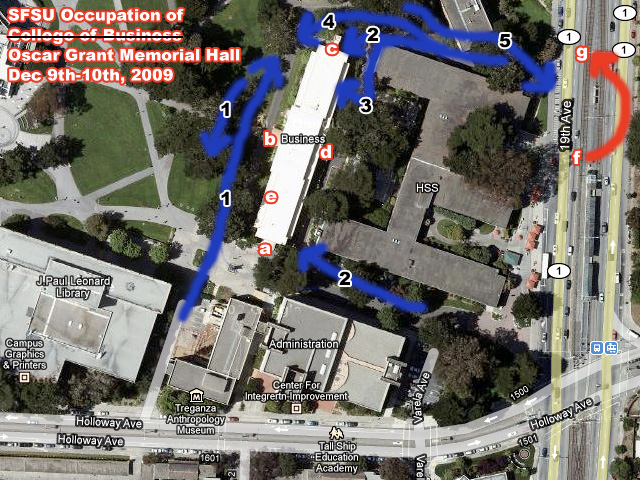 Key to map: Letters are solidarity students on the outside and barricades inside; numbers are cop movements during raid. Both used below along with photos and video.

Students renamed the College of Business building the "Oscar Grant Memorial Hall" during the occupation.

[When I first got to the occupation about 11pm and started taking pictures, students weren't too sure of me, so I started talking with them about indybay and Oscar Grant as I circled the building again and again, handing out what indybay and Oscar Grant stickers I had on me as I went around checking in with folks at each door. After a couple of hours, and countless trips around the building, students began to say that they had decided to rename the building for Oscar Grant. Of course, I was pleased, but I didn't mention it in the first post because I thought maybe it was just wild-eyed occupation talk. But apparently the name has stuck according to their blog and that's just cool. I think it's so important if these student protests are to succeed that dots are connected between fee hikes, budget cuts, and riot police on campus and the prison-industrial-complex in general, all being intertwined in California and the U.S. A new generation of students are becoming active like we haven't seen for years (finally!), and the potential is out there for new bridges to be built across social justice movements.] 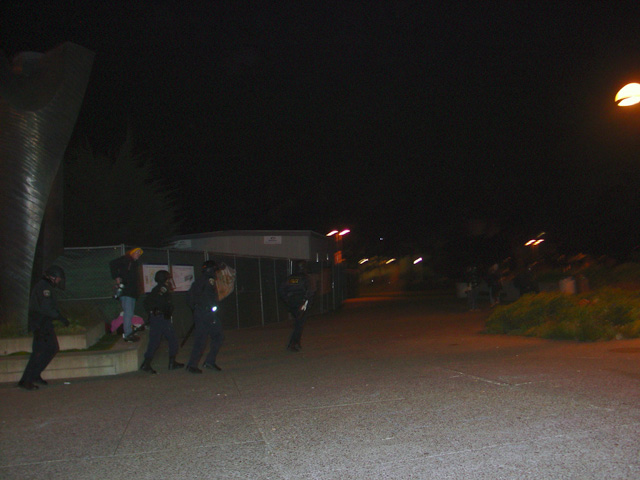 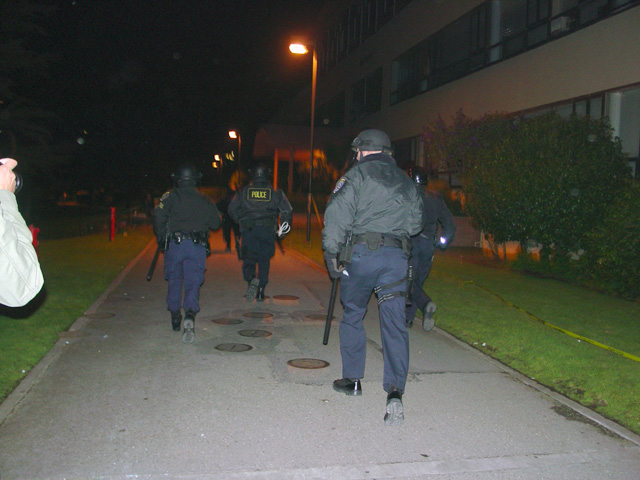 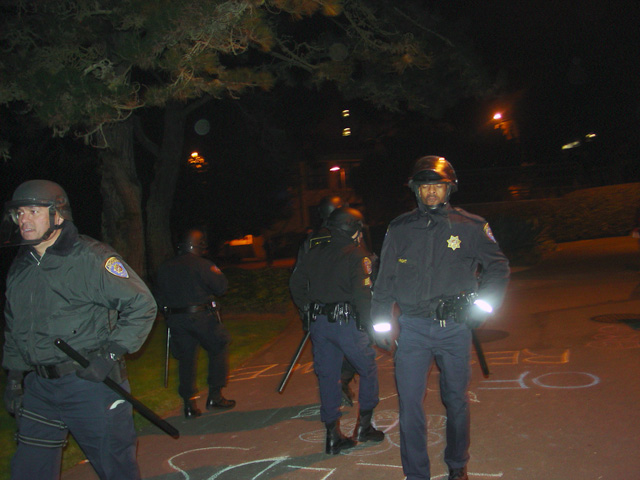 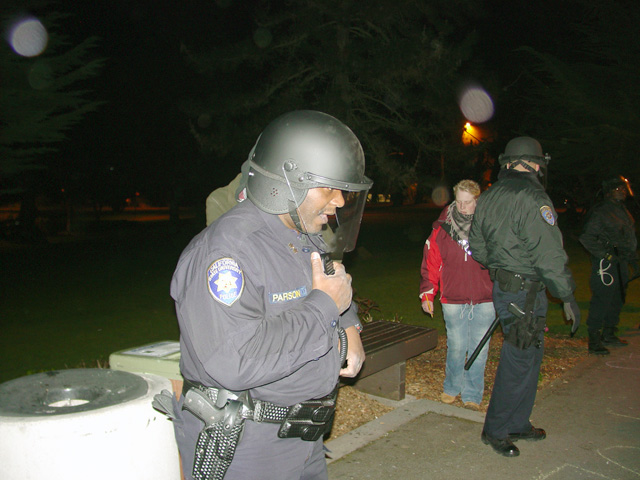 when these cops just stood there after having run in, a realization that this first line of police were a decoy became apparent. likely, this cop was calling to say that they had successfully run their "interference" and others could proceed
http://www.indybay.org/newsitems/2009/12/1...
§b: students anticipating possible police attack at west door
by dave id Thursday Dec 17th, 2009 11:48 PM 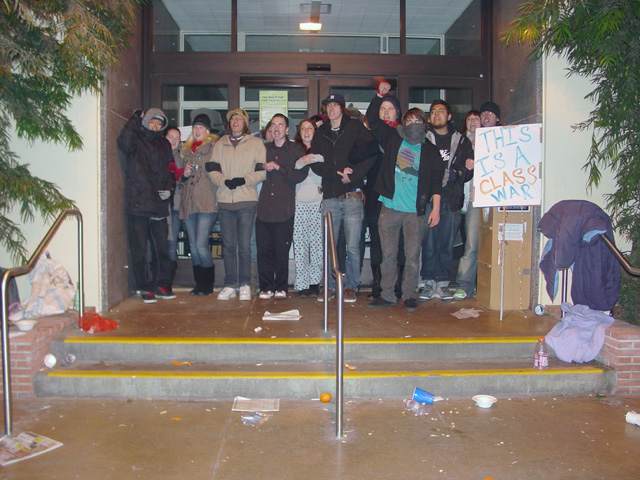 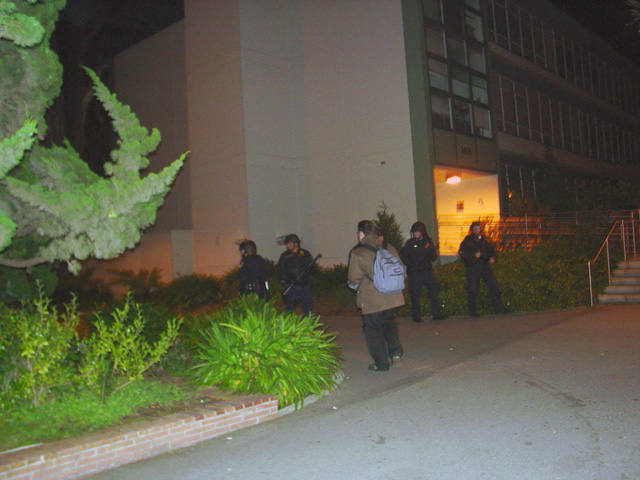 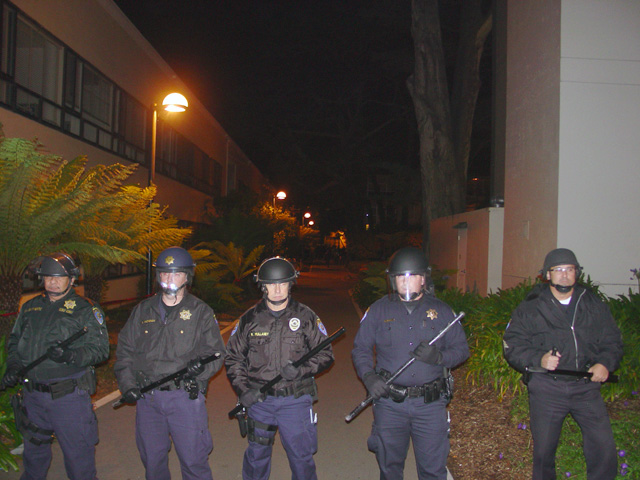 the window was broken for police entry in the distance in this shot from southwest corner
http://www.indybay.org/newsitems/2009/12/1...
§c: police move in to clear north door for removal of those soon to be arrested inside
by dave id Thursday Dec 17th, 2009 11:48 PM 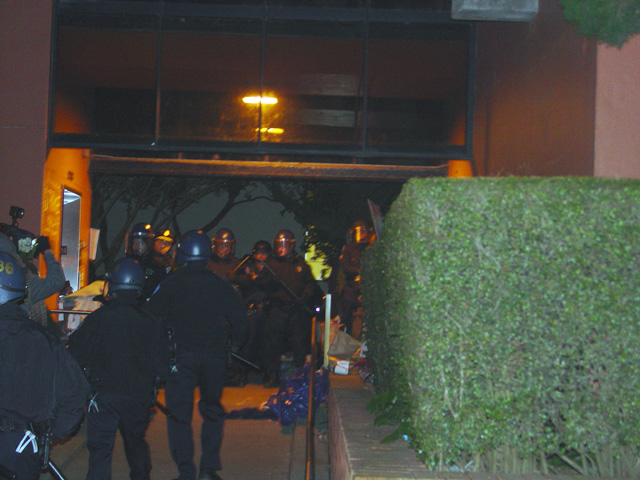 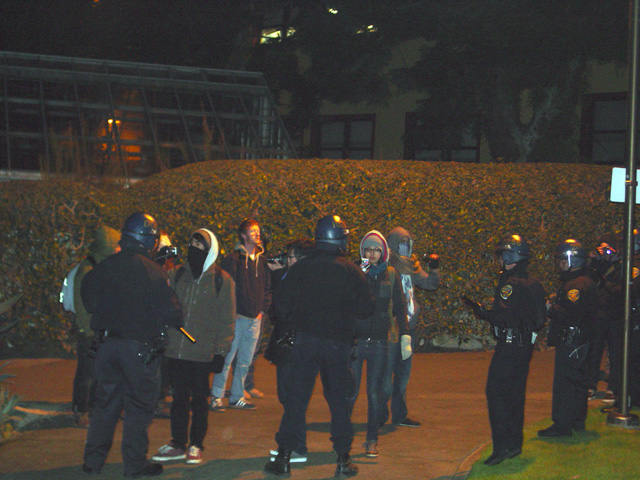 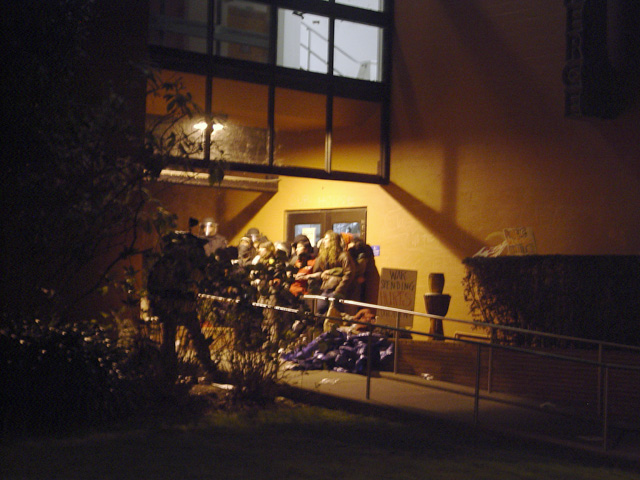 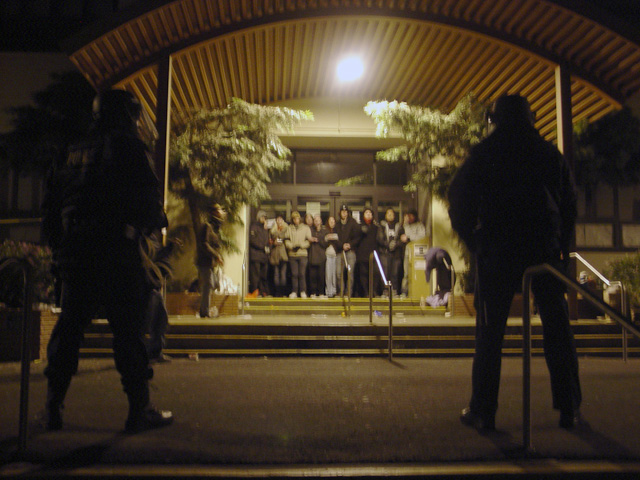 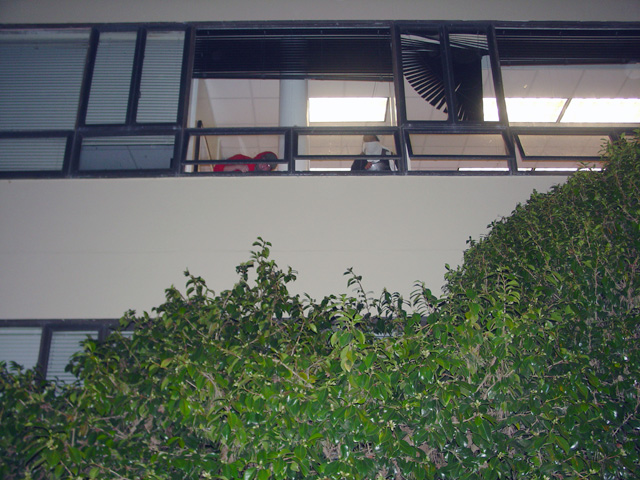 inside occupiers sing "Which side are you on, boys?" as police enter their last refuge on second floor
http://www.indybay.org/newsitems/2009/12/1...
§e: occupiers lined up against windows as riot police enter room
by dave id Thursday Dec 17th, 2009 11:48 PM 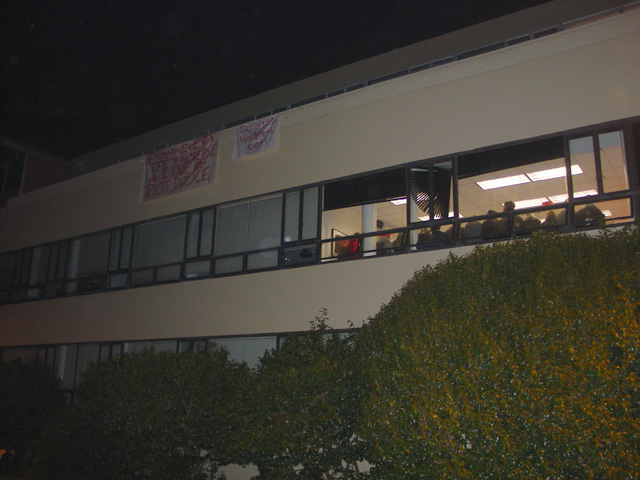 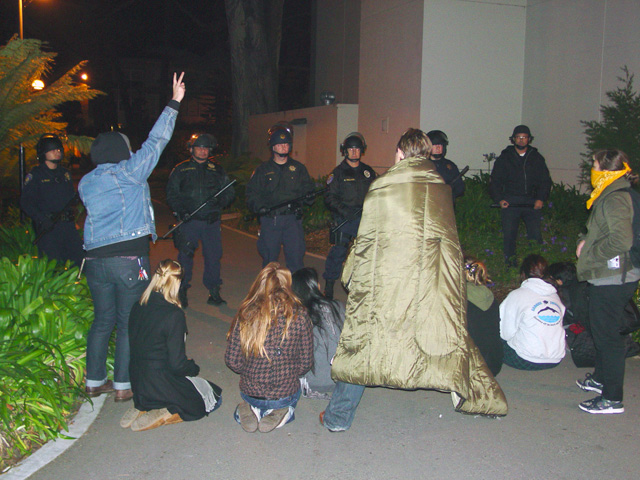 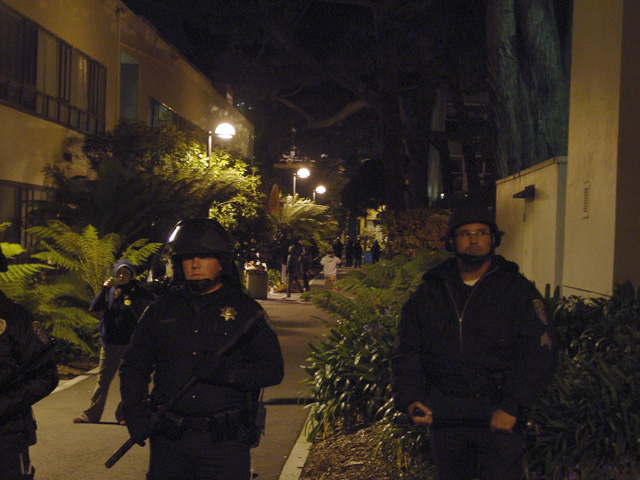 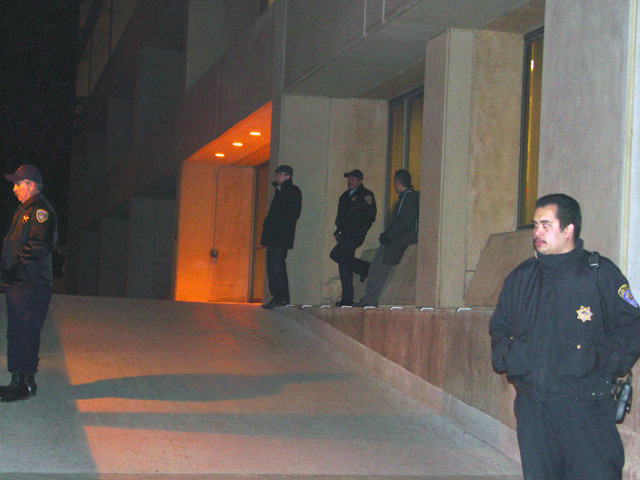 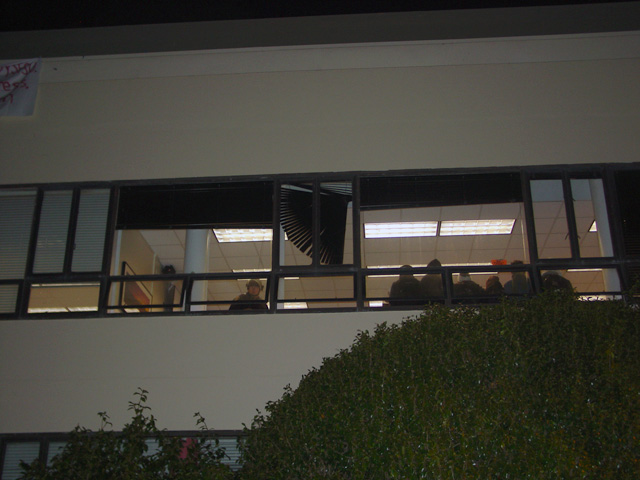 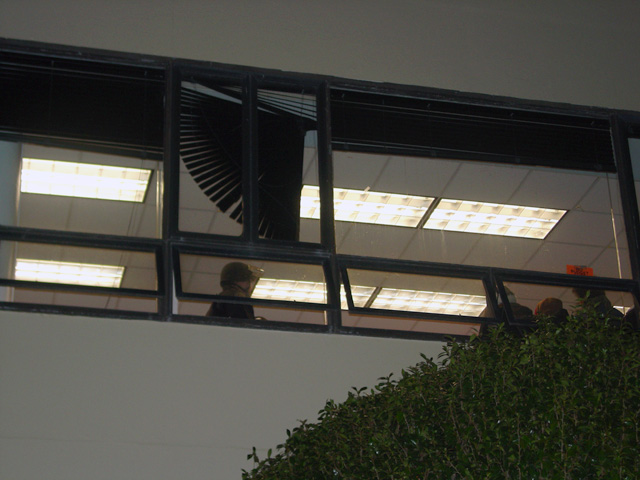 more on SFSU occupation:
http://www.indybay.org/newsitems/2009/12/1...
Add Your Comments
Support Independent Media
We are 100% volunteer and depend on your participation to sustain our efforts!