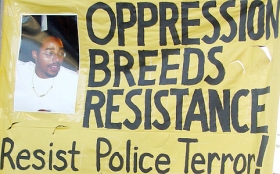 On Saturday March 21st, five people were killed, after police pulled over a man in East Oakland.

Copwatch13 writes: "[F]or the second time in recent months, police in Oakland shot and killed a young African American man apparently after prematurely resorting to the use of deadly force when alternative remedies were available.

"It all started at 1:15 p.m. near the 7400 block of MacArthur Boulevard in East Oakland. Police allege that Lovelle Mixon shot the two traffic officers and then fled. According to police, about two hours after the shooting, they had information which led them to believe Mr. Mixon was hiding alone in [an] apartment on 74th Avenue near Hillside Street. At that point, over 200 officers from the Oakland Police, Alameda County Sheriff's Office, BART Police and the California Highway Patrol surrounded the area where Mr. Mixon was believed to be.

"However, rather than attempt a carefully planned, negotiated, non-violent ending, and angry over the shooting of the two traffic officers, a hasty Oakland Police SWAT Team apparently rushed into the building armed with military rifles, assault weapons and other means of deadly force to use against Mr. Mixon. There was allegedly an exchange of gunfire between Mr. Mixon and the SWAT officers. It's not clear yet whether Mr. Mixon fired in self-defense, but no information suggests that he was a threat while he remained there alone. In the exchange of gunfire, Mr. Mixon was killed. Three SWAT officers were also shot, two of whom later died." Read more

On March 24th, a vigil organized by Oakland City Councilmember Desley Brooks was held at the intersection of 74th Avenue and MacArthur for the four dead police officers.

A vigil and rally for Lovelle Mixon and his family was held Wednesday, March 25 at 6pm at 7911 Macarthur Blvd. (at 79th) in Oakland.

Interview with Lovelle Mixon's Family | Lovelle Mixon, Police, and the Politics of Race/Rape | Fliers across East Bay and at cop funeral encourage more cop killing | Will OPD Swat Team Actions Ever Be Questioned? | In Honor of Lovelle Mixon: Cheering Those Who Fire Back | The ‘Karmic Justice’ of Lovelle Mixon’s Act | Support Economic and Social Justice, Not Police Containment in Oakland | "To Kill or Not to Kill... Be Killed or Not Be Killed... That is NOT our Question!" | On Lovelle Mixon, the Media and, Police Violence | Lovelle Mixon's Funeral - March 31, 2009 |