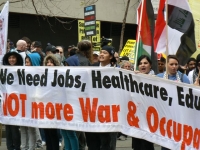 On Saturday, March 21st, protest marches took place across the U.S. and around the world on the sixth anniversary of the invasion of Iraq.

In the Bay Area, four days of demonstrations protesting the continuing war on Iraq commenced on Thursday, March 19th with leafleting at more than 20 BART stations during early morning and evening commuting hours, including El Cerrito and Pittsburg. In San Francisco, Iraq Moratorium held a protest at Montgomery BART, IVAW hosted an action at Civic Center BART (

Photos: 1 | 2), and a large rally was held at the 16th and Mission BART plaza, with a theme connecting the war in Iraq to oppression against people of color here at home. No Justice No BART was at Rockridge BART in Oakland (

Photos) and a fundraiser was held at Grand Lake Theatre.

The night before the Berkeley protest, a group of persons wearing masks smashed the windows and splattered red paint at the U.S. Marine Corps Recruiting Center.

All along the San Francisco peninsula the March 19th anniversary was marked with rush hour traffic vigils and leafleting. In Daly City, Women in Black leafleted rush hour BART commuters, while in Palo Alto and San Mateo, protesters held vigil at busy auto traffic intersections with signs and songs.

A number of events marked March 19th in Sacramento.

On Friday the 20th, vigilers with candles, signs, music and food rallied in the Golden Gate Park Panhandle.

On Saturday, March 21, a demonstration sponsored by ANSWER began with a march from Justin Herman Plaza at 11am culminating in a rally at Civic Center Plaza (

Flier). An Anti-Authoritarian Bloc also meet at Justin Herman Plaza at 11am. A group of people were attacked by police near the end of the event and several were arrested.

In the South Bay, the Coalition Against Occupation (CAO) covered the four corners of the major intersection at Winchester and Stevens Creek Boulevards in San Jose on both Saturday and Sunday, March 21st and 22nd. The CAO, formed with the goal of broadening the activist movement in the South Bay community, will also march on Saturday from Santana Park in San Jose, where they will meet and rally at 11:00am.

On Sunday, March 22nd, Peace Fresno’s 8th Annual Rally in the Valley for Peace and Justice was held in downtown Fresno.