Add an Event
Newswire
Calendar
Features
Home
Donate
From the Open-Publishing Calendar
From the Open-Publishing Newswire
Indybay Feature
Publish to Newswire
Add an Event
Related Categories: Peninsula | San Francisco | South Bay | Anti-War
Antiwar Protests: 6 Years and Counting
by Sharat G. Lin
Thursday Mar 26th, 2009 11:53 PM
Demonstrations on the sixth anniversary of the U.S. invasion of Iraq were smaller than during the Bush years owing to the “Obama factor,” but more unified than ever against the occupations of Afghanistan and Palestine. The most visible opposition to antiwar has shifted from flag-waving ultra-nationalists to the defenders of Israel. Despite this, far more American Jews demonstrated against the occupations than in support of Israel. 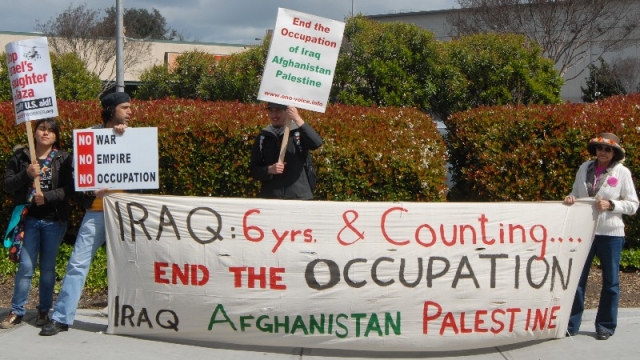 original image (800x450)
In the wee hours of March 20, 2003, U.S. bombs began falling on Baghdad and other “high-value” targets inside Iraq. In the United States, it was still the night of March 19th. The second U.S. invasion of Iraq had begun. U.S. military commanders predicted that within weeks or months the Iraqi government of Saddam Hussein would be toppled and the war would be over.

Six years later Saddam Hussein is long gone. An Iraqi insurgency has risen and then accepted payoffs to sequester its guns to patiently await the withdrawal of U.S. combat troops. Yet a low-level conflict drags on, and a majority of Iraqis continue to be outraged at the continuing U.S. occupation of their country. With the gradual U.S. troop drawdown in Iraq now a foregone conclusion, their continued presence in the country well beyond the dates set forth in the Status Of Forces Agreement (SOFA) agreed to between the U.S. and Iraqi governments is now becoming equally certain as the Obama administration settles into the White House / Pentagon bubble.

Six years later, people around the world are still demonstrating against that war, and there is no clear end in sight. Meanwhile, President Obama, who has promised “change we can believe in,” has signed an order to send 17,000 more American soldiers to Afghanistan and is actively considering raising that number to 30,000 additional troops. Meanwhile, White House political and military support for the Israeli occupation of the Palestinian West Bank and the Israeli blockade of Gaza continues unabated. In addition, U.S. cross-border missile strikes from Afghanistan into Pakistan are increasing in frequency and stirring outrage among Pakistanis against the U.S.

One protester summed up the situation as, “New president, same old war.”

Six years ago, the U.S. antiwar movement was profoundly divided over whether to include ending the Israeli occupation of Palestinian territories as an issue in antiwar actions. With the departure of MoveOn.org and other liberals from the protest scene after the election of a Democratic president, antiwar demonstrations have become smaller than during the Bush years. Yet the remaining antiwar movement has become more unified than ever against the occupations of Afghanistan and Palestine.

The San José Peace and Justice Center (http://www.sanjosepeace.org) and the Peninsula Peace and Justice Center (http://www.peaceandjustice.org) held demonstrations against war and occupation on March 19th in San José and Palo Alto respectively. Though much smaller than in previous years, there was much to talk about with the crises in the economy, financial system, healthcare, state budget, racial profiling by police, immigration raids, and relentless sanctions against Iran.

Stanford Says No to War (http://antiwar.stanford.edu), a campus group of concerned students, faculty, and staff, held a candlelight vigil in White Plaza in Stanford University on March 19th at 10:15 pm – the approximate time in California when U.S. bombs started falling on Baghdad. Participants reflected not only on the ills of war, but also on the significance of Condoleezza Rice’s return to Stanford and her role in justifying the U.S. invasions of Iraq and Afghanistan and torture.

The largest demonstration was led by ANSWER (Act Now to Stop War and Racism, http://www.actionsf.org) in San Francisco on Saturday, March 21st with an opening rally in Justin Herman Plaza, a march up Market Street, and a closing rally in Civic Center Plaza. However, the approximately 4,000 participants were substantially fewer than the 8,000-10,000 people who showed up on January 10th to protest the Israeli invasion of Gaza when President George Bush was still in office.

Antiwar protest actions were held in cities around the San Francisco Bay Area and throughout the nation. In San Jose and Santa Clara, One Voice (http://www.one-voice.info), South Bay Mobilization (http://www.sbm4peace.org), and Students for Justice (http://www.studentsforjustice.org) held antiwar demonstrations on March 21-22 at the busy intersection of Stevens Creek and Winchester Boulevards, where weekend vigils have been held weekly without interruption since the Iraq War began.

The only local counter-demonstration was by some fifty Israel supporters in front of San Francisco City Hall. The new primary opposition to antiwar appears to no longer be flag-waving right-wing Christian ultra-nationalists, but the unconditional supporters of Israel. While a section of American Jews have played a visible and vocal role in supporting Israel with its military occupation and blockade of Palestinian territories, it is worth noting that far more Jews (hundreds) participated in the antiwar demonstrations in the San Francisco Bay Area than the fifty who stood in front of City Hall.

While the smaller protests were completely peaceful, in San Francisco police aggressively targeted Arab youths under circumstances that remain unclear. Immediately following the arrests on Polk Street, a phalanx of police thrust its way into the antiwar rally from the southwest. ANSWER monitors in yellow vests responded immediately, not by confronting police, but rather by forming a human barrier between police and rally participants, thus averting a potentially violent clash. Meanwhile, western regional coordinator, Richard Becker, appealed through the ANSWER public address system to police to “get out of Civic Center Plaza” and “get out our rally.” After some hesitation, the order came down from police command to withdraw from the plaza back into Polk Street. Another ANSWER speaker then called upon rally participants to “leave the police alone” and get back to our rally, making it abundantly clear that averting provocation and violence was of paramount concern for rally organizers.

The second set of arrests took place in the Civic Center BART station where eyewitnesses said that Israel supporters taunted Arab youths for wearing kafiyehs and head scarves, and then reportedly sprayed the Arab youths with mace. Police cordoned off the entire BART station and arrested several Arab youths, while taking statements from the Israel supporters and letting them go free. Under such circumstances, racial profiling cannot be ruled out.

A potential reason for increased police aggressiveness now and in the coming years in Democrat-dominated San Francisco Bay Area cities is that local Democratic leaders may come under increasing pressure to squelch protests against the Democratic administration in Washington, DC. New president, same old struggle! 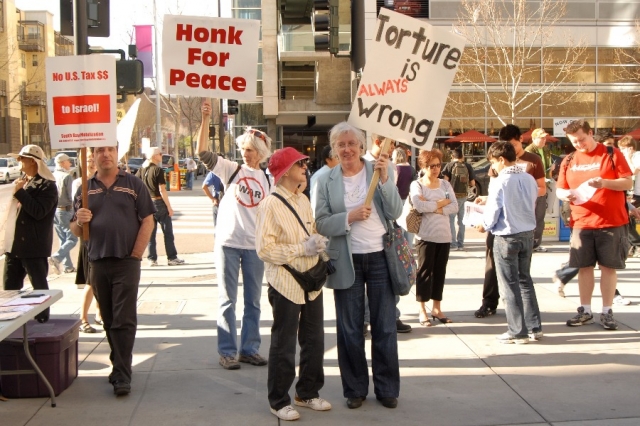 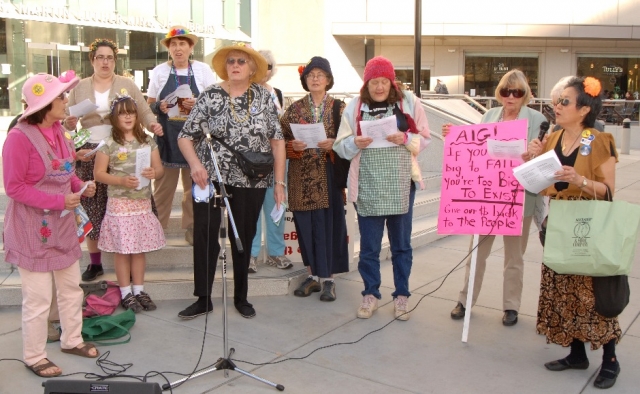 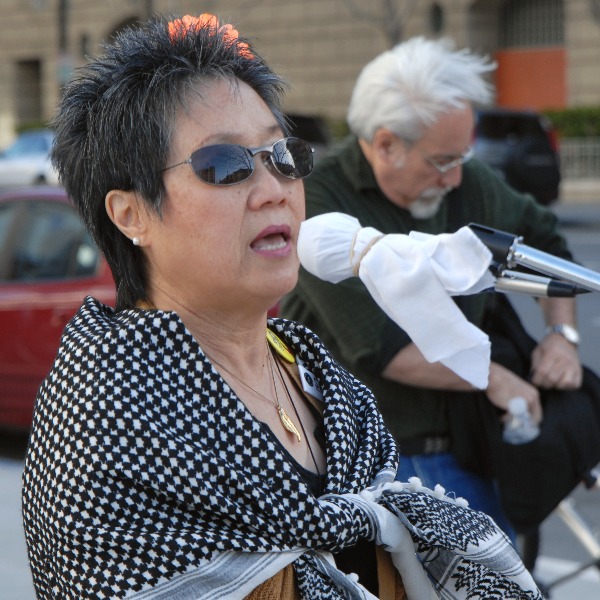 Shirley Kinoshita of the Raging Grannies said that when a passer-by, seeing her wearing a kafiyeh, asked if she was Palestinian, she paused for a moment and replied, “Yes, I am Palestinian!”
http://www.sanjosepeace.org
§Candlelight vigil at Stanford
by Sharat G. Lin Thursday Mar 26th, 2009 11:53 PM 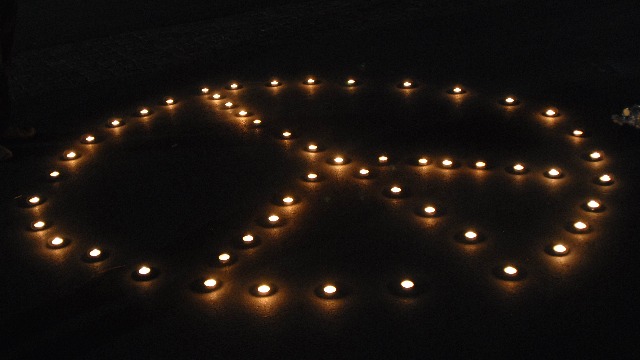 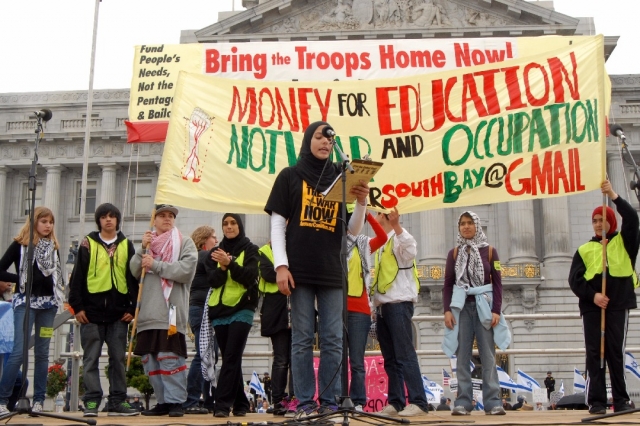 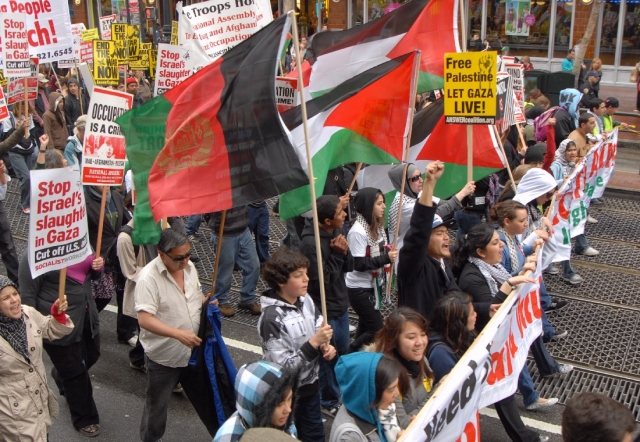 original image (1100x760)
Many South Bay ANSWER members walked behind the lead banners. Opposing the occupation of Palestine was as much an integral part of antiwar protests as the wars in Iraq and Afghanistan.
http://www.sanjosepeace.org
§“New president, same old war”
by Sharat G. Lin Thursday Mar 26th, 2009 11:53 PM 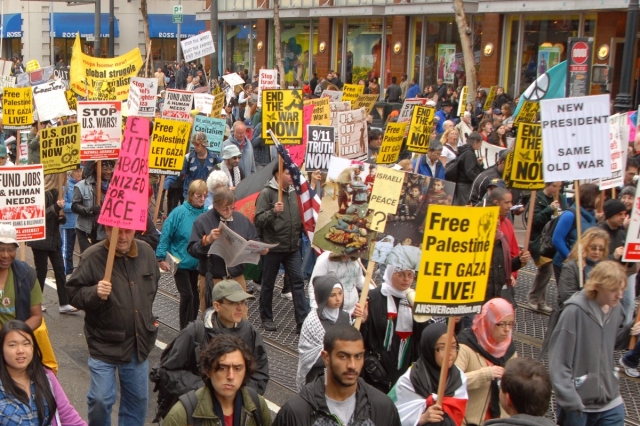 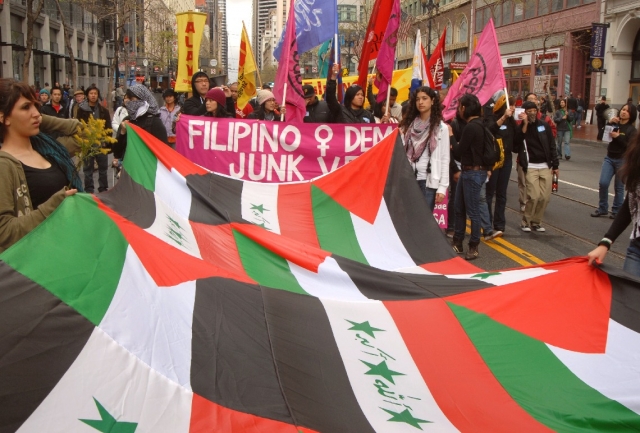 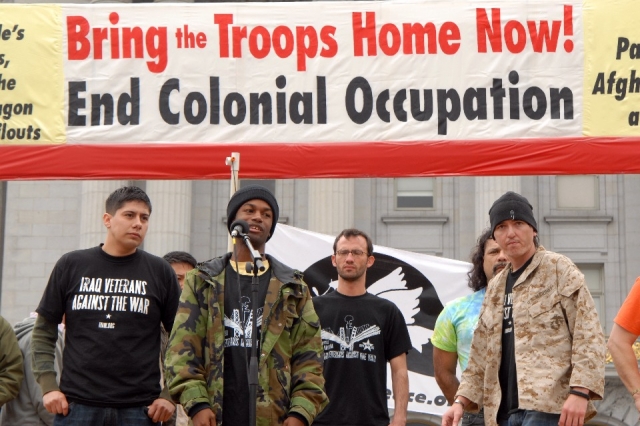 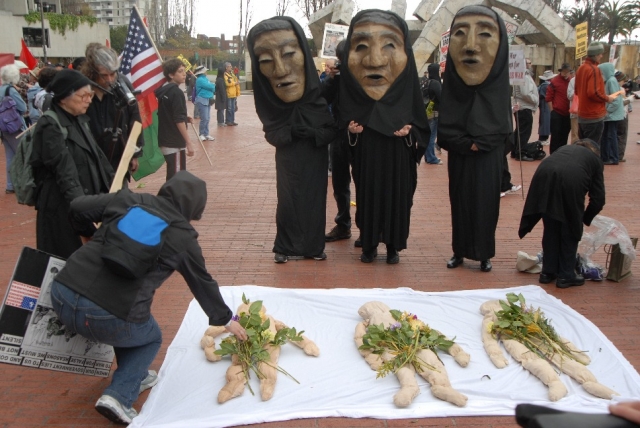 original image (968x648)
In San Francisco’s Justin Herman Plaza, Bay Area Women in Black symbolically mourned children who have died in war and occupation. The group is based on the movement of Israeli women initiated in Jerusalem in 1988 to oppose the Israeli violations of human rights in the occupied Palestinian territories.
http://www.sanjosepeace.org
§Jews for a free Palestine
by Sharat G. Lin Thursday Mar 26th, 2009 11:53 PM 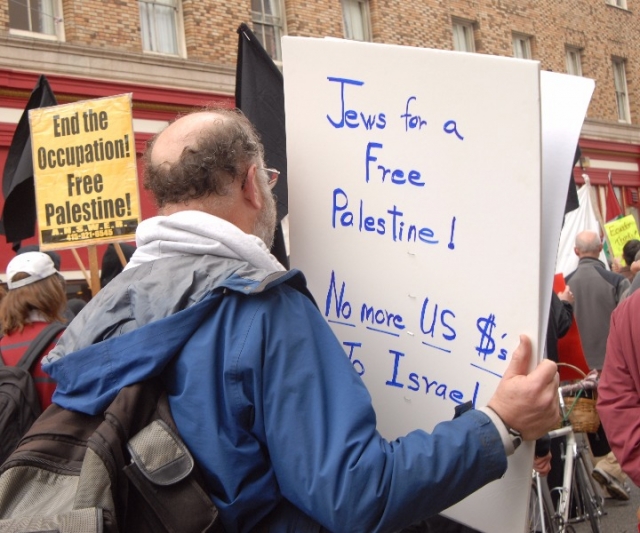 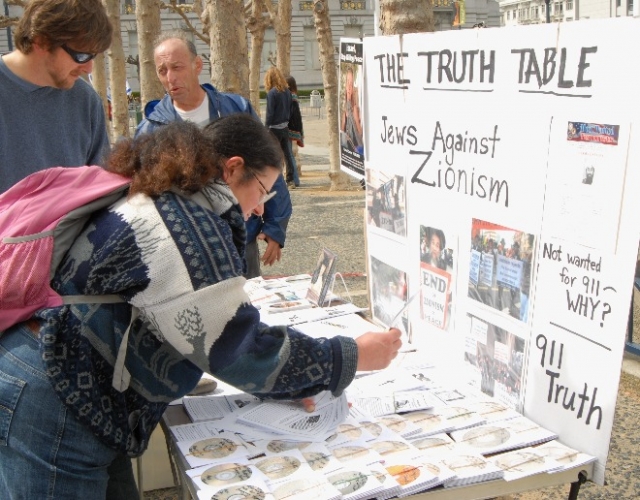 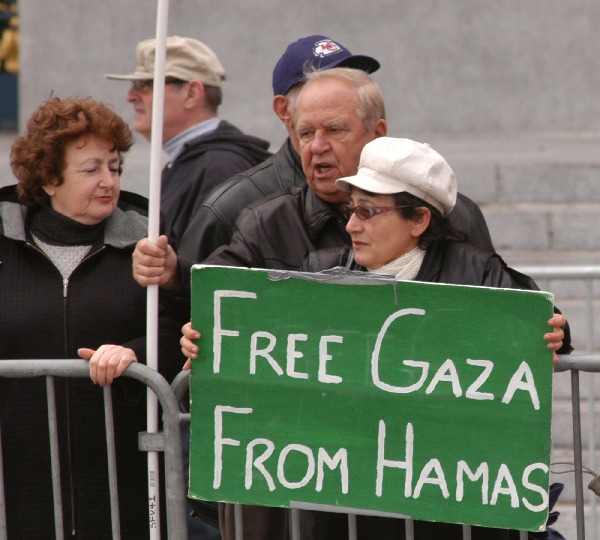 Supporters of Israel demanded that Gaza be “freed” from its duly elected government, a government that has upheld ceasefire agreements and agreed to negotiate a peace with Israel.
http://www.sanjosepeace.org
§Human barrier against police provocation
by Sharat G. Lin Thursday Mar 26th, 2009 11:53 PM 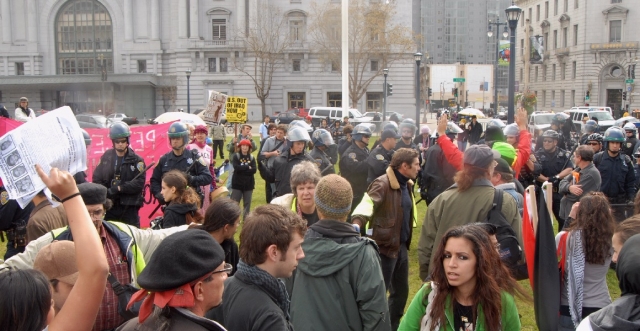 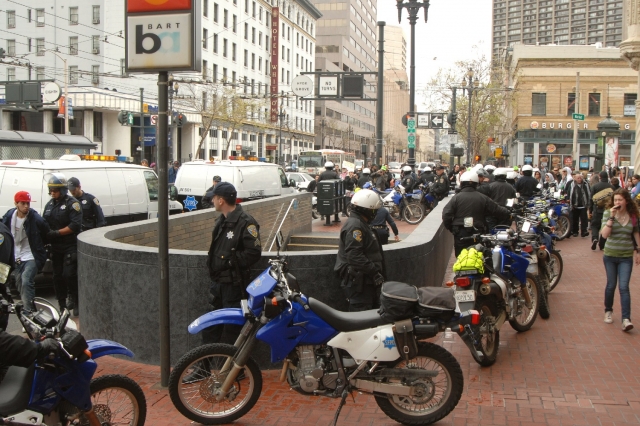 original image (1500x1000)
San Francisco police, cordoning off the Civic Center BART station, arrest an antiwar demonstrator (far left) after Israel supporters taunted Arabs and sprayed them with mace according to eyewitnesses.
http://www.sanjosepeace.org
Add Your Comments
LATEST COMMENTS ABOUT THIS ARTICLE
Listed below are the latest comments about this post.
These comments are submitted anonymously by website visitors.