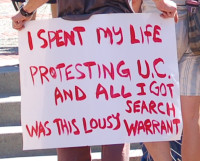 Following last month's raid of the venerable Long Haul Infoshop in Berkeley, the San Francisco chapter of the National Lawyers Guild (NLG-SF) says it is working with the Electronic Frontier Foundation (EFF) on a legal response on behalf of the Infoshop. Court filings reveal that the University of California, Berkeley, police obtained a warrant to search the Long Haul as part of an investigation into e-mail messages sent to UCB staff in the spring of 2008. Prior to the raid, the UCPD used court orders to obtain identifying information from the Long Haul's internet service provider, Sonic.net, and from Google. UC police are still holding the computers and data storage devices seized from Slingshot newspaper and other Long Haul tenants for analysis by a forensics team.

According to Carlos Villarreal, Executive Director of NLG-SF, "the conduct of the UC Police is reprehensible. They entered a community activist space with deadly weapons drawn and seized every computer, making no distinction between those used by independent media and those open to public use. They were able to invade people's privacy and seize all of this equipment based on the claim that threatening emails were traced back to this location. This would never be tolerated at a public library, a Kinkos, or a corporation with multiple computers and multiple users. The tactics used were abusive and violated basic First and Fourth Amendment rights."

In response to the raid, Long Haul supporters have held a protest on the UCB campus and tech volunteers held a weekend workshop to setup a new, more secure computing environment for Long Haul users powered by donated computers and open-source software.