Add an Event
Newswire
Calendar
Features
Home
Donate
From the Open-Publishing Calendar
From the Open-Publishing Newswire
Indybay Feature
Publish to Newswire
Add an Event
Related Categories: East Bay | Animal Liberation | Global Justice & Anti-Capitalism | Media Activism & Independent Media | Police State & Prisons
Computers Seized from Berkeley Activist Space
by via the EFF
Friday Aug 29th, 2008 7:36 AM
Friday, August 29, 2008 :Yesterday, the FBI, UC Berkeley police, and Alameda County Sheriff's deputies conducted a raid on the Long Haul Infoshop, a community space that is home to a number of leftist and anarchist groups, including a newspaper and a radio station. Armed with a warrant, authorities entered and quickly removed every computer in the Long Haul space. 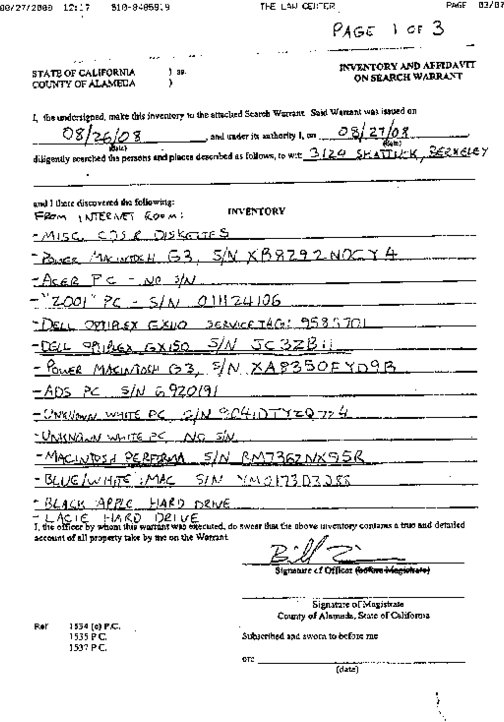 Download PDF (242.9KB)
According to the Associated Press, a UC Berkeley spokesman said that the raid was part of an investigation into threatening e-mails tracked to computers there. Among the computers seized were computers belonging to the Slingshot newspaper, and the Berkeley Daily Planet reports that police "got [Berkeley Liberation Radio's] hard drive." Even with a warrant, the authorities may have acted in violation of federal law when they seized the computers. The seizure of media computers would appear to be a violation of the Privacy Protection Act, which says that the authorities are not entitled to "search for or seize any work product materials possessed by a person reasonably believed to have a purpose to disseminate to the public a newspaper [or] broadcast." The purpose of the Privacy Protection Act is to ensure the freedom of speech and of the press. While there are exceptions to the act (such as when the documents seized themselves contain classified information or child pornography), the intent of the act is to prevent the government from using its search and seizure powers to shut down newspapers and radio stations, or otherwise interfere with the free flow of information to the public. The seizure of computers is of special interest to EFF, since the first case we fought — and won — was a result of the illegal seizure of several computers from Steve Jackson Games in 1990. In that case, the federal court held that the Secret Service violated the Privacy Protection Act, and ordered the agency to pay for the harm it had caused.
http://www.eff.org/deeplinks/2008/08/compu...
Add Your Comments
LATEST COMMENTS ABOUT THIS ARTICLE
Listed below are the latest comments about this post.
These comments are submitted anonymously by website visitors.