Add an Event
Newswire
Calendar
Features
Home
Donate
From the Open-Publishing Calendar
From the Open-Publishing Newswire
Indybay Feature
Publish to Newswire
Add an Event
Related Categories: East Bay | Animal Liberation | Education & Student Activism | Media Activism & Independent Media | Police State & Prisons
Copy of Affidavit used to obtain warrant in Long Haul raid
by Superior court
Tuesday Sep 9th, 2008 2:18 PM
Attached is a redacted copy of the affidavit which a UC Police officer swore out to get a warrant from an Alameda County Superior Court judge to raid the venerable Long Haul Infoshop on Wednesday, August 27, 2008. UC Police officers, with at least one FBI agent and county sheriff's deputy, descended on the peaceful space with guns drawn -- based on the flimsy pretext that someone(s) unknown had sent hostile letters to UC professors from computer(s) there. They then made off with all of the public and organizational computers, and have them still. 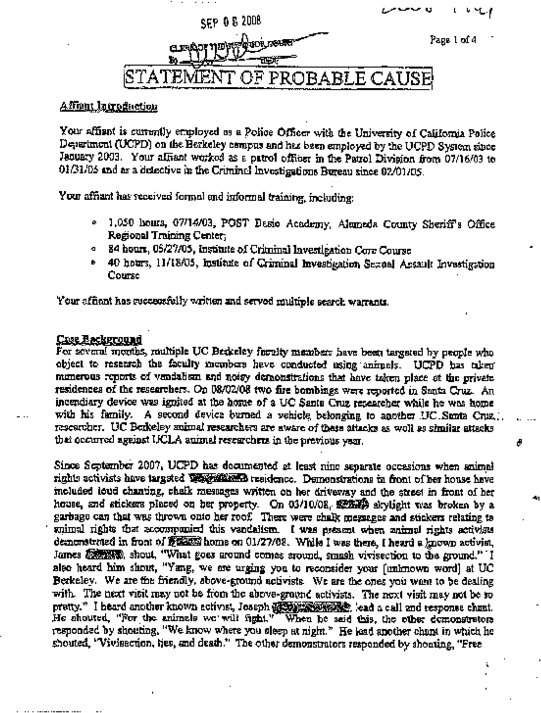 Download PDF (221.8KB)
Would these cops would raid a public library or commerical internet cafe and steal their computers, if they had traced such a letter back there?

How many of these raiders or their supervisors sanctimoniously proclaim that they live in a free society, wave a jingoistic flag in war, and intone about the Bill of Rights -- while they terrorize political community spaces and seize the computers of independent newspapers and prisoner support groups?

What is the community going to do about it?
Add Your Comments
LATEST COMMENTS ABOUT THIS ARTICLE
Listed below are the latest comments about this post.
These comments are submitted anonymously by website visitors.