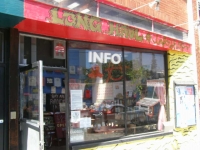 On August 27th at around 10:30am, 5-6 police officers from three agencies made their way into the Long Haul Infoshop in Berkeley, broke down every door, and confiscated all computers on the property. Computers taken included those used by the Slingshot Collective and East Bay Prisoner Support. Police also broke into cabinets, cut locks, and went through mail.

People arrived after being informed of the situation, and demanded that the police show a warrant. The police said they would show one once they were done, and they did. Both CopWatch and The Berkeley Daily Planet were there to cover the incident. The raid was conducted by the UC Berkeley Police, Alameda County Sheriff, and the FBI. The police stated that the computer equipment "may have been used to commit a felony." This is the first time there has been a raid since the infoshop opened 15 years ago.