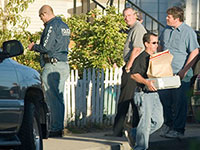 On August 7th, police raided a home on the 700 block of Riverside Avenue in Santa Cruz. It is the same home that was raided on February 24th, 2008. In the February raid, police assert that the home, or the people who were inside of it, were somehow connected to what they proclaim are animal rights activists that held a protest that allegedly ended with a scuffle at a UC Santa Cruz researcher's house. The raid on August 7th was apparently carried out by at least the Department of Justice, FBI, and UCSC police.

While police removed belongings from the front house on the property, other people were loading their items into trucks parked in front of the house. The people in the back house happened to be moving out at the same time that the police decided to raid the house in the front. Apparently nobody was home at the front house during the raid.