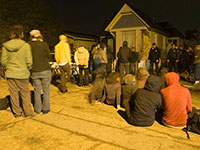 On February 24th, police broke through the front door of a home on the 700 block of Riverside Avenue in downtown Santa Cruz. For the duration of the police presence they declined to comment on their reason for being there, other than to say it was an "ongoing investigation." Comments on the newswire state that the police actions were in response to a demonstration that took place that morning at the home of a UCSC vivisectionist (animal testing by inflicting distress unto an animal to research the effects of a variable).

Riverside Ave. Neighbor writes, "We live right in the center of this activity and have been watching it grow since the police showed up originally. The whole experience has been a bit surreal. The police response has felt extreme from the beginning. We figured it was about serious amounts of really bad drugs, or a violent crime, or even murder..."