Add an Event
Newswire
Calendar
Features
Home
Donate
From the Open-Publishing Calendar
From the Open-Publishing Newswire
Indybay Feature
Publish to Newswire
Add an Event
Related Categories: Santa Cruz Indymedia | Animal Liberation | Police State & Prisons
Green Scare Tactics Return to Santa Cruz
by ~Bradley (bradley [at] riseup.net)
Monday Feb 25th, 2008 5:44 AM
On February 24th, police broke through the front door of a home on the 700 block of Riverside Avenue in downtown Santa Cruz at about 10pm. The Santa Cruz Police Department, UCPD, Santa Cruz County Sheriffs, and a Park Ranger all participated in the raid which took place after police officers spent the day monitoring the house and looking inside windows, including while a young women was taking a shower. Police refused to produce the warrant until they were leaving the house with their hands full of computers and other items that could be used to induce other other people to be compassionate.

According to somekid, the police presence was a response to a legal demonstration that took place on the same morning at the home of a vivisector at UC Santa Cruz. Experimentation upon living animals, also called vivisection, is a highly controversial practice that is being increasingly scrutinized and condemned throughout the entire University of California. Every year, tens of millions of animals are dissected, infected, injected, gassed, burned and blinded in hidden laboratories on college campuses and research facilities throughout the U.S. These innocent primates, dogs, cats, rabbits, rodents and other animals are used against their will as research subjects in experiments and procedures that would be considered sadistically cruel were they not conducted in the name of science. 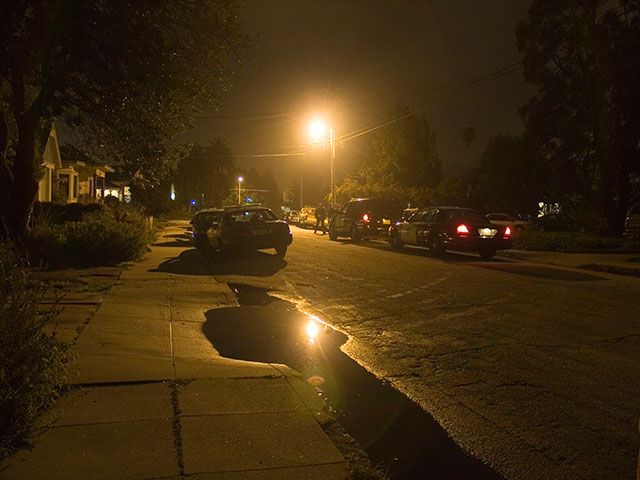 For more information on the police raid in Santa Cruz on February 24th, see:

For information on the Green Scare, check:

Green Is The New Red
http://www.greenisthenewred.com
§Contreras and Clark
by ~Bradley Monday Feb 25th, 2008 5:44 AM 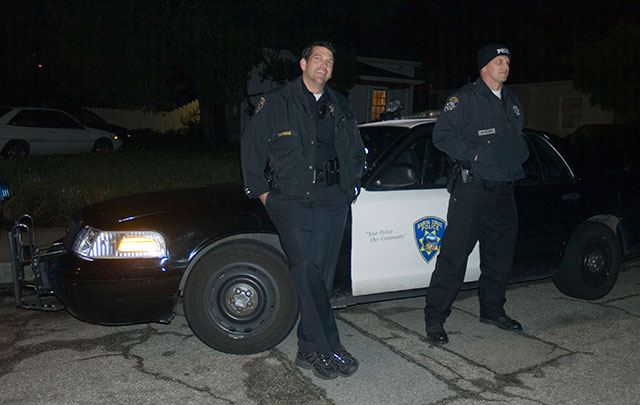 Tony Contreras of the UCPD and B. Clark of the SCPD keep their eyes on the house. Officer Contreras joked with me that I have more photos of him than his mom does. Tony, I think she should grab a camera and get out in the streets to Copwatch. Then she can help to prevent police brutality while getting some action shots of her little tough guy in blue ;-)
http://en.wikipedia.org/wiki/Copwatch
§Voyeurs
by ~Bradley Monday Feb 25th, 2008 5:44 AM 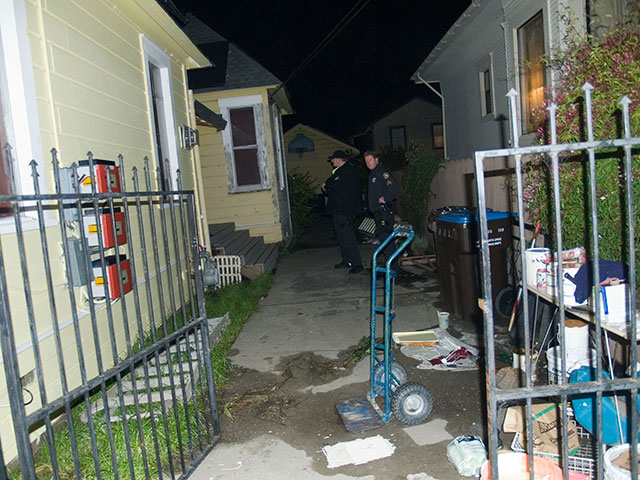 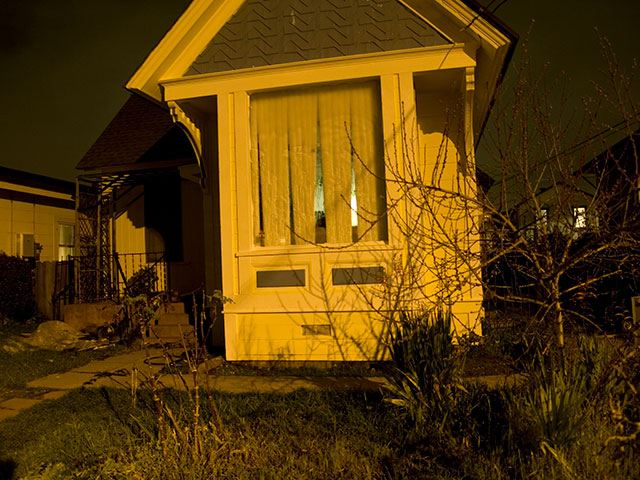 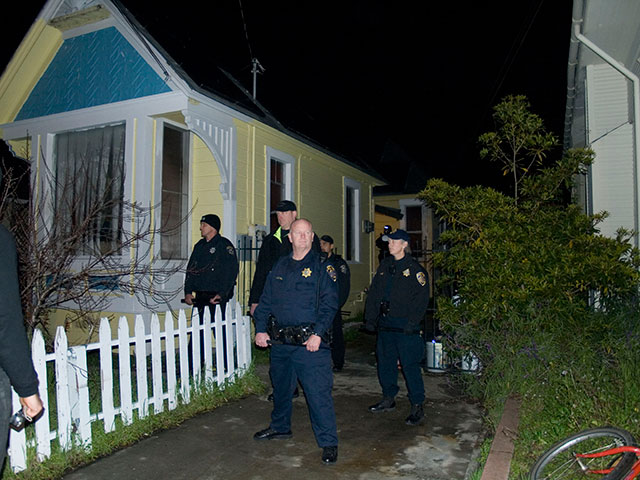 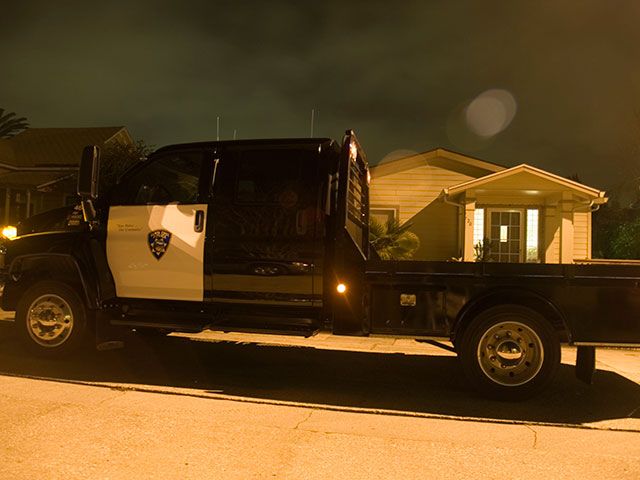 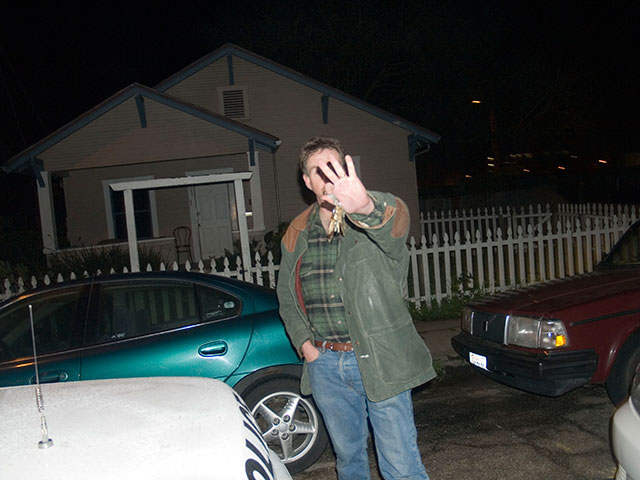 Frank Male, the landlord of the house and someone who loves animals, cooperated with police by giving them a key to the residence. Despite having a key, the police decided to break glass on the front door and bash it open with a battering ram.
§Rossi Towing
by ~Bradley Monday Feb 25th, 2008 5:44 AM 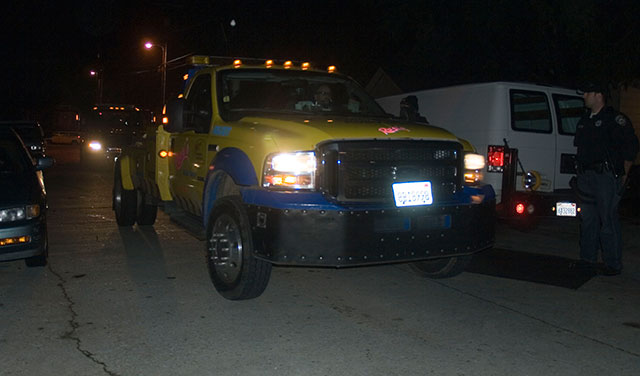 Rossi's Towing trucks arrived on the scene, presumably ready to tow cars, but their services were not utilized. The SCPD's tow truck was not used either, from what I could tell.
§Burglars
by ~Bradley Monday Feb 25th, 2008 5:44 AM 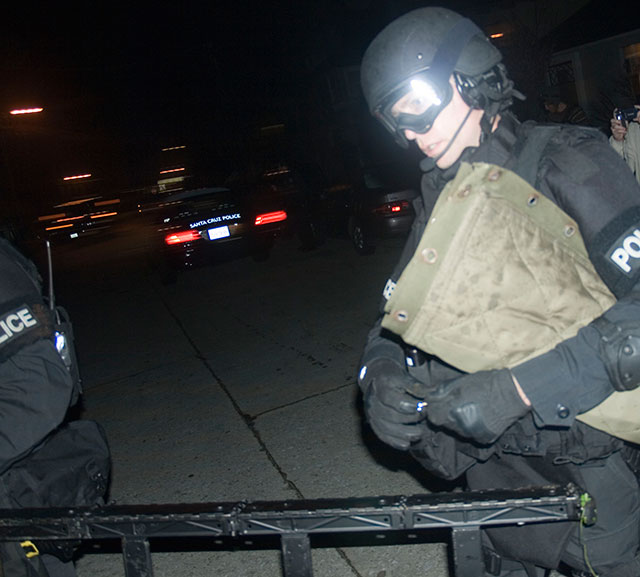 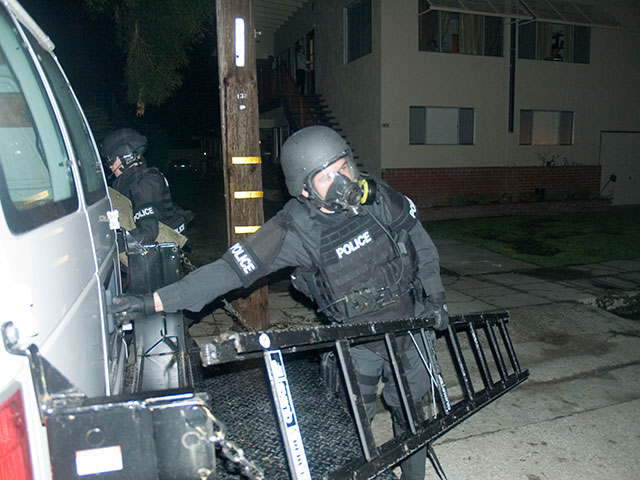 These burglars were seen trespassing through a private residence on Campbell Street. They used a ladder to get over a wooden gate and create a back entrance to the property.
§Gangsters
by ~Bradley Monday Feb 25th, 2008 5:44 AM 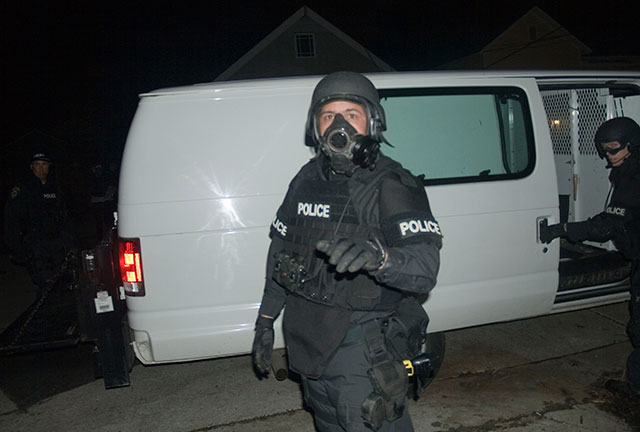 Some gangsters enjoy posing for a camera, but this one got really bent out of shape when I took his photo.
§Robber
by ~Bradley Monday Feb 25th, 2008 5:44 AM 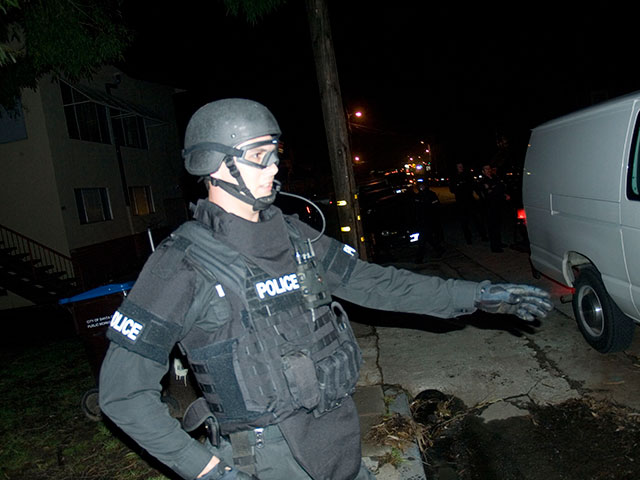 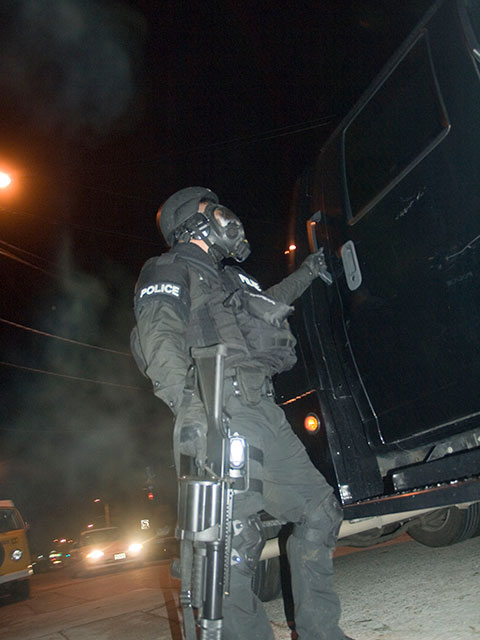 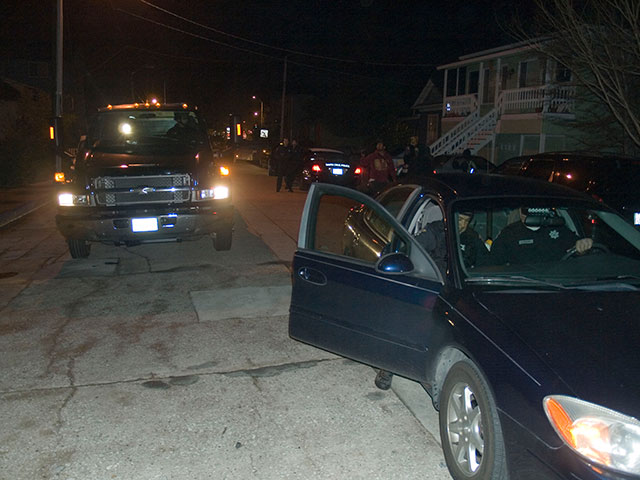 The sophistication, organization and seemingly endless resources of this gang make them America's most violent and dangerous criminal enterprise.
§Conspirators
by ~Bradley Monday Feb 25th, 2008 5:44 AM 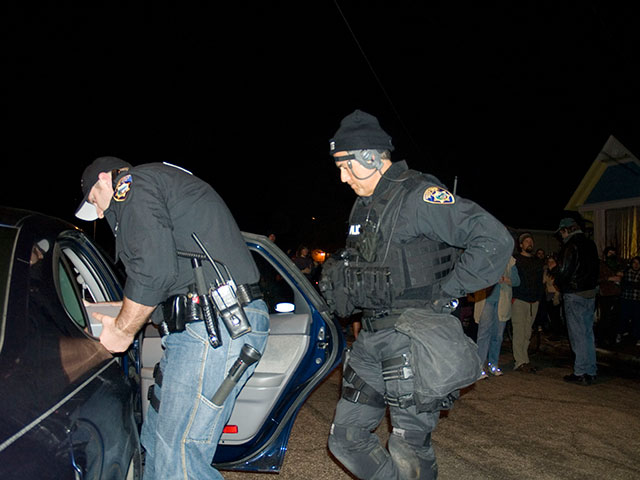 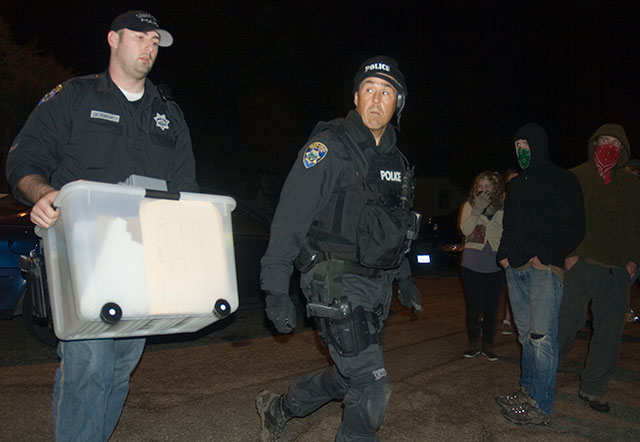 As police were entering the home, someone in the crowd outside yelled, "Look, they have to bring in the evidence."
§Taser
by ~Bradley Monday Feb 25th, 2008 5:44 AM 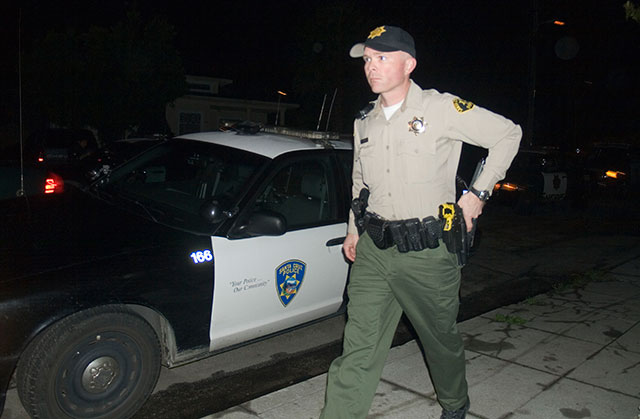 Santa Cruz County Sheriff packs a Taser, and then some..
Add Your Comments
LATEST COMMENTS ABOUT THIS ARTICLE
Listed below are the latest comments about this post.
These comments are submitted anonymously by website visitors.