Add an Event
Newswire
Calendar
Features
Home
Donate
From the Open-Publishing Calendar
From the Open-Publishing Newswire
Indybay Feature
Publish to Newswire
Add an Event
Related Categories: Santa Cruz Indymedia | Police State & Prisons
Police Outside of Home on Riverside Avenue
by ~Bradley (bradley [at] riseup.net)
Sunday Feb 24th, 2008 8:43 PM
Neighbors report that police have been waiting outside of a residence on the 700 block of Riverside Avenue in downtown Santa Cruz since about 2:00pm on Sunday, February 24th. Police declined to comment on their reason for being there, other than to say it was an "ongoing investigation." Approximately 25 people on bikes showed up at 7:15pm to witness the police in the side-yard of the residence and waiting on Riverside Avenue. There is speculation that the police are waiting for a warrant. 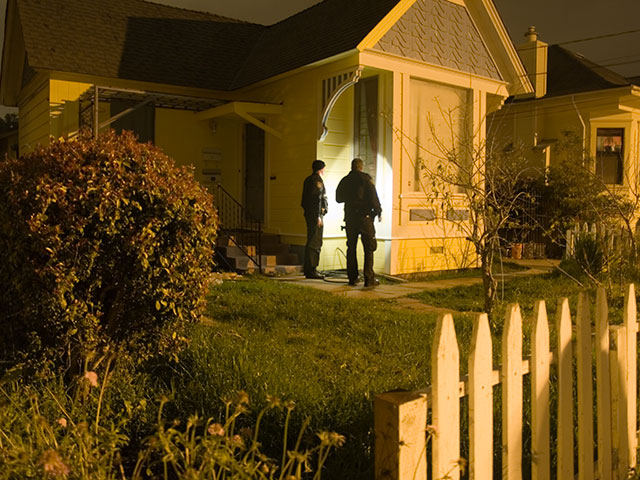 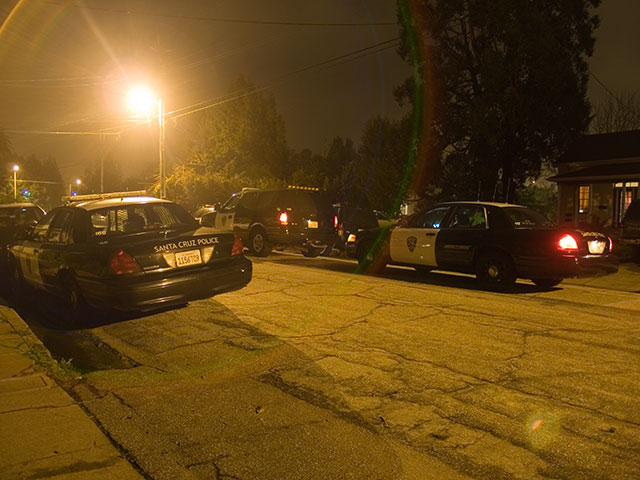 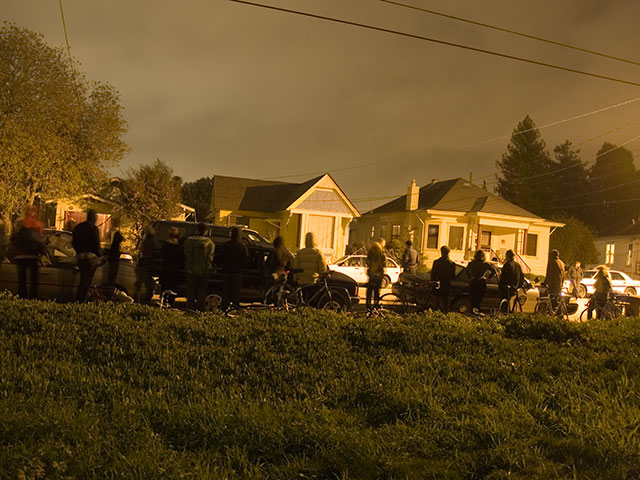 §Defend those that Defend Animals
by somekid Sunday Feb 24th, 2008 9:49 PM
This police presence is a response to a legal demonstration that took place this morning at the home of a known vivisector. Demonstrators were tracked down and this police presence is mostly meant to intimidate. Please show solidarity and support.
§A neigbhor's perspective
by Riverside Ave. Neighbor Sunday Feb 24th, 2008 11:24 PM
We live right in the center of this activity and have been watching it grow since the police showed up originally. It is still happening outside of my window, all over the street.

The police arrived with three cars, three uniforms, and a detective. The story we heard was, the police knocked on the door, the woman their opened it, saw it was the police, said, "Get a warrant," and closed/slammed the door. Since then the police have been increasingly present.

The detective and other officers spoke with folks in the neighborhood, asking about a specific car (with very generic details), and was there any activity or group of people that left earlier today. Another person told me they were asked about 'suspicious activity' or somesuch. Since then, no fewer than two officers have been present, more likely three since there have been no fewer than three police vehicles here all day. This included one or more University of California police cars.

The officers on vigil stayed usually across the street, where they could watch all the front entrances. At one point, the officers checked the perimeter of the property so they knew how someone could get out of the house, and have positioned officers all day to watch the exits.

Our presumption has been that they were waiting for someone(s) to exit, then they would be held for questioning. Otherwise, if the police had a warrant for arrest or search, they would have served it.

As the afternoon went on a few more people arrived. By the time we of sunset (5:45-ish), there were about twenty people across the street, standing quietly in a broken line behind the vigilant police. By 7:00 pm or so, the group had moved across the street, with the police on the actual property forming a loose line inside of the white picket fence. The people have been standing on the sidewalk on the other side of the fence.

Currently, I'd estimate there are ~12 police vehicles, including now four County Sheriff cars that arrived with a half-dozen deputies for reinforcement. There are about 20 officers at various parts of the property or patrolling up and down what is no longer a street but instead a police vehicle parking lot. The people number around 75, maybe more.

It has been quiet at times, then someone will start shouting for a badge number, or cursing the officers, or asking them if they know how to think for themselves. Lots of social stuff, people laughing, making jokes, "Call me if I don't call you first," hugs, and etc. Many, many flashes of photography going off. Some folks have been busy documenting the officers, getting their photos and the license plates of the police vehicles.

The whole experience has been a bit surreal. The police response has felt extreme from the beginning. We figured it was about serious amounts of really bad drugs, or a violent crime, or even murder, to require this many hours of vigil. When we found out it was about an animal rights activist and a protest, it seemed even more extreme. It's hard not knowing how to respond. If the police hadn't been holding a vigil, then likely their suspect or witness could have left the area. But the vigil has turned into a full-on protest, which I'm sure the police had no intention of causing yet they keep feeding into with their increased presence and silent as stone faces.

Hard to know what is going to happen here tonight. Will people get tired and leave? What exactly do the police think they are preventing with their huge presence? Will people continue to keep their protest relatively quiet and peaceful, or will they escalate?
§update 11 PM
by danielsan Sunday Feb 24th, 2008 11:30 PM 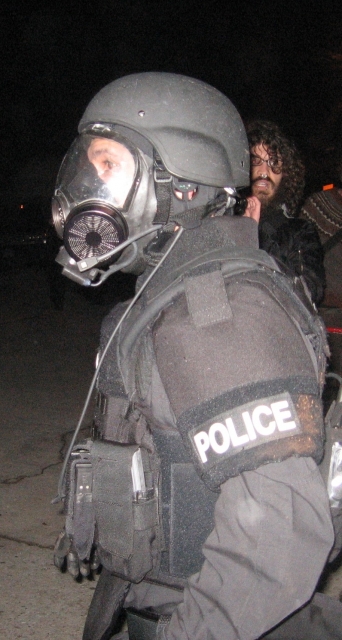 original image (796x1487)
As of 11:00 PM, there was still a huge police presence on Riverside and a large group of copwatchers and neighbors, friends and supporters. At around 9 or 9:30, police in full SWAT/Riot gear (including gas masks) entered the home by breaking windows and smashing through the door. Most refused to give any information, including their badge numbers. They still have not shown anyone outside a warrant or removed anyone from the premises. Cars from every conceivable jurisdiction and agency are on the scene, as are photographers from the Scotts Valley Sentinel and other media.
§Update 12:40 am - Police leaving/gone, and the people ...
by Riverside Ave. Neighbor Monday Feb 25th, 2008 12:51 AM
Happy-for-so-many-reasons to report that the police have exited the house on Riverside Ave., packed up their cars, and are gone into the night.. They began to exit the property, carrying bags and boxes, first to boos from the people. The police packed up the load, possibly taken as evidence?, and drove off. Almost instantly, people who had been in the house for hours began to emerge, to cheers from the people.

Right now there is a shrinking crowd outside, who all sound about the same as before, except more chatty and jubilant. Except for a few attempts to get a rise out of the police, the crowd of people was mainly respectful, and primarily present.

I like the term 'copwatcher'. We felt a bit like that today, watching the drama unfold, heat to a simmer, and slowly cool back down again. Glad this didn't splash over more than it did.

Expect to see lots of pictures; the cameras were flashing very often for hours. Lots of cellphone glows on people's faces as they called around. Lots of regular faces we recognized, local activists who got the call to show up and support Still curious how the whole story is going to turn out. What of this was necessary? Justified? Legal? Moral? Ethical? Weird? Our we lucky things didn't get worse here tonight? Or are we unlucky they got this far, this fast?
§Political Targeting
by Student Activist Monday Feb 25th, 2008 2:22 AM
Only one cop needs to show up with a warrant in order to search the premises. At the height of this scare tactic, 17 squad cars, including UC Police and a Parks Service Vehicle, and at least a couple unmarked police vehicles were present.

The word going around is that the police followed protesters home from a legal street protest encompassing animal rights and vivisection (animal testing by inflicting distress unto an animal to research the effects of a variable). Had this been any other form of protest, these people would not have received the same treatment: being surrounded, having strangers nosing around your windows, having their doors and windows broken, having armored police officers enter their homes pointing automatic rifles in the faces of unarmed house-members without warrant for search, being arrested without charges, and having box loads of personal property stolen from their house, not to mention any technological surveillance equipment installed while the house-members were being held hostage inside a secluded room of the house. But because Animal Rights or intelligent speech about it is sooo very much harmful to our government and commerce, it must be suppressed at all costs regardless of individual freedoms, constitutionally determined rights and laws.

I feel that if protests were treated regardless of content, first no search warrant or other intimidation tactic would be used, and even if so, the protesters on the sidewalk this night (the same fashion as the protests of earlier that day) would have warranted the same police behavior, targeting all of them as intelligent members of society.

A man who lived on the opposite side of the block, sharing the same fence, said he believed the police assault-team clearly trespassed onto his property to cross into the targets' house, and may have also damaged the fence crossing. Another house may have also sustained police-inflicted property damage, but the owner could not be found to comment.

The Santa Cruz Police are THUGS, and will do anything they are ordered to do. One police officer stated, "I'm just doing my job." Yeah? That's the excuse Nazi's used when they murdered minorities throughout Europe.

Welcome to your police-state. The people are waking up to a world of fascism, where order is enforced rather than community safety.

(I had heard that the landlord of the house had given police a door key to avoid the cost of replacing the door when the police smashed it in, but they smashed the windows in anyway because it scares the shit out of those who live there. Police do not work for justice so much as for intimidation and thuggery. They will go out of there way to keep the people in fear and subsequently in line. Once you realize a police does not even support your interests, and is rather a grunt to maintain a productive economy, then you will also realize the state of control they have over the general people.)
Add Your Comments
LATEST COMMENTS ABOUT THIS ARTICLE
Listed below are the latest comments about this post.
These comments are submitted anonymously by website visitors.