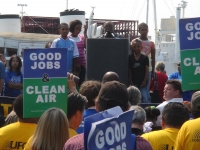 On July 22nd, over 3,000 people rallied at the Port of Oakland to protest against pollution and poverty. The event was co-sponsored by the Coalition for Clean & Safe Ports, the California Labor Federation, and the Central Labor Council of Alameda County. Teamsters General President Jim Hoffa, Los Angeles Mayor Antonio Villaraigosa and Oakland Mayor Ron Dellums were among those who spoke at the protest.

Many truck drivers at the port are classified as "independent contractors" and make as little as $8 an hour while receiving no benefits. The port trucking system requires drivers to sit idle in their trucks for hours everyday while their trucks spew out diesel emissions. Port diesel pollution is associated with high rates of cancer and asthma. Diesel pollution is five times higher in West Oakland than in other parts of Alameda county. As a result, cancer and asthma rates are higher in West Oakland than other parts of the Bay Area.

The Port of Oakland is developing a Comprehensive Truck Management Plan (

pdf). In March, 2008, the Port Commission began the process of instituting a new trucking model to reduce diesel emissions. In an effort to achieve an 85% reduction in health risk from its operations by 2020, the Commission voted unanimously to levy fees on containers passing through the Port. The fees are expected to generate $520 million and will be used to mitigate air pollution by retrofitting and replacing dirty trucks.

The Commission directed Port staff to hire a consultant to conduct an Economic Impact Study on making drivers employees of the trucking companies, and to report back to the Commission on the next steps to phase in the Comprehensive Truck Management Program by the end of June. The Commission, however, failed to include any language that addresses how to institute an effective local hire program. Questions also remain as to how much of the old dirty truck fleet will be replaced through the container fees and how much of the costs of truck replacement, upgrades and maintenance will be shouldered by low-wage truck drivers.