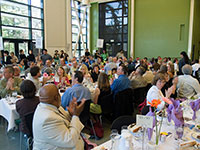 The All-Alumni Reunion Luncheon held in the College 9/10 multipurpose room at UC Santa Cruz on April 26th was interrupted when students marched in demanding fair contracts for UCSC's underpaid service workers. The luncheon was part of the annual UCSC Reunion Weekend where alumni were invited back to campus to "learn how innovation is going global, sip wine, tour new facilities on campus, explore the "unnatural" history of UCSC, and more..." The brief interruption was widely supported by alumni who clapped, smiled, listened, and took souvenir photos as students passed out flyers, chanted and spoke on stage to inform alumni about the contract campaign for UC service workers.

Since August the UC and the service workers' union, AFSCME Local 3299, have been negotiating a new three-year contract. These negotiations present an important opportunity for workers to receive more recognition for their hard work. While George Blumenthal and other UC executives have declared their support for labor, little has been done to meet the demands of the workers.

David Sackman comments, "I opened the door. I was the alumnus who opened the door, letting in the protestors supporting the University workers. To answer a previous post: No, it was not planned that way. I have no idea how the organizers of the protest planned it. I just know that I found myself on the wrong side of a picket line. To someone who has been involved in the labor movement since I attended UCSC myself, this was intolerable. So I opened the door, and invited my guests in." Read More