Newswire
Calendar
Features
Home
Donate
From the Open-Publishing Calendar
From the Open-Publishing Newswire
Indybay Feature
Publish to Newswire
Add an Event
Related Categories: Santa Cruz Indymedia | Education & Student Activism | Labor & Workers
"Students, Workers and Alumni for Justice!" at UCSC Reunion Weekend Luncheon
by ~Bradley (bradley [at] riseup.net)
Sunday Apr 27th, 2008 12:33 AM
The All-Alumni Reunion Luncheon held in the College 9/10 multipurpose room at UC Santa Cruz on April 26th was interrupted when students marched in demanding fair contracts for UCSC's underpaid service workers. The luncheon was part of the annual UCSC Reunion Weekend where alumni were invited back to campus to "learn how innovation is going global, sip wine, tour new facilities on campus, explore the "unnatural" history of UCSC, and more..." The brief interruption was widely supported by alumni who clapped, smiled, listened, and took souvenir photos as students passed out flyers, chanted and spoke on stage to inform alumni about the contract campaign for UC service workers. 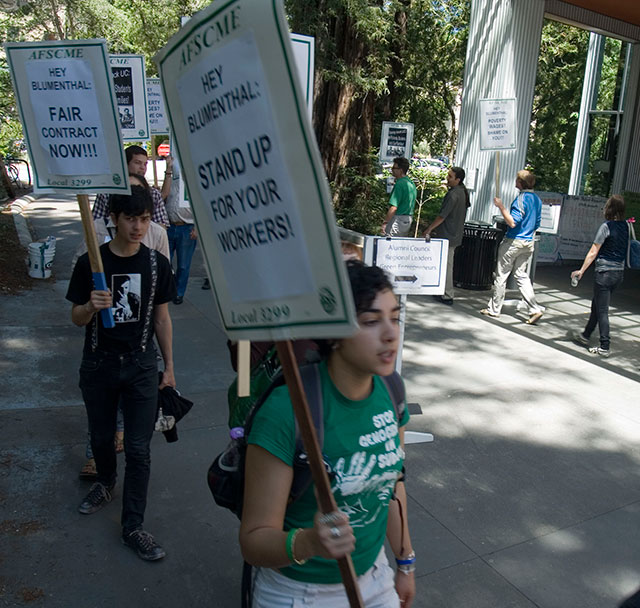 ** PLEASE SEE THE FIRST SET OF PHOTOS AND THE TEXT OF A FLYER AT:


"Students, Workers and Alumni for Justice!"

Two awards were given out. One to a faculty member and one to a UCSC staff member. Stephen Gliessman, Alfred E. Heller Professor of Agroecology, received the Distinguished Teaching Award; Bob Hastings, director of Current Students in the Division of Graduate Studies, received the Outstanding Staff Award.

Steve Gliessman accepted his award following the interruption and advised the administration and alumni that they should "listen to students."

Another speaker, David Sackman, told his fellow alumni that the interruption was an example of why he went to school at UC Santa Cruz. An L.A. native, J. David Sackman tries to reconcile the two Jewish traditions in his family (Orthodox and Anarchist) through his job as an attorney for workers, unions and union trust funds, enforcing the commandment of Deuteronomy 24:14-15.

On April 25, 2008, the day before the All-Alumni Reunion Luncheon, an opinion piece by Sackman appeared at JewishJournal.com called, "Black-Jewish Passover not about blame." People should read the entire piece and challenge themselves to work for social justice by standing up to oppression everywhere it exists. The essay was originally posted on April 12th as a comment on The God Blog by Brad A. Greenberg. The following is an excerpt from Sackman's essay:

Black-Jewish Passover not about blame
By J. David Sackman

"Why was I commanded to tell the story of Passover to my children? I do not believe it is to exchange blame, as I see being done today. No. I believe it is to remember that his ancestors, on both sides, suffered from oppression, and must oppose oppression whenever they see it again. It is my duty, which I must pass on to him, to stand up against such oppression today, whether against my own people or others.

"I will tell my son of one of my own heroes. Not Moses or Jesus or the Rev. Martin Luther King Jr., but someone very few people ever heard of: Sigismund Danielewicz.

"Danielewicz was a Jewish barber from Poland who became one of the most prominent leaders and organizers of California Labor in the 1880s. His downfall came at the convention called in 1885, which was the forerunner to the current California Federation of Labor. The main issue on the table was a resolution to drive the Chinese from the state within 60 days, by force if necessary. Danielewicz alone spoke out against the resolution. He pointed out that he was a member of a race still persecuted, and challenged each group there to say whether the persecution of the Chinese was more justifiable than the persecution they had suffered themselves. His call for unity among labor was jeered, and he was declared out of order. The resolution passed, and was the justification for a virtual pogrom of deadly violence against the Chinese in the months that followed.

"Danielewicz sank into obscurity. He was last seen homeless and on foot toward the East Coast in 1910. Why then do I idolize a man who was driven from the podium and doomed to obscurity? Because he had the chutzpah to stand up against oppression, no matter what the cost, simply because it was the right thing to do."
§AFSCME Local 3299
by ~Bradley Sunday Apr 27th, 2008 12:33 AM 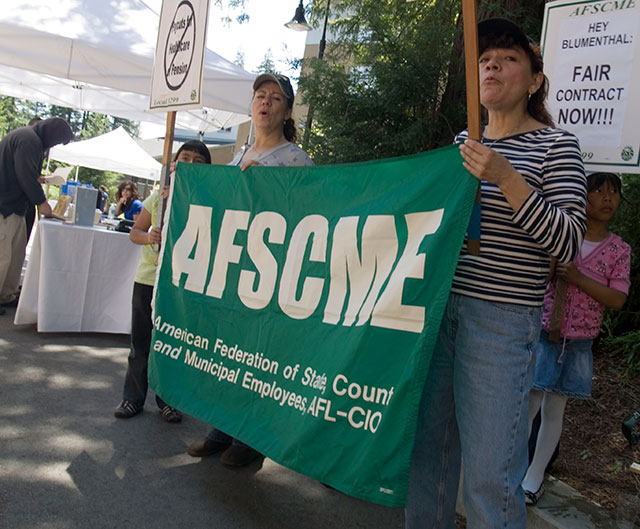 AFSCME 3299 is a statewide union organizing University of California service and patient care workers to stand up for better working conditions.
http://www.afscme3299.org
§Greatful Slug
by ~Bradley Sunday Apr 27th, 2008 12:33 AM 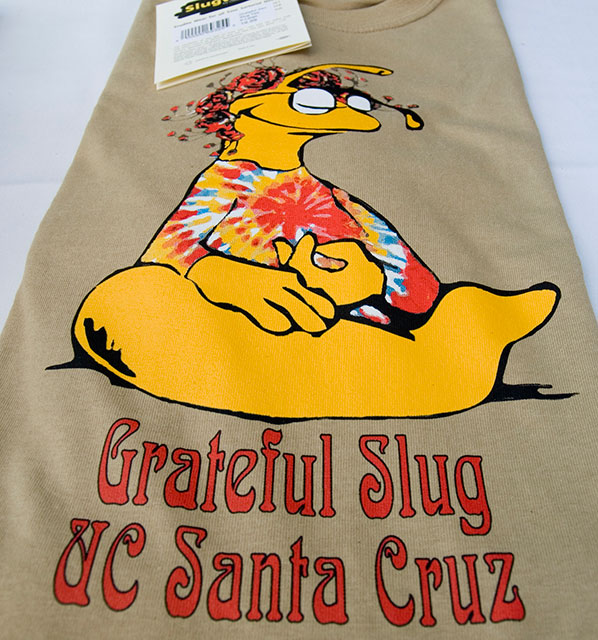 It did not take long for UCSC to start selling "Greatful Slug" T-Shirts following the donation of Greatful Dead archives to UCSC's McHenry Library.

The announcement came four days after thousands of students celebrated 420 at UC Santa Cruz, despite significant measures by the administration to prevent the annual countercultural gathering. 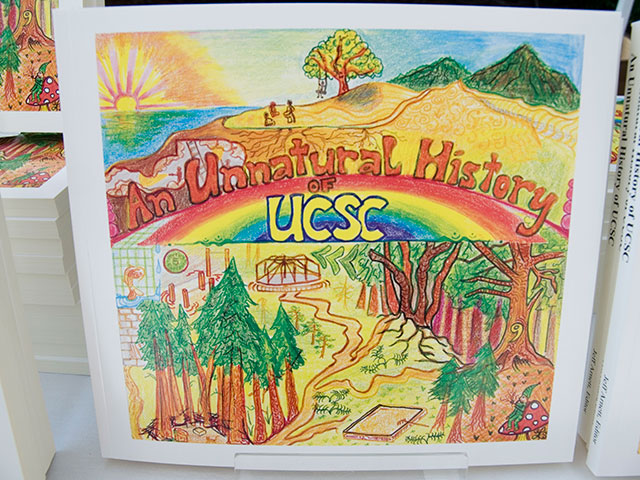 "There are many fabled sites in UCSC's Upper Campus Redwood forests. Many of these sites are known and visited by UCSC students and faculty as well as nature and mountain-biking enthusiasts from the surrounding area. Additionally, Upper Campus offers an alternative commuter's route to campus from such areas as Bonny Doon.

"A Spring 2007 writing class at UCSC documented the fables of Upper Campus. Jeff Arnet and his 30 students described 35 natural and man-made sites in Upper Campus, including Tree 9 and the "Hobbit Hole". Along with the book, "An Unnatural History of UCSC", a DVD was to be included. The book is available at UCSC's McHenry Library." 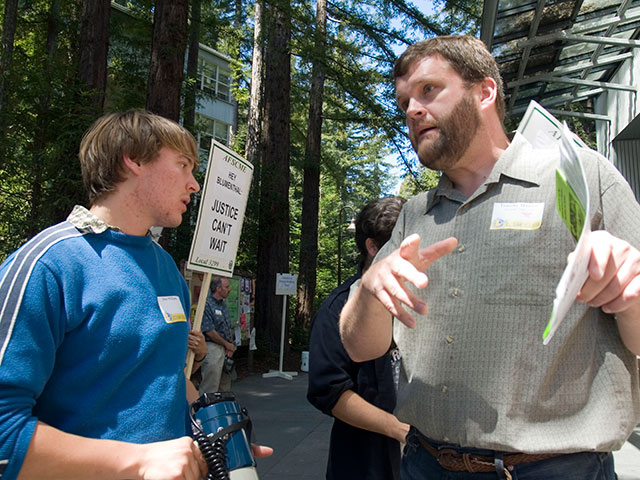 Thomas decided to inform students how they should, and should not, struggle in solidarity with the workers for a fair contract. It seems that the Student and Worker Coalition for Justice is very open to positive actions by alumni in support of campus workers. Perhpas alumni who know how to get justice should organize themselves and get some justice for the workers on campus. The workers at UCSC, and students, continue to use a diversity of tactics in the fight for wage parity that has been going on for many years. 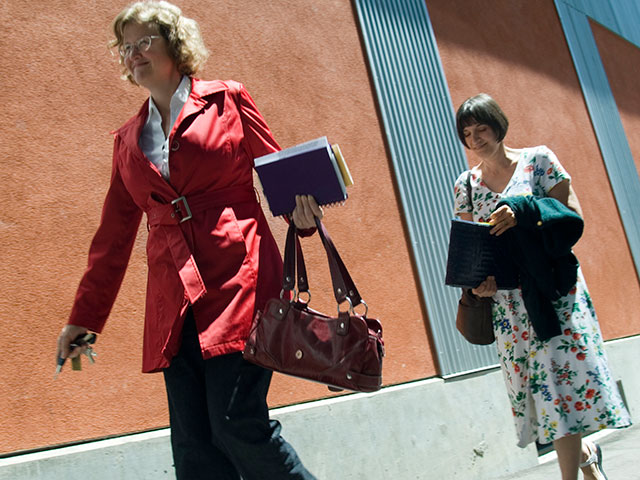 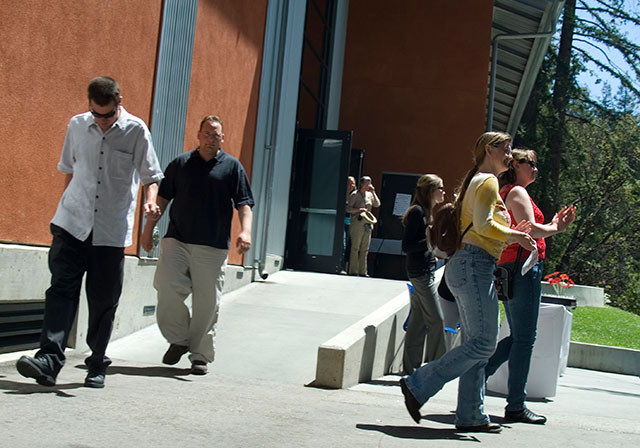 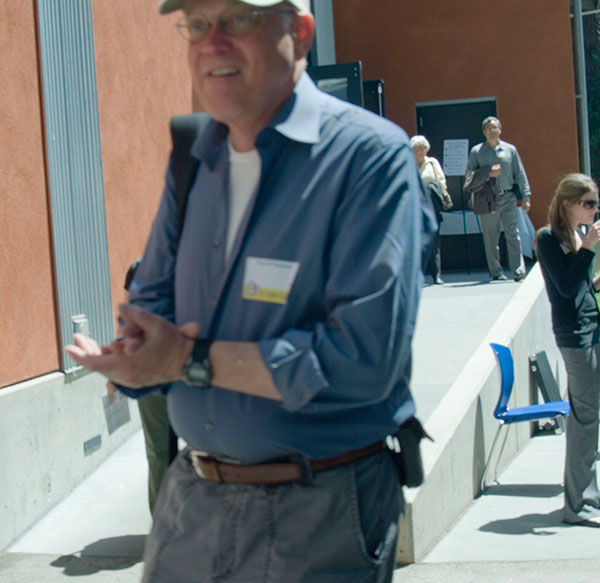 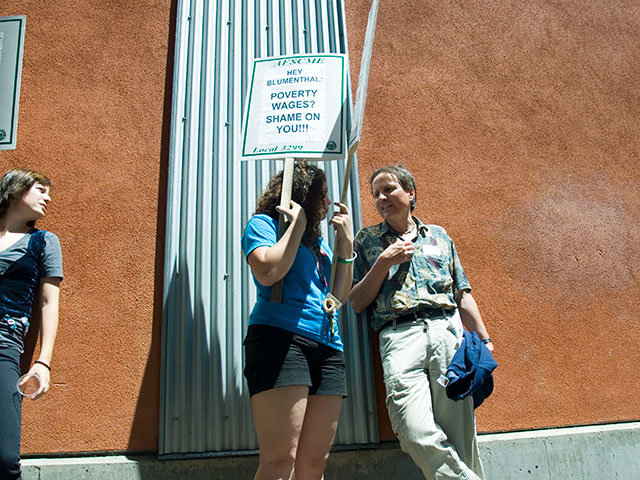 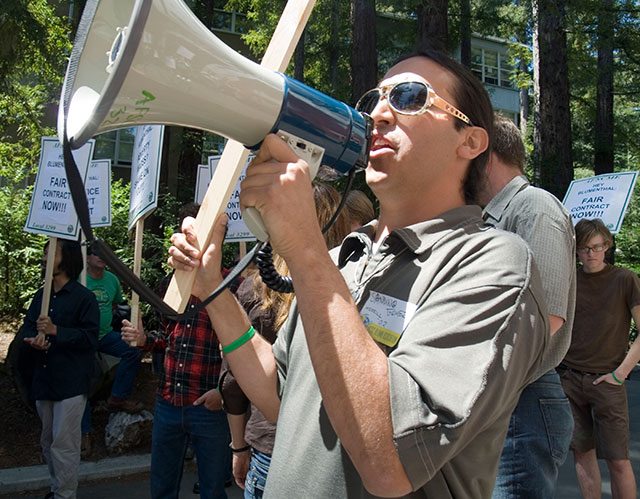 "As an alumni I want the administration to know that I'm not going to give anymore money unless they agree to share it with the people who do the work that makes the University run. The time for a fair contract is NOW!" -Sandino Gomez, Merrill College 2002
§AFSCME and SWCJ
by ~Bradley Sunday Apr 27th, 2008 12:33 AM 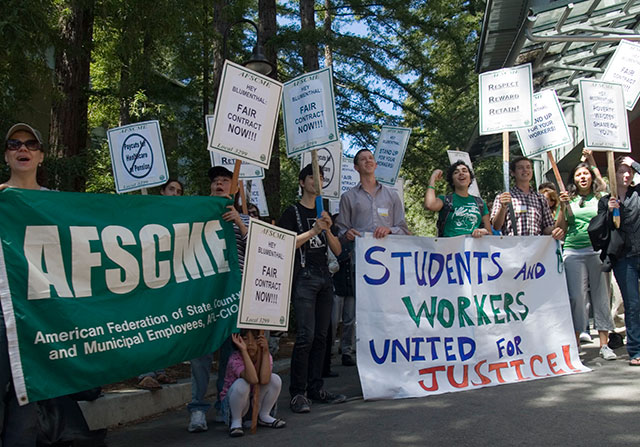 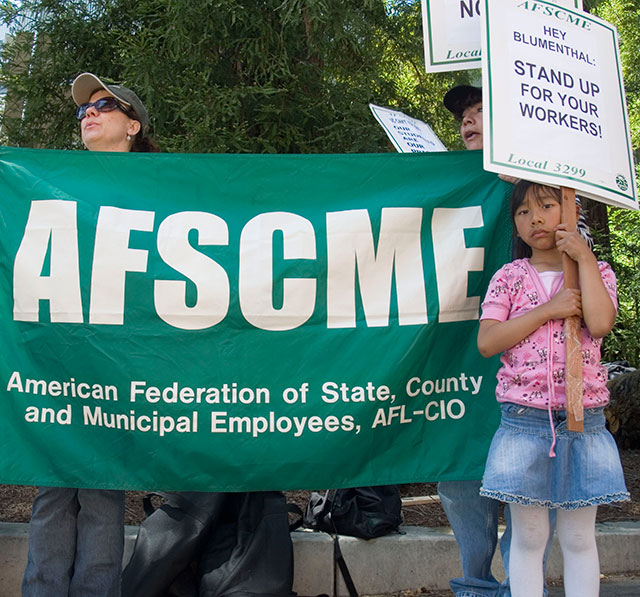 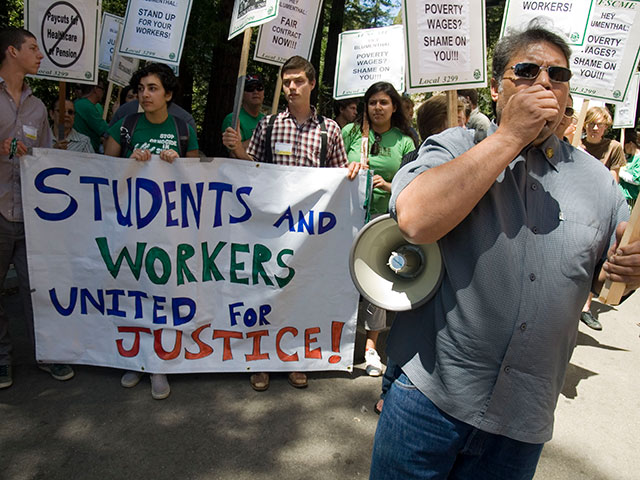 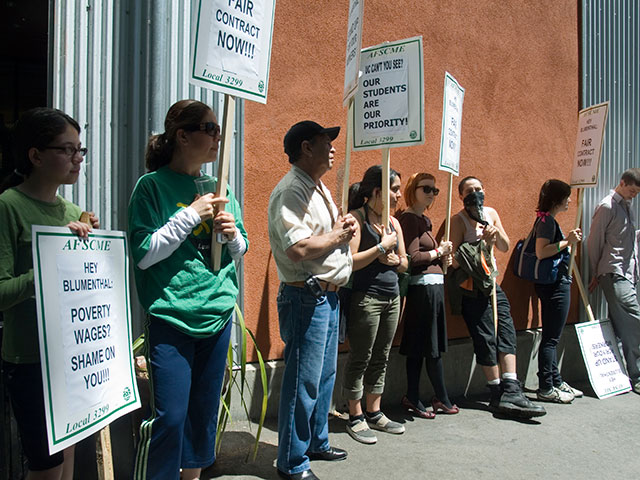 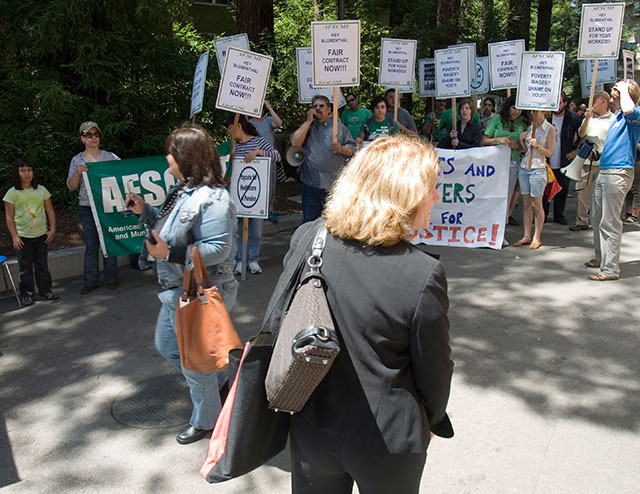 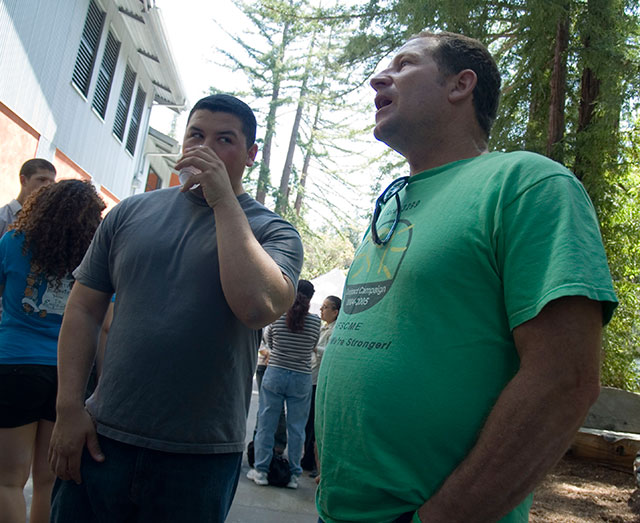 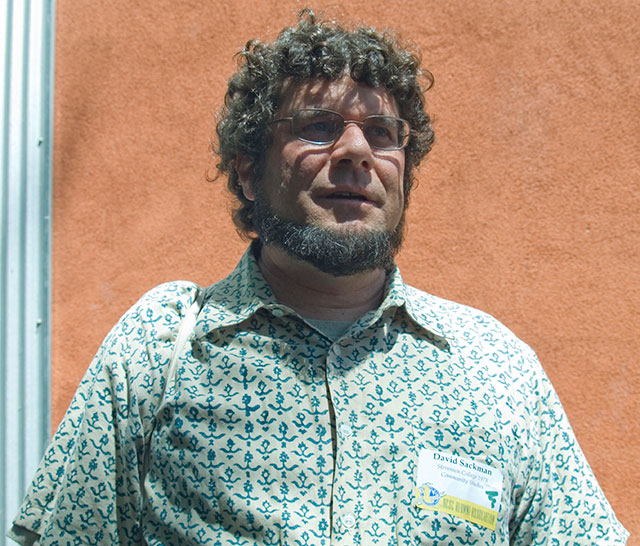 David Sackman told fellow alumni, as well as students, that the interruption was an example of why he went to school at UC Santa Cruz.

An L.A. native, J. David Sackman tries to reconcile the two Jewish traditions in his family (Orthodox and Anarchist) through his job as an attorney for workers, unions and union trust funds, enforcing the commandment of Deuteronomy 24:14-15. He belongs to Beth Shir Shalom in Santa Monica, with his wife and youngest son (to whom the piece below is addressed). 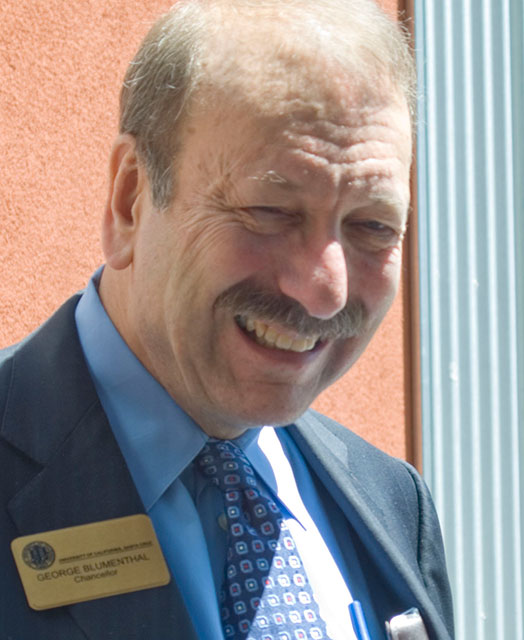 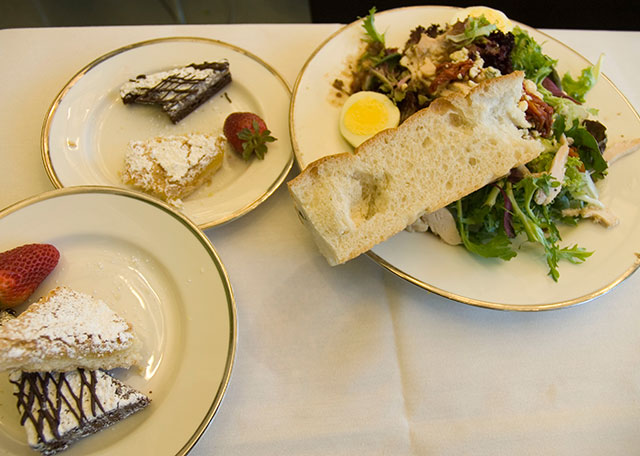 ** PLEASE SEE THE FIRST SET OF PHOTOS AND THE TEXT OF A FLYER AT:

Alumni Luncheon Interruption to Demand Fair Wages for UCSC Workers
http://www.indybay.org/newsitems/2008/04/26/18495256.php
Add Your Comments
LATEST COMMENTS ABOUT THIS ARTICLE
Listed below are the latest comments about this post.
These comments are submitted anonymously by website visitors.