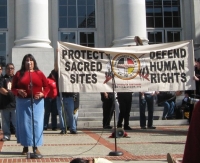 Hundreds to Join in Second ‘Longest Walk’ from Alcatraz to D.C.
This Year Marks 30th Anniversary of the First Longest Walk in 1978

On February 11, 2008, more than two hundred participants of the Longest Walk 2 embarked on a five-month journey on foot from San Francisco. They plan on arriving arriving in Washington, D.C. on July 11, 2008. Native American tribal leaders, religious groups, environmentalists, teachers, students, and people from throughout the world are joining the walk with its "peaceful and spiritual call to action to protect Mother Earth and defend human rights."

A rally and press conference was held at the University of California Berkeley, to commence the Longest Walk 2.

Photos at the Tree Sit

The mission of the walk is to raise awareness about the planetary crisis by walking to reconnect with the land, increase respect for cultural diversity, stimulate dialogue about connections between nature and culture, and protect sacred lands and diverse spiritual practices.

2008 marks the 30th anniversary of the original Longest Walk of 1978 that resulted in historic changes for Native America. "In 1978, our communities faced many hardships such as non-existing religious rights and criminalization of our people who fought for cultural survival. This is why the Longest Walk was necessary," states Jimbo Simmons of the International Indian Treaty Council. "As Indigenous Peoples in the United States our environment and our cultural survival are directly correlated and are still imperiled today. This is why we must walk once again."

Thousands converged on the Nation's Capitol in 1978 to join efforts that defeated 11 pieces of legislation in Congress that would have abrogated Native American treaties. In addition to this success, the American Indian Religious Freedom Act (AIRFA) of 1978 was also passed.

Veterans of the original walk and younger generations alike have been clear that the 2008 Longest Walk is more than a commemoration. Open to people of all nations and cultures, the Longest Walk 2 is being organized by original walkers as well as the next generation of Native American activists. Walkers will be documenting issues impacting the communities they visit.