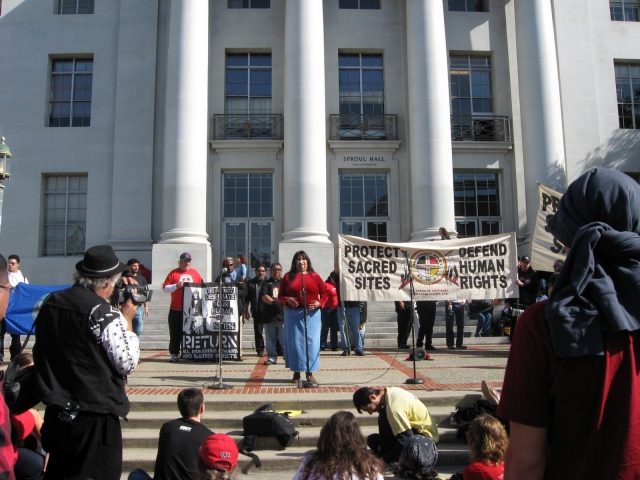 BERKELEY, Calif. -- On February 11, 2008, Indigenous Nations from around the country held a rally and press conference at the University of California Berkeley, to commence the Longest Walk 2 – a trans-continental walk for environmental protection and Native American rights. Participants of the Longest Walk 2 are embarking on a five- month journey on foot from San Francisco and will arrive in Washington, D.C. on July 11, 2008.

More than 1,000 Native American dignitaries, religious leaders, environmental, and union groups began the walk at a Monday sunrise ceremony at Alcatraz Island, which has become a symbol for Native American Resistance. The events continued with a peaceful rally and press conference at the University of California.

“Longest Walk 2 embraces the struggle in solidarity with California Natives fighting the sudden and secretive elimination of UC Berkeley’s Hearst Museum’s unit on Native American Graves Protection and Repatriation Act (NAGPRA).” Said Jimbo Simmons, National Coordinator of The Longest Walk 2 and Native American NAGPRA Coalition member. “We are protesting the university’s possession of more than 12,000 ancestral remains. Not only is UC Berkeley refusing to comply with federal law, they are turning complete control of our missing Indian ancestors and sacred objects to radical anti-repatriation scientists.”

Native Americans and social justice allies demanded a reversal to the administrative exclusion of Native Americans from any decision making process. Native people also demanded that the university immediately comply with all federal and state laws.

“You are literally walking in my ancestors foot steps,” said Cheyenne Gould, a 17-year-old Muwekwa Ohlone youth. “My ancestors walked all through here and now they are in boxes at this university, I feel appreciative of the Longest Walk 2 because we need more people to speak out. We also need more people to listen to us so that the University will give back our remains so we can have proper burials.”

A march that grew to more than 400 people began at UC Berkeley’s Oak Grove. Activists have been blocking plans by University officials to clear cut old growth trees and demolish the area that has been identified as an Ohlone burial site by UC Berkeley’s own archeology department.

Marchers proceeded to Sproul Plaza on the UC Berkeley campus with a call to attention and for support for a California State Senate hearing on February 26 to investigate the ongoing rights violations committed by the university against Native Americans. Marchers also voiced support for mediation between Indian Nations and the UCB system.

“When it comes to Native Americans, why is that we have no guaranteed protection of our religious freedoms and our ancestors’ final sacred resting places?” said Morning Star Gali, Achumawi Band of the Pit River Nation and member of the Native American NAGPRA Coalition. “Universities, such as UC Berkeley and San Francisco State University, and developers continue to violate federal laws and desecrate our burial sites and sacred places. Both UC Berkeley and SF State are holding over 12,000 of our ancestors and cultural objects hostage.”

“This is a direct attack on our people.” said Joey Silvas, Wailaki tribal member. “We will be back until our people are returned, everyone of them. I would like you to take these messages from Alcatraz, Glen Cove, UC Berkeley, and DQ University. The whole world needs to know. Not only in Indian Country.”

The Longest Walk of 2008 is stopping in communities all across Turtle Island. Longest Walk participants will listen to Native peoples concerns, document and deliver them to US officials in DC.

The 2008 walk will mark the 30th anniversary of the original Longest Walk of 1978 that resulted in historic changes for Native America.
In July of 1978, thousands converged on the Nations capitol to immobilize 11 pieces of legislation in Congress that would have abrogated Native American Treaties.

“It’s sad to think that there are more dead Indians here at this University than live ones. That needs to change,” said Dennis Banks, co-founder of the American Indian Movement. “They have studied us long enough. They’ve trampled upon our history, they have disturbed the journey of our spirits.”

“Americas if you were our friend, we wouldn’t have to walk across this country to say how we’ve been hurt!”
###


Note to editors: High-resolution photos available upon request.
http://www.longestwalk.org
Add Your Comments
Support Independent Media
We are 100% volunteer and depend on your participation to sustain our efforts!