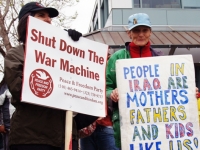 On Saturday, April 7th, the anti-war movement returned to the Oakland docks. Four years after the Oakland police attack against an anti-war demonstration at the port, protesters decried the lack of funding for schools and social services in Oakland and Alameda County. Report Back ||

Supplies for the military ship from the Port of Oakland every day. Organizers say, "The Port and its maritime tenants are war profiteers and pay not one cent for Oakland Schools or Alameda County social services. Yet the Port does $33 billion in business a year." The protest also demanded that the troops be brought back home and given the healthcare that they need. A protest at the Port is also planned for May 19th.