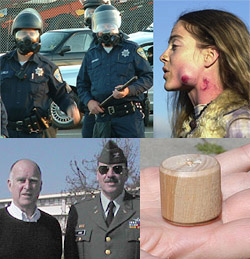 4/7: Anti-War demonstrators arrived around 5AM at the port of Oakland to picket two firms profiteering off the war in Iraq. By 7AM, the picket line was successful in provoking the ILWU into sending many of its workers home for the day. After approximately 30 minutes, the Oakland Police Department moved in to disperse the demonstrators, using concussion grenades , wooden bullets, and beanbags full of metal shot. Scores of people, including six onlooking workers, suffered injuries and Jack Heyman (Business Agent, ILWU Local 10) was arrested with over 35 other protesters and port workers.

Police violence quickly forced protesters back to the West Oakland BART station and there was then a spirited march downtown to the Oakland Federal Building. A press conference was held at 2:30 in front of City Hall to address issues of police violence towards workers and protesters.

Strong anti-war sentiments by longshoremen combined with disgust at OPD violence kept large portions of the Oakland docks shut down for most of the day, but as would be expected Mayor Jerry Brown defended the police brutalization of protesters.