Add an Event
Newswire
Calendar
Features
Home
Donate
From the Open-Publishing Calendar
From the Open-Publishing Newswire
Indybay Feature
Publish to Newswire
Add an Event
Related Categories: East Bay | Anti-War
Money for Schools, Not Wars! Protest at the Oakland Docks
by ~Bradley (bradley [at] riseup.net)
Saturday Apr 7th, 2007 6:14 PM
On April 7th, 2007, an antiwar rally was held at the Oakland docks to mark the fourth anniversary of the Oakland police attack on protesters, longshoremen and journalists. 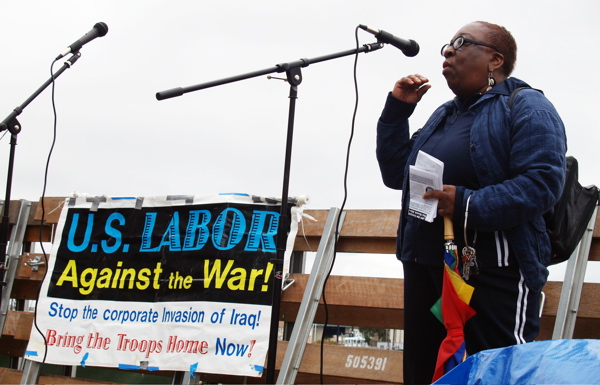 Organizers of the event outlined the following key points:

* Stop war shipments.
* Port money for schools & social services.
* Bring the troops home now and give them the healthcare they need.
* Express solidarity with Tacoma protestors who are trying to stop war shipments.

Supplies for the military ship from the Port of Oakland every day. Organizers say, "The Port and its maritime tenants are war profiteers and pay not one cent for Oakland Schools or Alameda County social services. Yet the Port does $33 billion in business a year." 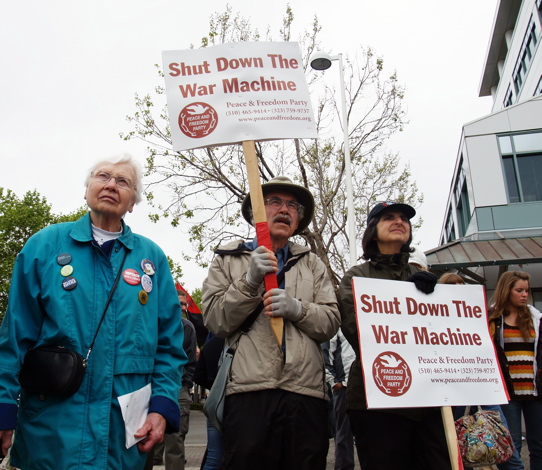 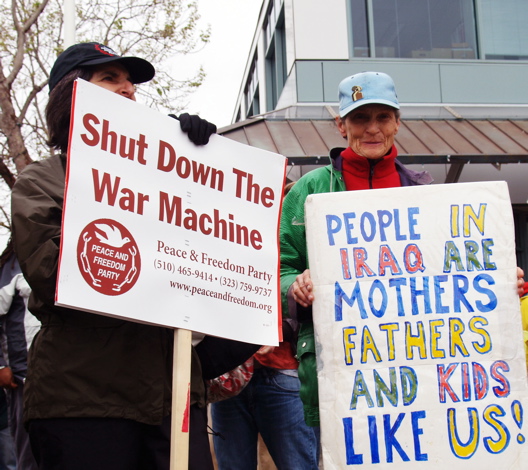 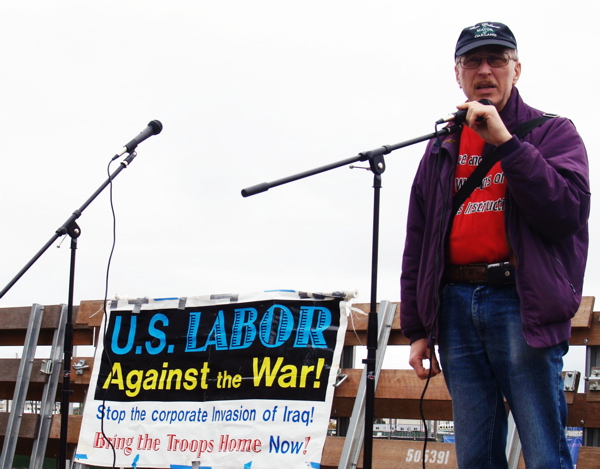 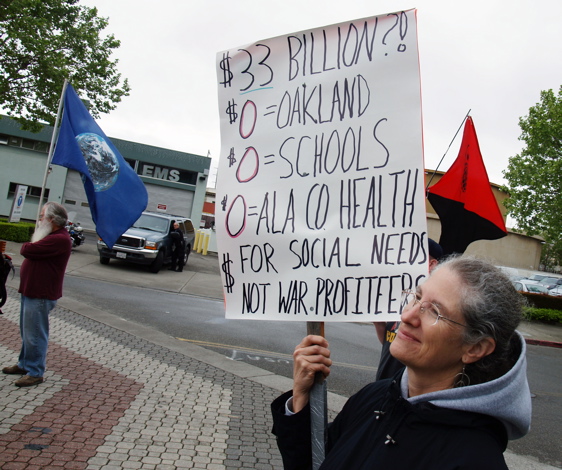 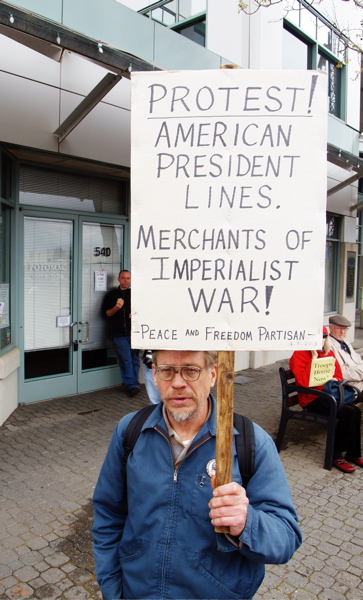 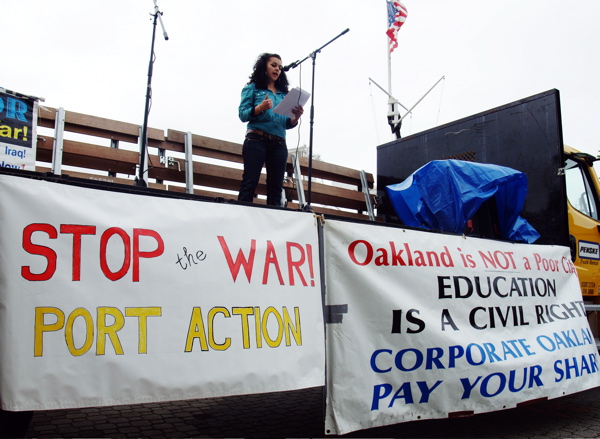 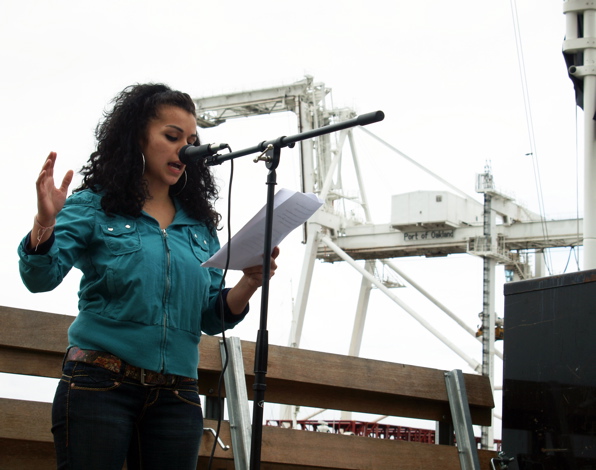 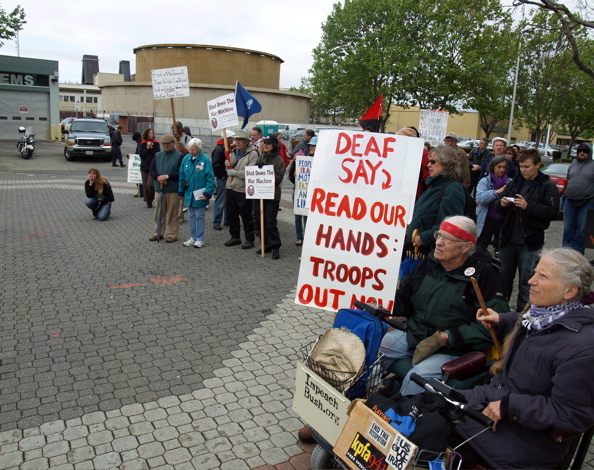 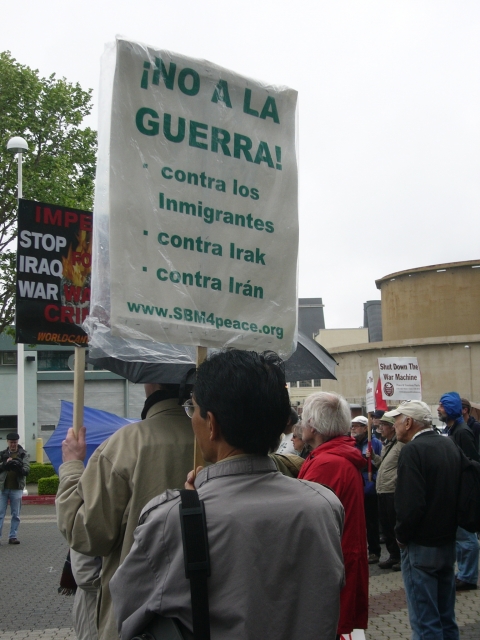 original image (1536x2048)
Here are a few photos of other speakers, which are added here rather than creating a separate article about the April 7th Return to Docks demonstration.
The morning was a bit rainy, which caused some signs to bend, but there was a decent turnout at this location. A picket protest is planned in May, which will occur at the gates of shipping lines which are sending supplies to the military in Iraq. This being Saturday, and not a work day, the demonstration was held next to the Port of Oakland offices.
§appended photo
by cp Saturday Apr 7th, 2007 11:34 PM 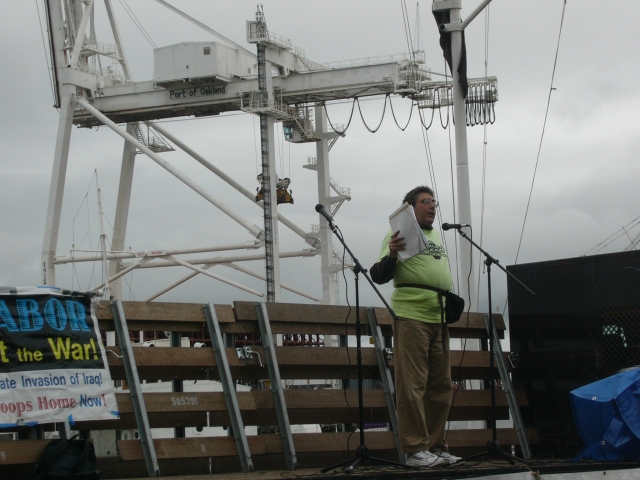 original image (2048x1536)
This demonstration occurred on the waterfront a couple blocks from the start of the docks, and next to the ferry where the Blue and Gold Fleet (who are busting a union) runs a line to San Francisco.
This is Bob Mandel, who was one of a number of Oakland teacher's union attendees. I had to ask, in order to clarify that he is not the KPFA He made a good speech and pointed out that the Port of Oakland uses Oakland city taxes, which is part of a zero sum budget with educational and other local expenses. The schools are currently locally funded but are under state rather than local school board control. He spoke about a large tax break for major skyscraper building downtown, where they pay nothing for local schools, yet the building management called local police to have them cited for passing out leaflets near the building, although they won in court.
He listed several interesting cases, such as a soldier with a sick son, who must remain in the army despite being injured in order to keep health insurance.
§appended photo
by cp Saturday Apr 7th, 2007 11:50 PM 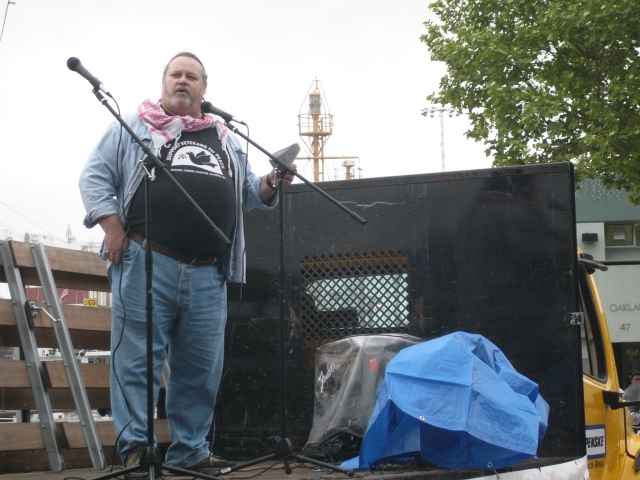 original image (2048x1536)
This member of veterans for Peace, from Olympia, Washington, described an illegal violent response to protesters at Tacoma docks who were speaking against loading of a Fort Lewis Stryker Brigade onto ships last month.
He suggested watching this youtube video which shows the police ordered by their commander to fire rubber bullets and CS gas as seated people singing 'give peace a chance'. Many of these demonstrators are Iraq veterans.
http://www.youtube.com/watch?v=9hIIuJK_Uh8 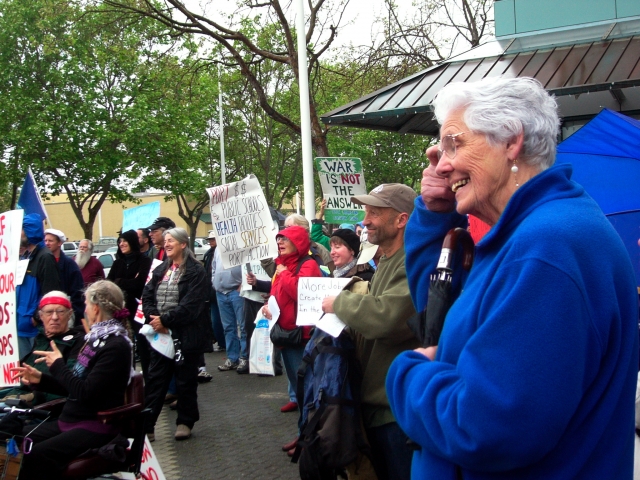 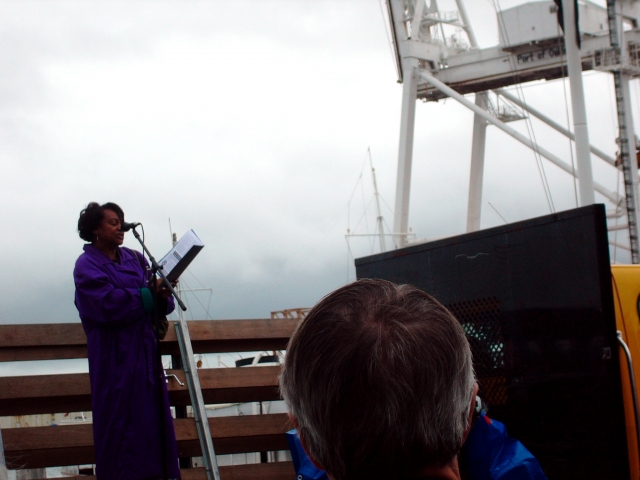 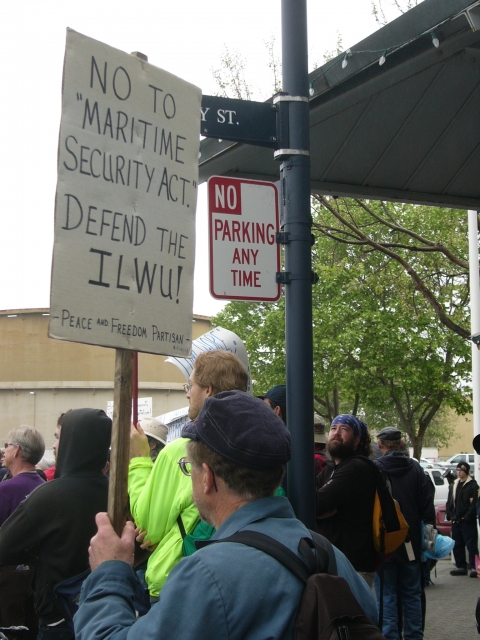 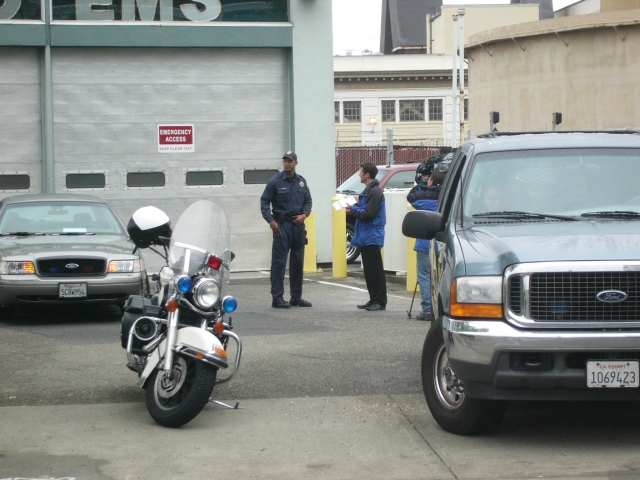