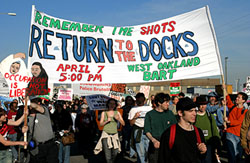 Remember the Shots! Return to the Docks!
April 7, 2004 Action

Wednesday April 7th, 2004 was the anniversary of the April 7, 2003 community picket shutdown of Iraq war profiteers APL and SSA docks at the Port of Oakland. Activists returned in opposition to the war and to last year's crackdown on dissent by the city of Oakland.
Photos: 1 | 2 | 3 | 4 | 5   Audio: 1 | 2
The protest was organized by: Direct Action to Stop the War (DASW) and People United for a Better Oakland(PUEBLO).

On April 7, 2003 the Oakland Police Dept. opened fire with "less-lethal" weapons on a peaceful anti-war picket line in the Port of Oakland protesting the war profiteers shipping military cargo. Dozens of demonstrators and 9 longshore workers, members of ILWU Local 10, were seriously injured and 25 were also arrested.
April 3rd Update: The UN has released a 169 page report which mentions the violence committed last year by the OPD at the docks. This report lists the port incident alongside many other cases regarding repression of dissent by police and military in such places as Indonesia, Burundi, China, Egypt, Pakistan, Gambia & New York. It also states that the use of less-than-lethal weapons is against international standards. Even though this report has been released, the 25 people arrested at this action are still facing criminal charges by the OPD. See also: Oakland Tribune article on this report.