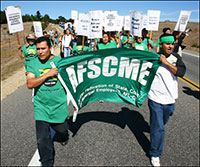 At noon on Wednesday, October 18, 2006, members of AFSCME 3299 and their supporters at UC Santa Cruz marched from the Bay Tree Plaza to the base of campus, where a roving picket line was held, followed by a rally. The workers have been engaged in a year-long struggle to receive wages similiar to those of neighboring colleges and universities where people can make up to 30% more for the same (or less) work. Over the summer, the California State Assembly passed legislation funding these wage increases, yet UC President Dynes has been holding the money hostage as a way of forcing union concessions over pension issues.

Wednesday's action, which, due to police blockage of the road, effectively shut down the base of campus for 30-40 minutes, was the first protest of the day at UCSC. Due to a visit from the UC Regents, a high-profile action a few hours later where police assaulted and pepper-sprayed students has taken most of the headlines. It's important to note, however, that these two actions were in solidarity with each other, as students and workers struggle over the same need to democratize the UC and fix the problems at UCSC before any possible expansion. Read More and View Photos || Students and Workers (Re)United for Justice!