Add an Event
Newswire
Calendar
Features
Home
Donate
From the Open-Publishing Calendar
From the Open-Publishing Newswire
Indybay Feature
Publish to Newswire
Add an Event
Related Categories: Santa Cruz Indymedia | Education & Student Activism | Labor & Workers
AFSCME and Friends March for Wage Parity, Justice
by josh sonnenfeld (sugarloaf [at] riseup.net)
Friday Oct 20th, 2006 4:59 PM
At noon on Wednesday, October 18, 2006, members of AFSCME 3299 and their supporters marched from the Bay Tree Plaza to the base of campus, where a roving picket line was held, followed by a rally. The workers have been engaged in a year-long struggle to receive wages similiar to those of neighboring colleges and universities where people can make up to 30% more for the same (or less) work. Over the summer, the California State Assembly passed legislation funding these wage increases, yet UC President Dynes has been holding the money hostage as a way of forcing union concessions over pension issues.

Wednesday's action, which, due to police blockage of the road, effectively shut down the base of campus for 30-40 minutes, was the first protest of the day at UCSC. Due to a visit from the UC Regents, a high-profile action a few hours later where police assaulted and pepper-sprayed students has taken most of the headlines. It's important to note, however, that these two actions were in solidarity with each other, as students and workers struggle over the same need to democratize the UC and fix the problems at UCSC before any possible expansion. 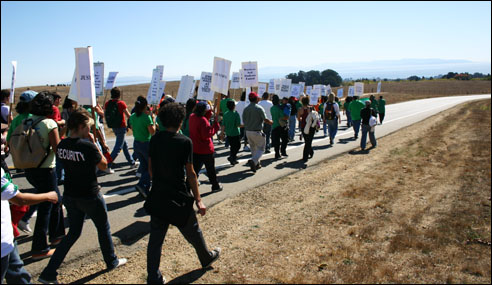 There are a few quick shots to make sure this action doesn't dissapear in all the media hype about the Regents protest. All photos are free and available for use by AFSCME 3299 and the Student and Worker Coalition for Justice. For reprinting, or larger sizes, please email sugarloaf [at] riseup.net - thanks!
http://www.afscme3299.org
§Yes on G!
by josh sonnenfeld Friday Oct 20th, 2006 4:59 PM 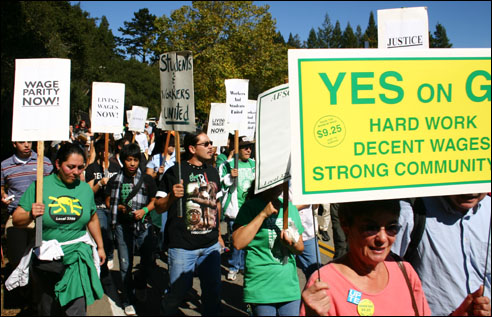 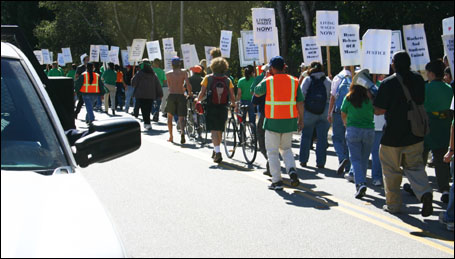 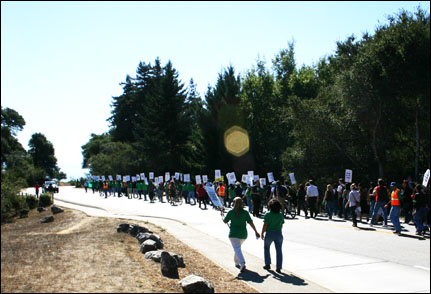 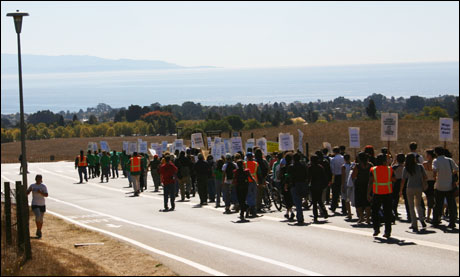 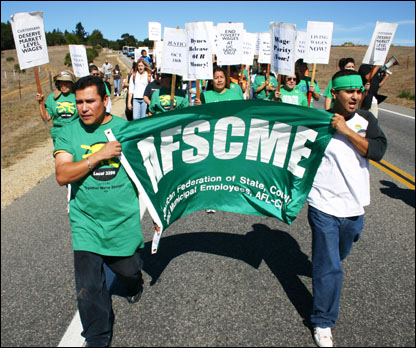 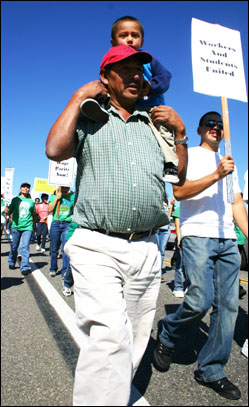 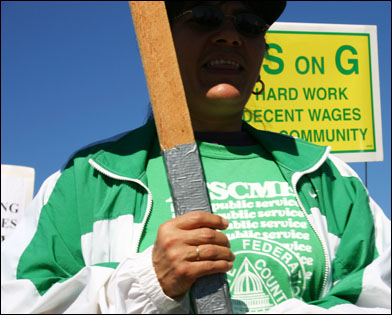 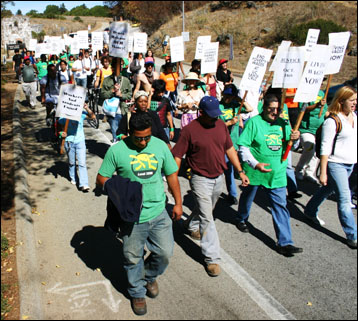 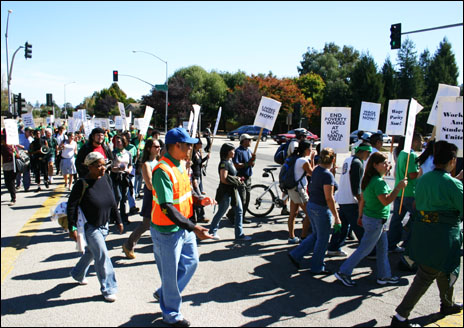 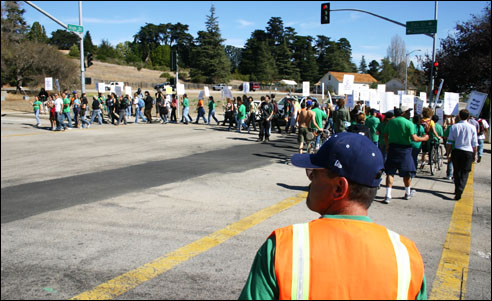 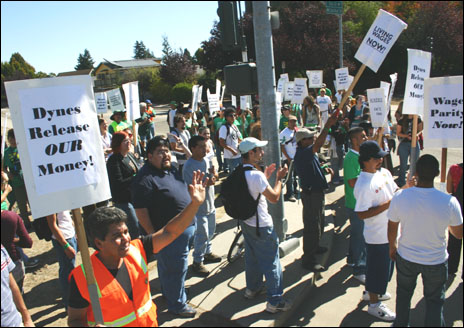 A UCSC Parking Services employee reroutes traffic on Bay Street. With High Street closed due to construction, no cars were around the base of campus to observe the rally.
§Solidarity
by josh sonnenfeld Friday Oct 20th, 2006 4:59 PM 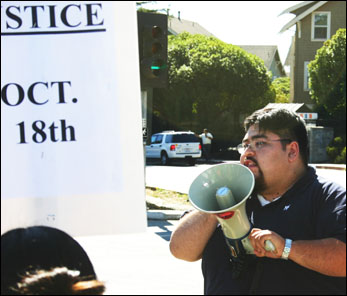 A rep from the Monterey Bay Central Labor Council shows his support for AFSCME.
§"We Need a Labor Party!"
by josh sonnenfeld Friday Oct 20th, 2006 4:59 PM 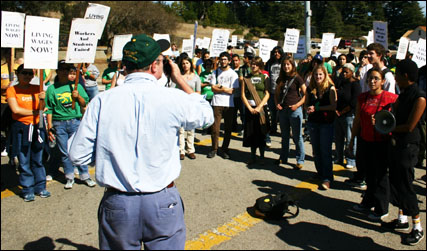 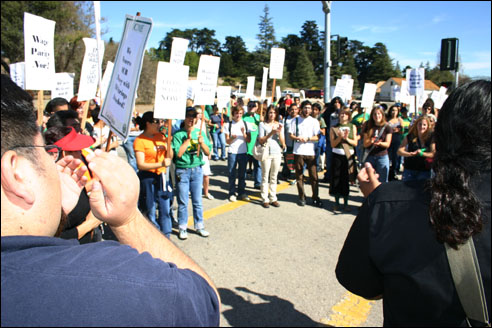 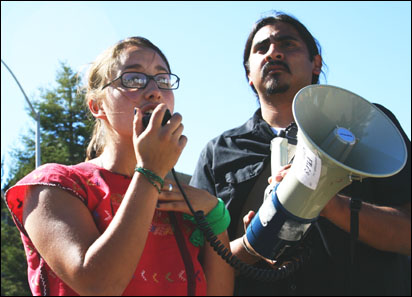 Maria from the Student and Worker Coalition for Justice and Julian from AFSCME.
§Univision
by josh sonnenfeld Friday Oct 20th, 2006 4:59 PM 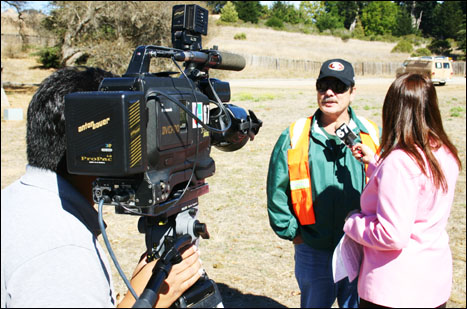 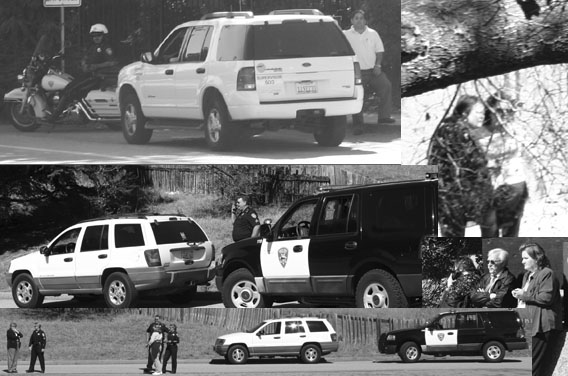 How many cops does it take to screw in a lightbulb?

Here you have your Metro employees, who have suddenly decided its their job to monitor marches, a motorcycle cop, a SCPD SUV, a unmarked SUV with two cops inside, and at least 4 administrators (including Labor Relations and Student Affairs).

Yes.. we see you behind those bushes...

Considering the city wants us to raise our taxes with Measure H, you'd think they'd avoid wasting our money with unneccessary monitoring of political activities...
Add Your Comments
LATEST COMMENTS ABOUT THIS ARTICLE
Listed below are the latest comments about this post.
These comments are submitted anonymously by website visitors.