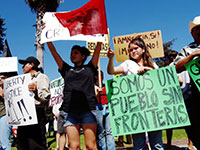 Immigration Raid Protest in Watsonville
Justice For All Migrants and Immigrants

On September 7th and 8th, the communities of Watsonville, Santa Cruz, and Hollister woke up to attacks (arrests & deportations) from the Immigration and Customs Enforcement Agency (ICE, formerly INS). The ICE told local media that they targeted undocumented people with prior warrants, but of the 107 arrested, only 19 had warrants for arrest, and up to 90 were immediately deported without an opportunity to see an immigration judge or receive any kind of legal advice. It was reported that the ICE told the victims that they were either police or school officials. Once in the house, they questioned all people living there about their immigration status. Children were left without their parents, husbands without their wives, and wives without their husbands. Read more

A protest against "Operation Return To Sender" took place in the Watsonville Plaza on September 24th. Cars honked in support as people lined Main Street holding signs calling for a world without borders, dignity for workers, black and brown unity and solidarity with immigrants. A circle was formed and people from Watsonville discussed how their community has been affected by immigrantion raids.