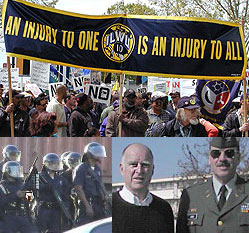 Citing Liability, Oakland City Attorney Puts a Lid on Public Hearing
The Oakland Police Department's violent attacks on non-violent demonstrators during a demonstration on 4/7, which received condemnation from Amnesty International, is being met with resistance. On 4/26 a union-led rally was held against the brutality suffered by ILWU members and activists, along with an Injured Protester Feeder March.
Photos: 1 | 2 | 3 | 4 | 5 | 6 | 7 | Audio: 1 | Video: 1 | 2 | 3 | 4

In an attempt to highlight the daily violence inflicted upon low-income and mostly people of color communities, a community forum was organized for 4/28 to discuss responses and make policy proposals to the city's public safety committee, which met on Apr 29. Forum report | Video from 4/29 Public Safety Committee Meeting