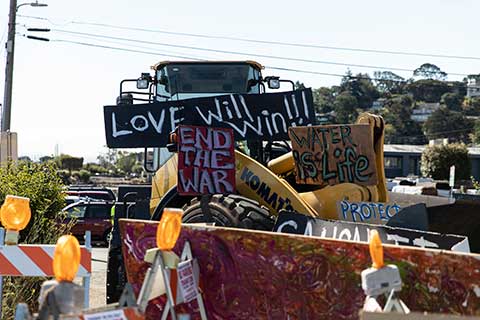 On June 29, the city of Sausalito cracked down with force on an encampment near Dunphy Park. Occupants joined by housing activists formed a line of resistance and shouted their demand to see a warrant. It was a tense stand-off that followed months of contention and a legal battle. Resistors fought bravely, but were told their new home would have to be an area that is muddy and close to a U.S. Army Corps of Engineers’ debris yard, where boats are taken from the water for destruction.

By mid-morning on the 29th, crews raised cyclone fencing around the site. Then, police moved in and removed the residents forcefully; some had to be carried out. Occupants said they had created a community near Dunphy Park and they are emboldened to continue their battle for rights of the unhoused. “This isn’t the end no matter what happens,” said one protester.