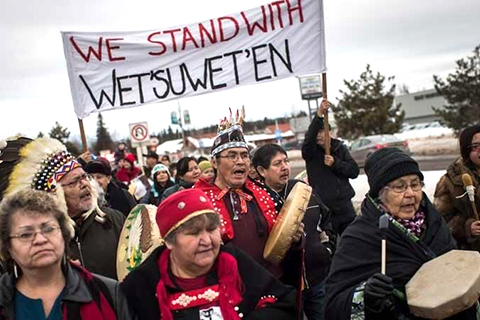 Facebook suspended hundreds of individual accounts linked to Indigenous, environmental, and social justice organizations because they were co-hosts of an online Facebook event last May targeting KKR & Co. Inc., the new majority funder of the Coastal GasLink pipeline. Facebook notified those who were unable to post that the suspension would last for three days and was a result of “copyright infringement.” Facebook has yet to reinstate dozens of accounts, and groups say Facebook has not given a satisfactory explanation.

Facebook blocked the accounts days before another online event on September 21 targeting KKR’s involvement. The pipeline is set to cut through sovereign Wet’suwet’en land, defiantly ignoring assertions from hereditary chiefs of their rights, title, and consent for the project. The project would lock in decades of increased fracked gas, impacting the climate, air, water, and pose risks to Indigenous camps built along the route.