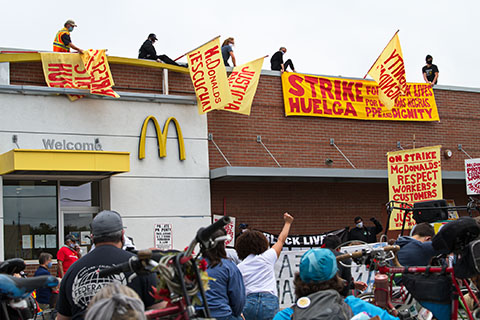 Protesters marched up Telegraph Avenue and into the parking lot at the McDonald's at Telegraph and 45th Street. They proceeded to block off the drive through with big signs that read that the restaurant was closed due to Covid health hazards. Demonstrators also kneeled for eight minutes and forty-six seconds in remembrance of George Floyd, murdered by police.

The combined rooftop and ground demonstration was emphasizing not only the Black Lives Matter movement but demands by McDonald's workers for respect, dignity and, specifically, for adequate on the job protective equipment. The action was part of an evolving movement reaffirming rights and respect for working people and demanding that genuine racial equality be finally achieved.