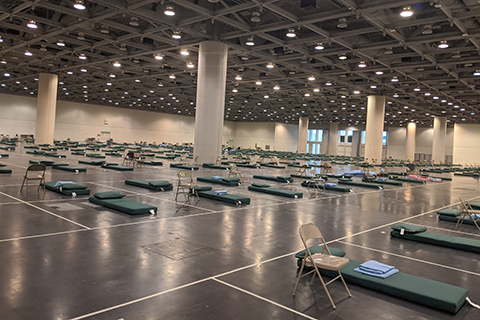 UPDATE, April 7: Less than 24 hours after the story broke, San Francisco announced a change for addressing the pandemic in homeless shelters. The updated plan is to thin vulnerable people from shelters directly into hotel rooms. Read More

While hundreds of advocates have been desperately contacting Mayor London Breed imploring her to place homeless people in hotel rooms and vacant units, it seems she has her own plan for addressing poverty during the pandemic: opening indoor camps to further concentrate vulnerable people. The Moscone Center in downtown San Francisco opened its doors on Thursday and already has dozens of people sleeping inside it.

But these beds are not available to anyone currently sleeping outside. Instead, homeless San Franciscans will be moved out of smaller local shelters and into these massive congregate shelters, where hundreds of people, the majority of whom already have disabilities or chronic illnesses, will sleep on mats on the floor exactly six feet from each other.

Right now there are 390 mats in the Moscone Center that they plan to fill with homeless people. An inside source who asked to remain anonymous reported that there are currently no hand-washing stations, bathrooms facilities are shared and limited, staff don’t have Narcan and there are no sharps containers. Folks coming in are not allowed to bring any property with them and are told they must leave all their belongings at their shelters. Mats on the floor are sectioned off with masking tape.