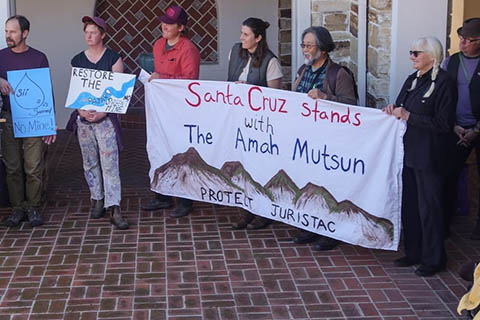 On February 11, the Santa Cruz City Council unanimously passed a resolution supporting the efforts of the Amah Mutsun Tribal Band to preserve Juristac as open space in perpetuity and to regain access to their cultural and spiritual sites at Juristac. The Council action was in response to the proposal by the Debt Acquisition Company of America to develop on the sacred territories of the Amah Mutsun community. The proposed Sargent Quarry Project seeks to impact 320 acres of this land by developing a 14-acre processing plant, 200-foot open pit quarry site, a 1.6 mile long conveyor belt, and a 30 foot wide access road.

Juristac is a territory that covers the southern hills of the Santa Cruz Mountains, above the Pajaro and San Benito Rivers. This territory has been a spiritual ground where the Amah Mutsun people gather to heal as a community and to celebrate sacred ceremonies.

Valentin Lopez, Chairman of the Amah Mutsun Tribal Band, stated that the resolution, "sends a strong message to the Santa Clara County supervisors and planners that communities are standing up — not just Santa Cruz and Morgan Hill, but other communities to come, and saying the destruction of indigenous people must stop. It's time to help them restore their cultures, their spirituality and their environment and that’s what we are asking people to do in our campaign to protect Juristac."