Add an Event
Newswire
Calendar
Features
Home
Donate
From the Open-Publishing Calendar
From the Open-Publishing Newswire
Indybay Feature
Publish to Newswire
Add an Event
Related Categories: California | Santa Cruz Indymedia | South Bay | Environment & Forest Defense | Government & Elections | Racial Justice
Santa Cruz City Council Introduces Resolution to Support Amah Mutsun Tribe in Protecting Juristac
by Santa Cruz News
Friday Feb 7th, 2020 11:32 AM
A resolution "recognizing and supporting" the Amah Mutsun Tribal Band in protecting the sacred lands of Juristac from "developments by public or private entities" has been placed on the consent agenda for consideration by the Santa Cruz City Council at their next meeting on Tuesday, February 11. The resolution also instructs the Mayor to send a letter to Santa Clara County. Juristac, which is located in the Sargent Hills area of the Santa Cruz Mountains, is facing the threat of major development by a mining company. The resolution was submitted by Mayor Justin Cummings, Councilmember Drew Glover, and Councilmember Chris Krohn, who write in the meeting agenda report, "It is evident that the Amah-Mutsun Tribal Band existed here before Spanish contact and has continued to exist through the Mission era, the Mexican era, and to the present American era. Therefore, we believe the City of Santa Cruz should recognize, acknowledge, commend, and fully support the Amah-Mutsun Tribal Band in their commitment opposing the Sargent Quarry Project on the sacred lands of Juristac." Photo: Aerial view of Juristac (Credit: Protect Juristac). 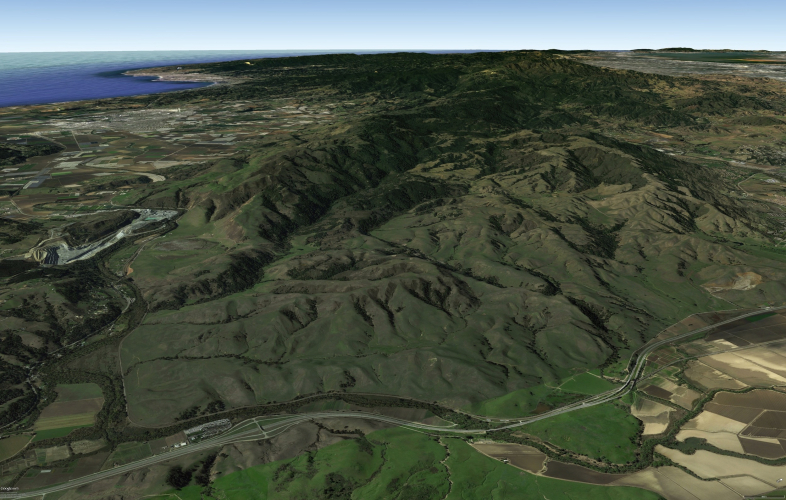 "In 2017, the City of Santa Cruz passed a resolution to recognize and support the Amah-Mutsun Ohlone Tribe in their stand to obtain Federal Tribal recognition. The City of Santa Cruz is also recognized as a partner of the Amah Mutsun Tribal Land Trust, which seeks to provide organizational and partnership support to the Tribal Council in their re-engagement of land conservation and stewardship within the traditional Tribal territory of the Amah Mutsun community.

"Juristac is a territory that covers the southern hills of the Santa Cruz Mountains, above the Pajaro and San Benito Rivers. This territory has been a spiritual ground where the Amah Mutsun people gather to heal as a community and to celebrate sacred ceremonies. The developer, the Debt Acquisition Company of America (DACA), has introduced a proposal to develop on the sacred territories of the Amah Mutsun community. The proposed Sargent Quarry Project seeks to impact 320 acres of this land by developing a 14-acre processing plant, 200-foot open pit quarry site, a 1.6 mile long conveyor belt, and a 30 foot wide access road."

WHEREAS, on May 9, 2017, the City of Santa Cruz adopted a resolution recognizing the Amah Mutsun Tribal Band as a historic and continuous tribe of the region with ancestral ties to Mission Santa Cruz; and

WHEREAS, Mutsun descendants, today represented by the Amah Mutsun Tribal Band, are working diligently to restore their indigenous practices, regain stewardship of their lands, and heal from historical trauma; and

WHEREAS, the Debt Acquisition Company of America, doing business as Sargent Ranch Management Company, has applied to the County of Santa Clara for a conditional use permit for a proposed sand and gravel mining operation with aggregate processing facilities on approximately 320 acres of Sargent Ranch, an area known as Juristac to the Amah Mutsun; and

WHEREAS, Juristac is the location of numerous ceremonial and sacred sites, comprising a landscape of immense historical, cultural and spiritual importance to the Amah Mutsun Tribal Band; and

WHEREAS, the Amah Mutsun maintain that the proposed mining pits, overburden piles, roads, and processing facilities would irreparably harm Mutsun cultural resources, landscape features, and the spiritual integrity of Juristac; and

WHEREAS, the Tribal Council of the Amah Mutsun Tribal Band has taken a unanimous stand in opposition to the Sargent Quarry Project and is seeking the support of surrounding communities in efforts to protect their sacred grounds; and

WHEREAS, on Jan. 15, 2020, the City of Morgan Hill unanimously passed a resolution in support of preserving the entirety of Juristac as open space; and

WHEREAS, it is a goal of the City of Santa Cruz to protect, enhance and sustain native and natural plant and animal communities and habitats [NRC2, 2030 General Plan] and to protect, enhance, and maintain movement corridors and buffers [NRC2.3]; and

WHEREAS, the City of Santa Cruz seeks to lead the community in the conservation and stewardship of natural resources [NRC3] and coordinate with other public entities in assuring public access to unrestricted open space lands [PR3.2]; and

WHEREAS, on October 25, 2011 the City of Santa Cruz passed a resolution affirming support for the United Nations Declaration on the Rights of Indigenous Peoples (UNDRIP); and

WHEREAS, Article 12 of UNDRIP states, “Indigenous peoples have the right to manifest, practice, develop and teach their spiritual and religious traditions, customs and ceremonies; the right to maintain, protect, and have access in privacy to their religious and cultural sites;” and

WHEREAS, UNDRIP establishes a standard of “free, prior and informed consent” in regard to actions and policies that may affect the lands, territories, and resources of indigenous peoples [Article 19]; and

WHEREAS, it is the policy of the City of Santa Cruz, as outlined in the 2030 General Plan, to encourage and facilitate the protection and preservation of traditional cultural properties [HA1.7];

NOW, THEREFORE, BE IT RESOLVED that the City Council of the City of Santa Cruz supports the efforts of the Amah Mutsun Tribal Band to preserve Sargent Ranch/Juristac as open space in perpetuity and to regain access to their cultural and spiritual sites at Juristac;

BE IT FURTHER RESOLVED that the City Council of the City of Santa Cruz urges the County of Santa Clara to deny approval of permits for the proposed Sargent Quarry Project. 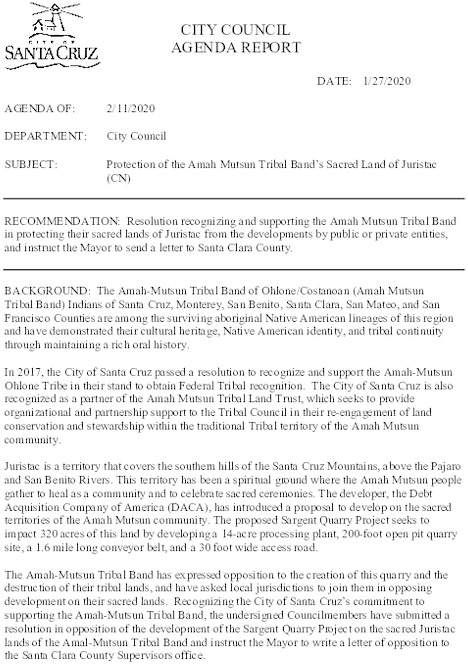 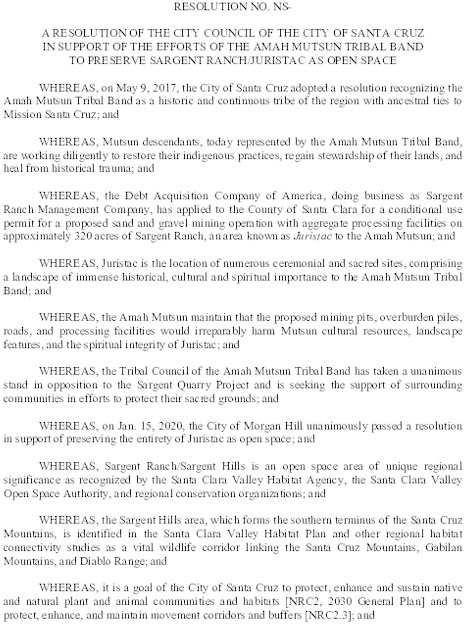 Download PDF (54.3KB)
Add Your Comments
LATEST COMMENTS ABOUT THIS ARTICLE
Listed below are the latest comments about this post.
These comments are submitted anonymously by website visitors.