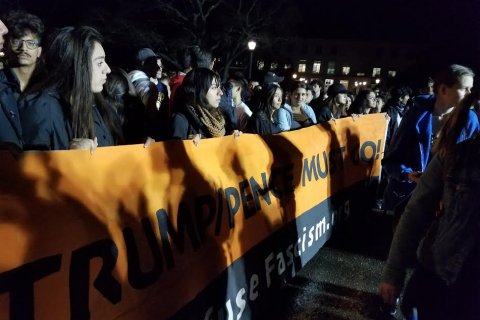 Chanting "Trump Pence Out Now" and “Berkeley is a sanctuary, no Coulter, no ICE," over a thousand students at UC Berkeley protested at an appearance by right-winger Ann Coulter who spoke to about 350 conservative students on November 20. They formed a mass demonstration at the front door and blocked the back doors to Wheeler Auditorium.

Inside the building when Coulter started talking about Trump’s border wall, a student stood up in the audience and called out: “You want to make America white again!” The demonstrator was pulled out of the auditorium by security, yelling along the way, “You are a fucking racist Ann, you are a fucking Nazi.” The demonstrating student was arrested and held overnight in jail. Six other protesters arrested at the demonstration were quickly released.