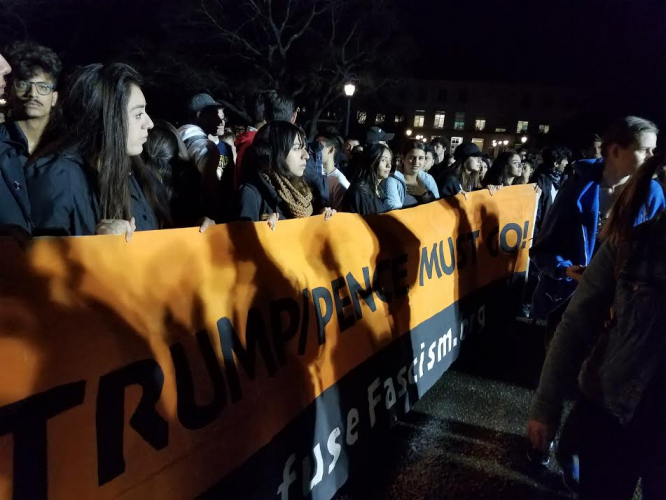 original image (951x713)
Chanting "Trump Pence Out Now" and “Berkeley is a sanctuary, no Coulter, no ICE," over a thousand students at UC Berkeley protested at an appearance by right winger Ann Coulter who spoke to about 350 conservative students. They formed a mass demonstration at the front door and blocked the back doors to Wheeler Auditorium.

Inside the building when Coulter started talking about Trump’s border wall, a student stood up in the audience and called out: “You want to make America white again!” The demonstrator was pulled out of the auditorium by security, yelling along the way “You are a fucking racist Ann, you are a fucking Nazi.” She was arrested and held overnight in jail. Six other protesters arrested at the mass demo were quickly released.

“Coulter came to UC Berkeley to promote the myths of ‘white genocide’ and spread anti-immigrant terror,” said Atlas Winfrey of Refuse Fascism, a group that contributed to organizing the protest. “This assault on immigrants by the Trump/Pence regime is the linchpin and battering ram of a broader fascist agenda. Coulter is part of a fascist movement pushing Trump to move further and faster.”

Protesters, commenting, said they are encouraged by the action and want to see this kind of mass protest spread in order to stop the Trump/Pence catastrophe.