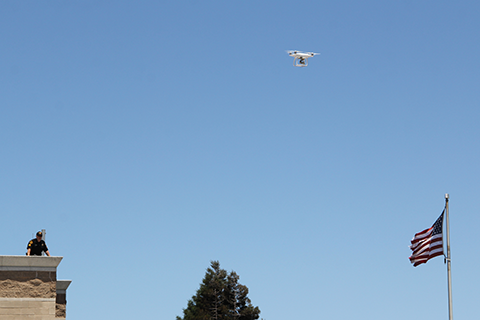 Records obtained by the Electronic Frontier Foundation and the Center for Human Rights and Privacy reveal that the Alameda County Sheriff’s Office had drones on the scene for many high-profile protests in Berkeley and on the University of California Berkeley campus throughout 2017, at the request of the Berkeley and UC police departments. The Contra Costa County Sheriff deployed drones over immigrant rights rallies outside the West County Detention Facility in Richmond, which houses detainees for ICE.

Alameda County Sheriff’s mission logs show an exclusive focus on protesters associated with left-wing, anti-racist, and anti-fascist causes, or other groups opposing the Trump presidency. For instance, By Any Means Necessary (BAMN) and Antifa are named. There is little mention of the alt-right, nationalist, or pro-Trump groups also involved in the altercations.

Berkeley and Oakland passed measures to ensure that law enforcement doesn’t acquire surveillance technology without a public process, so if they do, policies can be established limiting how police use drones. But, these laws do not apply to the Alameda County Sheriff’s Office and neither the city of Richmond nor Contra Costa County have passed similar restrictions. In Silicon Valley, Santa Clara County adopted such a law, which does apply to that county’s sheriff.