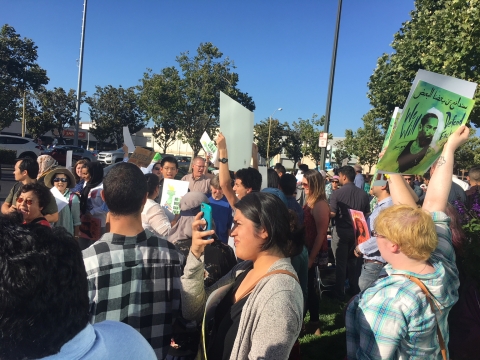 In a 5-to-4 decision, the Supreme Court’s conservative justices wrote that even considering all of President Trump’s anti-Muslim statements about the travel ban, the order should be upheld. The court held that the challengers failed to show that the ban violates the U.S. Constitution’s First Amendment prohibition on the government favoring one religion over another. It also held that the challengers failed to show the ban violates U.S. immigration law.

Reaction was swift in the San Francisco Bay area; emergency protests were held in San Francisco, San José, and other cities across the U.S. within hours of the announcement. Demonstrators said they were angry that the Supreme Court decision supports Trump's white nationalist agenda.

In San José, the four corners of the busy intersection at Winchester and Stevens Creek boulevards were filled with demonstrators protesting the decision at 5pm. A rally leader from the Muslim Students Association-West shouted chants into a bullhorn and speakers addressed a roaring crowd of hundreds.