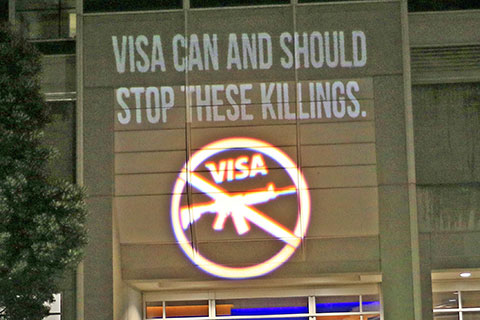 On March 8, protesters gathered in front of Visa headquarters in Foster City. They called on the credit card company to block sales of assault weapons. Shortly after they delivered 150,000 signatures on a petition to company representatives, VISA issued a statement to the press saying “We do not believe Visa should be in the position of setting restrictions on the sale of lawful goods and services."

One week later the demonstrators returned. Saying that VISA's response rings hollow because the company already blocks the sales of bitcoin and other cryptocurrencies, this time they brought projection equipment to broadcast their message in large lights on the building.

Demonstrators projected the death toll of the worst mass shootings of this decade on the building and held a candlelight vigil on the rainy night in remembrance of the lives lost because weapons of mass murder are too easy to buy. One protestor stated, “We are here to keep pushing Visa to prioritize lives over profits, and to demand they stop processing sales of assault weapons."