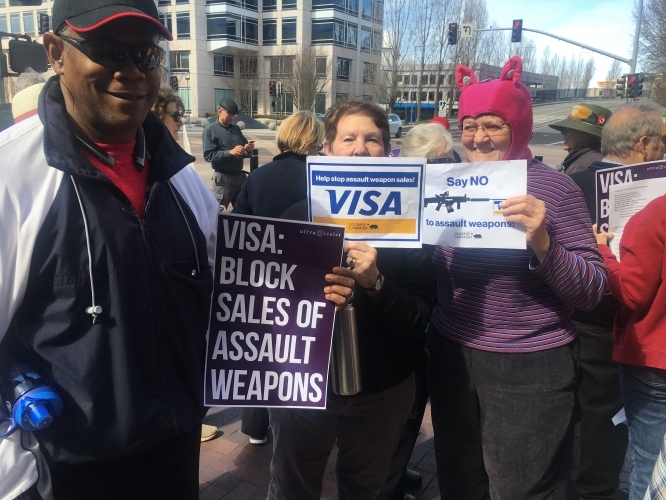 original image (4032x3024)
While Congress lines its pockets with money from the NRA, women and children are being gunned down, and companies like Visa must do their part to stop the violence, said protesters in front Visa headquarters in Foster City. They lamented that Congress has failed to act, but said that companies around the United States have taken action after Parkland and other mass-shootings, some companies severing ties with the National Rifle Association, others restricting sale of weapons in their stores to individuals 21 and older, and some even going so far as to stop selling assault weapons entirely. They said that Visa must follow suit.

On March 8, demonstrators delivered a petition of 150,000 signatures collected with the organizing help of UltraViolet, Courage Campaign and DailyKos. Their demand of Visa: stop processing sales of assault weapons.

Members of the group of about 25 protesters said they hoped for an immediate answer from Visa and were there to push Visa to prioritize lives over profits. 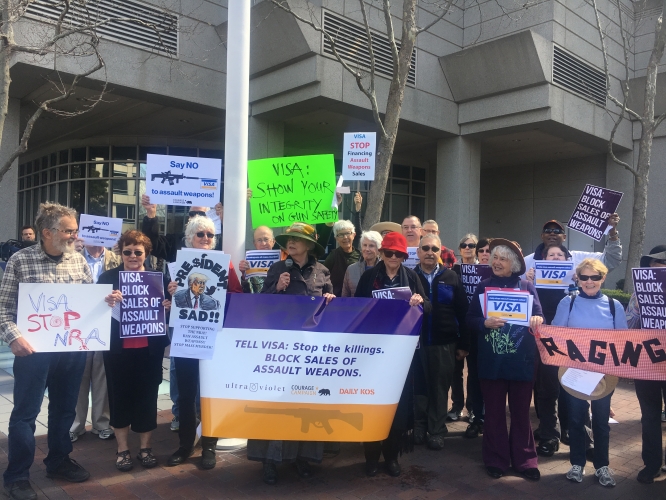 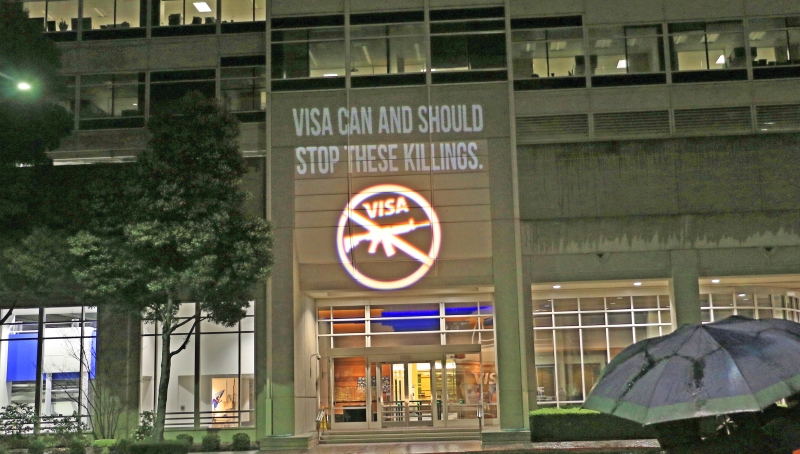 original image (4763x2705)
Protesters projected the death toll of the worst mass shootings of this decade on Visa's headquarter building and held a candlelight vigil in remembrance of the lives lost because weapons of mass murder are too easy to buy. They said they want Visa to block credit card sales of deadly assault weapons. Photos from UltraViolet.

On March 8, protesters leaned on Visa to block sales of assault weapons. Shortly after they delivered 150,000 signatures on a petition to the company headquarters in Foster City, Visa issued a statement to the press saying “We do not believe Visa should be in the position of setting restrictions on the sale of lawful goods and services."

One week later the demonstrators returned. Saying that Visa's response rings hollow because the company already blocks the sales of bitcoin and other cryptocurrencies, this time they brought projection equipment to broadcast their message writ large. They projected the death toll of the worst mass shootings of this decade on the building headquartered in Foster City. They held a candlelight vigil on the rainy night in remembrance of the lives lost because weapons of mass murder are too easy to buy.

Despite the inclement weather, members of the Raging Grannies lead mournful singing and chanting. One of the Grannies, an octogenarian, said, "We are here to keep pushing Visa to prioritize lives over profits, and to demand they stop processing sales of assault weapons." 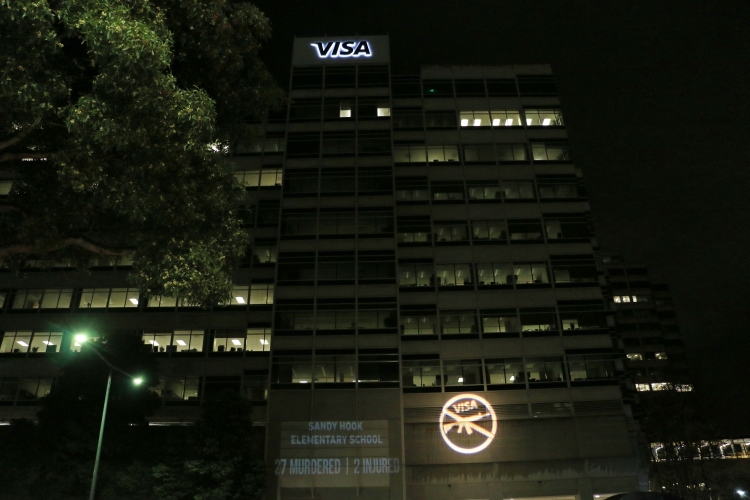 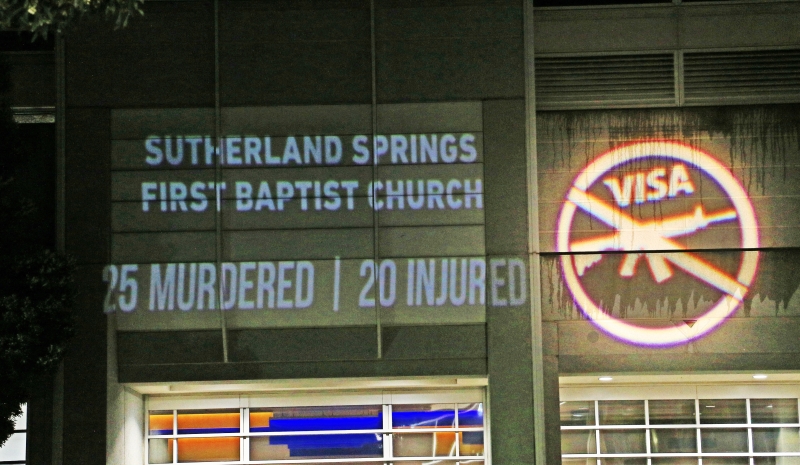 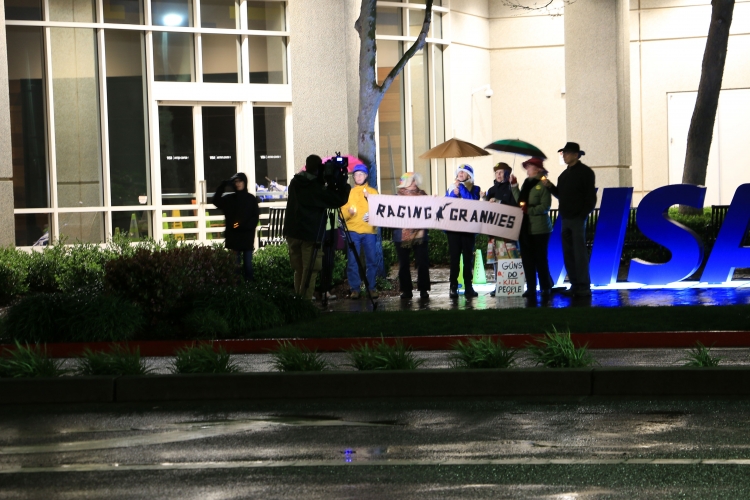 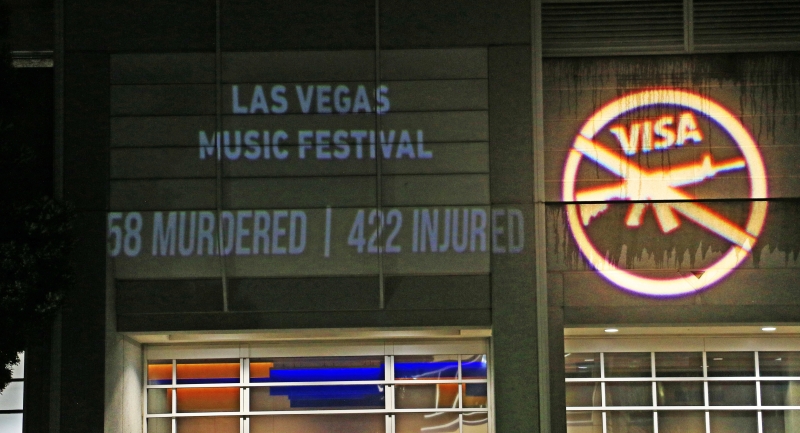 original image (4935x2675)
https://weareultraviolet.org
Add Your Comments
LATEST COMMENTS ABOUT THIS ARTICLE
Listed below are the latest comments about this post.
These comments are submitted anonymously by website visitors.