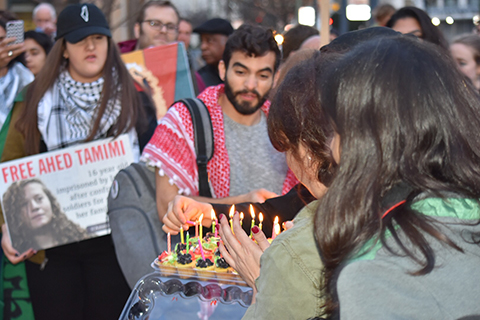 Protests and actions in San Rafael, Oakland, Los Angeles, across the US, and around the world marked the 17th birthday of imprisoned Palestinian teen activist Ahed Tamimi. With birthday songs, cakes and cards as well as protest actions against Israeli occupation and colonization, the streets of international cities marked days of action called for by Samidoun, the Free the Tamimi Women campaign and other organizations to demand the release of Ahed, imprisoned since December 19 and facing charges before an Israeli military court. On February 13, an Israeli military court ordered journalists to leave the courtroom then extended Ahed's detention until her next hearing on March 11.

Ahed was seized by occupation forces in a pre-dawn raid on her family’s home in the Palestinian village of Nabi Saleh, near Ramallah, where she and her family are leaders in the anti-colonial indigenous land defense and resistance movement. The village’s land and even its spring have been confiscated by the illegal colonial settlement of Halamish and the village is regularly subject to invasions, raids and arrests. Ahed’s mother, Nariman was arrested by occupation forces later the same day.

Israeli Court Extends Detention of Ahed Tamimi into Next Month |