Add an Event
Newswire
Calendar
Features
Home
Donate
From the Open-Publishing Calendar
From the Open-Publishing Newswire
Indybay Feature
Publish to Newswire
Add an Event
Related Categories: Palestine | International
Israeli Court Extends Detention of Ahed Tamimi into Next Month
by IMEMC
Tuesday Feb 13th, 2018 6:40 PM
The Ofer military occupation court decided, on February 13, to extend the detention of teenager Ahed Tamimi until next month. The court session was set for 11 March. 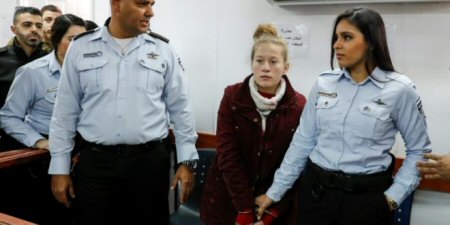 The military judge tried Tamimi in a closed session, and ordered all media and journalists to leave the courtroom.

Tamimi is being tried over 12 charges, including assault and incitement and obstructing the work of soldiers, in addition to “participating in violence.”

The 17-year-old, who comes from a leading Palestinian family known for its political activism and popular resistance, was filmed slapping an Israeli soldier trying to storm her family home in Nabi Saleh village.

Tamimi has been under arrest since 2 December, 2017, over the video.

On the same day, according to the PNN, Israeli forces detained Ahed’s mother, Nariman, while she was trying to visit her daughter.

The trial of Ahed and her mother Nariman has been postponed several times and their detention extended to today.
http://imemc.org/article/israeli-court-ext...
Add Your Comments
LATEST COMMENTS ABOUT THIS ARTICLE
Listed below are the latest comments about this post.
These comments are submitted anonymously by website visitors.