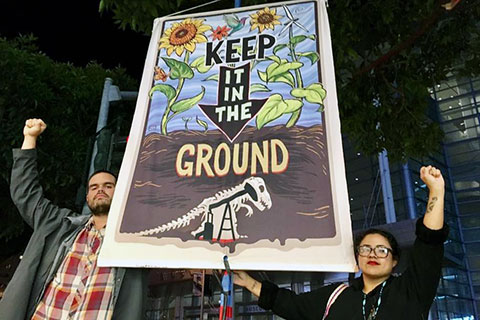 On November 29, over a dozen climate justice activists protested Governor Jerry Brown’s speaking appearance at the Metreon in San Francisco as part of the New York Times ClimateTECH summit. They called out the hypocrisy of Brown claiming to be a “climate leader” while he promotes fracking and other extreme oil extraction methods in the state.

One of the organizers of the San Francisco protest was twenty-nine-year-old Daniel Gustavo Ilario of Castro Valley, who was in Bonn, Germany as a part of an indigenous delegation and was one of the protestors who interrupted Brown's speech. Ilario is a member of Idle No More San Francisco Bay, an indigenous-women-led climate justice organization.

“Governor Brown is no climate hero,” Ilario said before the protest. “He takes millions from the oil industry and then allows fossil fuel lobbyists to write legislation. We do not have time for half measures and false solutions like California’s cap-and-trade program.”

While Jerry Brown receives largely fawning coverage in the mainstream and “alternative” media touting his supposedly “green” credentials, he is an enthusiastic promoter of many environmentally destructive policies, including fracking by Big Oil and Big Gas, oil industry-backed carbon trading, pollution of groundwater supplies with oil wastewater and the construction of the salmon-killing Delta Tunnels.

Related Features: The Gusher of Big Oil Lobbying Money in Sacramento | The Epic Battle Between Big Oil & the People of California | Reclaim Our Democracy from the Oil Industry