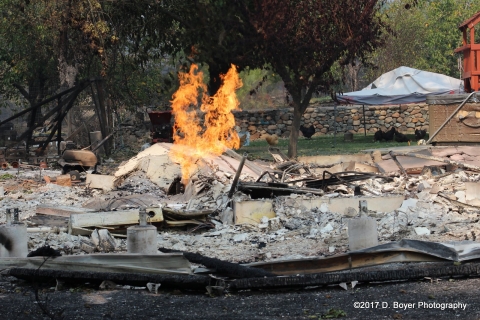 Late in the evening on October 8, the Diablo Winds blew into Santa Rosa, resulting in five fires. The rapidly spreading fires caused dozens of deaths and burned thousands of homes and other structures to the ground. Beyond those directly effected, the Santa Rosa firestorm, and other fires in the North Bay have polluted the air across the entire region.

People are checking their city’s air quality online before leaving home, donning face masks on days designated “unhealthy." The elderly and children are at greatest risk of premature death, cardiovascular and respiratory effects from breathing in particles from smoke caused by the wildfires that have made thousands homeless in Sonoma, Napa, Yuba and Mendocino Counties. Meanwhile, a new wildfire that started in Santa Cruz County on October 16 is adding to the Bay Area’s toxic air pollution. A vegetation fire that grew along a hillside near homes in the East Bay suburb of Dublin on October 17 has been contained.

An often overlooked population disproportionately affected by the fires is people whose legal status in the US is undocumented. Immigrants make up a majority of the 55,000 people employed by the wine industry in the counties north of San Francisco. Those who are undocumented are not eligible for most disaster aid, and many have fled the area with little to no resources. While the Napa wine industry is hoping to recover, the area’s growing marijuana industry has suffered tremendous losses as well, since marijuana farms cannot obtain crop insurance or FEMA relief funds.

Questions remain about the origin of the fires. A preliminarily suspicion is that at least some of the fires were started when electrical lines arced or fell due to the heavy winds, allowing sparks to hit dry grass. PG&E has a history of diverting money from its tree-trimming program to boost profits, and investigations may find that neglect by the giant utility contributed to the fires. Global warming is viewed as having a role, as the state's hottest summer on record turned dry vegetation to tinder. The death toll in the Northern California wildfires has risen to 42, and one couple who lost their home has already initiated a suit against PG&E.

Put Out the Fires and House the Homeless |