Add an Event
Newswire
Calendar
Features
Home
Donate
From the Open-Publishing Calendar
From the Open-Publishing Newswire
Indybay Feature
Publish to Newswire
Add an Event
Related Categories: California | North Bay / Marin | Environment & Forest Defense | Health, Housing & Public Services
Urban Firestorm Devastation Santa Rosa California
by D. Boyer
Monday Oct 16th, 2017 5:56 PM
On October 8, 2017 between the hours of 10pm and midnight the Diablo Winds blew into Santa Rosa California. The result was 5 wind driven fires. Some folks have died and many homes and other structures have been burned to the ground. On October 10, I visited a few areas that had been devastated by the urban firestorm. Pics and video from the areas effected. original image (1600x1067)
It seems preliminarily the fires were started when electrical lines arced or were fallen due to the heavy winds. Residents effected by the fires reported hearing the winds between the hours of 10pm and into the next morning. The Diablo winds "is a name that has been occasionally used for the hot, dry offshore wind from the northeast that typically occurs in the San Francisco Bay Area of Northern California, during the spring and fall." It has been attributed to the cause of the Oakland Hills Fire in 1991. The winds themselves don't cause the fires, but power lines unable to handle the extreme weather blow around and arc, or the poles sometimes fall igniting the first flame. During my walk around of the effected areas I notice that aluminum melted liquefied and then hardened again. Plastic had melted and burned. Cement burned. Plus many other materials that could cause the air to become toxic to breathe.
§This was the scene in Santa Rosa 24 hours after the fire started.
by D. Boyer Monday Oct 16th, 2017 5:56 PM 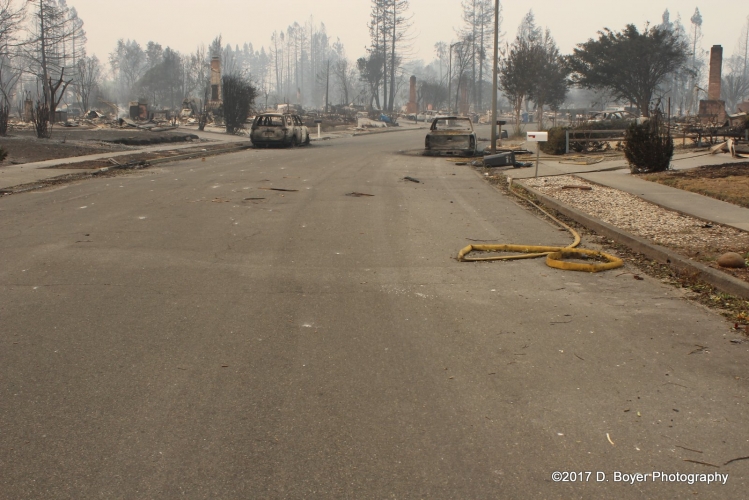 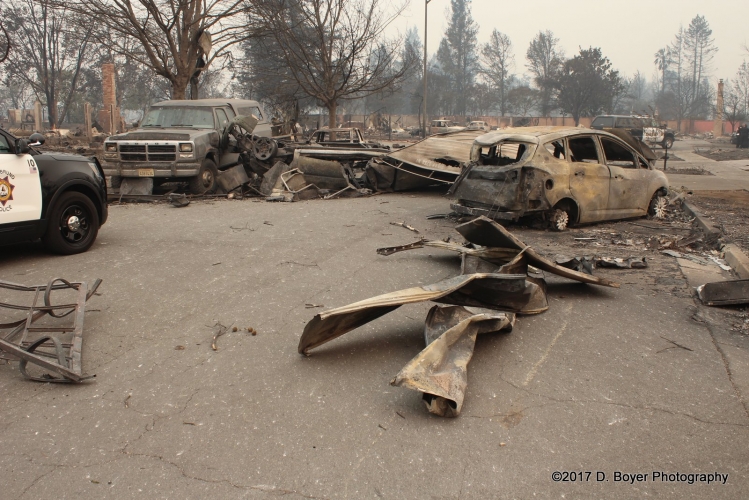 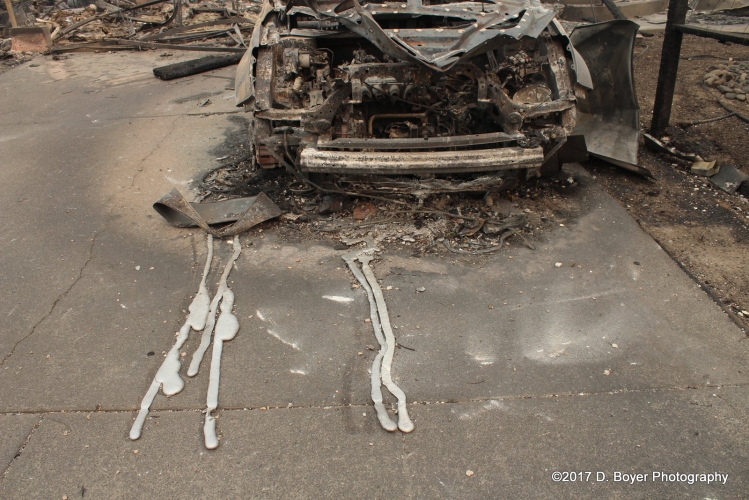 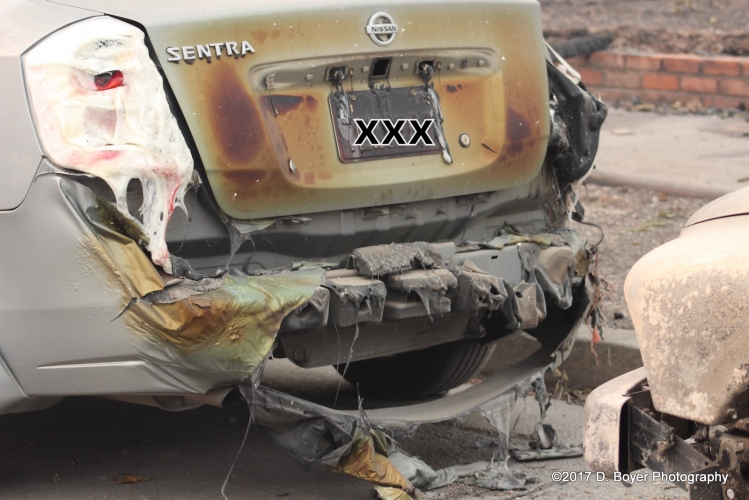 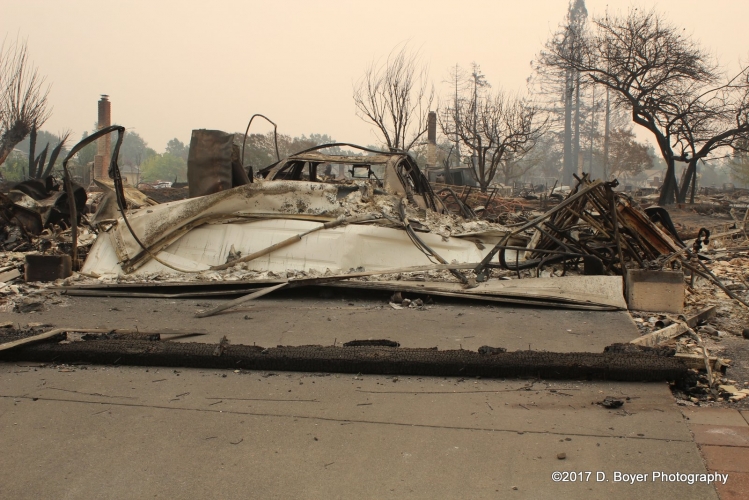 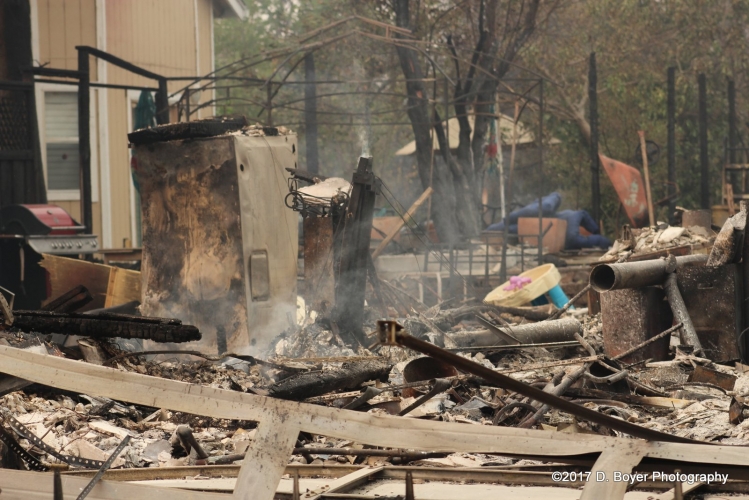 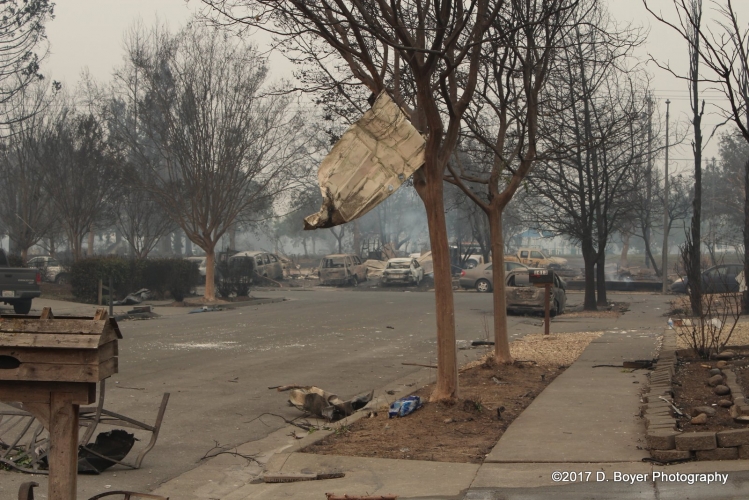 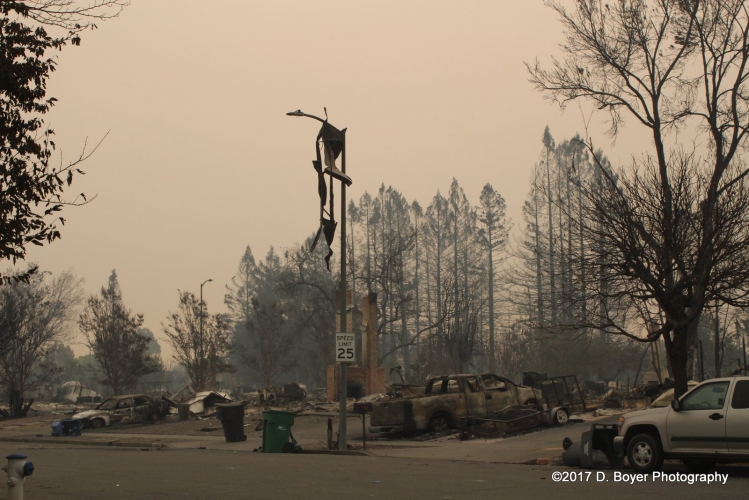 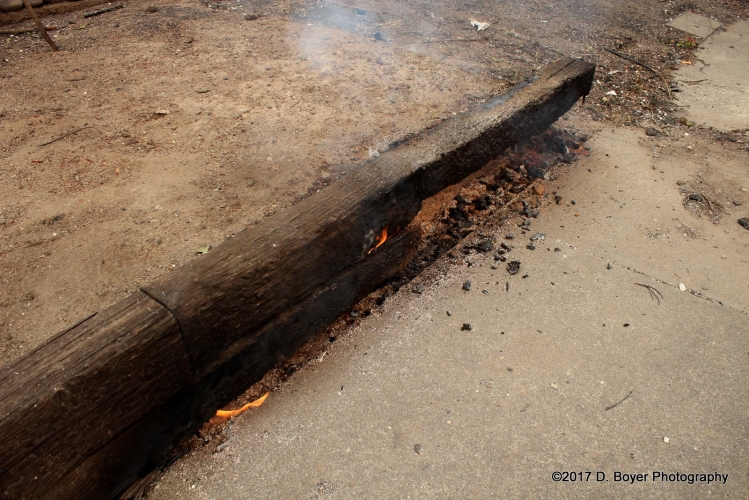 original image (1600x1067)
"Exposure to creosotes, coal tar, coal tar pitch, or coal tar pitch volatiles may be harmful to your health. Eating food or drinking water contaminated with a high level of these compounds may cause a burning in the mouth and throat as well as stomach pain."
§The randomness of the fire left some green
by D. Boyer Monday Oct 16th, 2017 5:56 PM 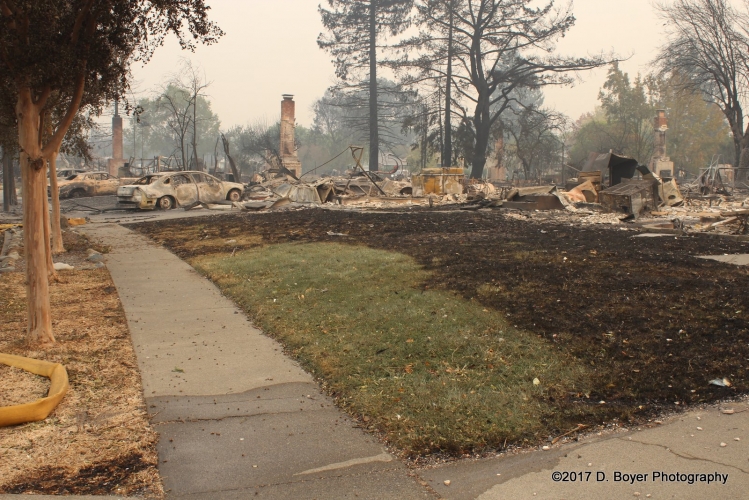 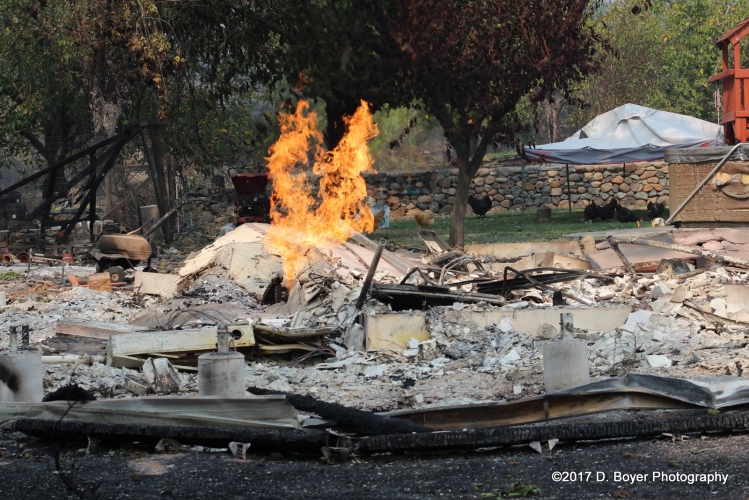 original image (1600x1067)
It appears that most animals know how to naturally avoid fire. I read many stories of animals surviving through those firestorms.
In this photo behind the fire 16 chickens that are ok, but the house was not. I asked the homeowner who was standing near-by permission to take this photo. Even though it’s breaking news and taken from the street I always try to get permission first. Sometimes that’s not possible but I still know what photos to capture and how to capture them while causing no harm.
§Common thread; the fireplaces survive.
by D. Boyer Monday Oct 16th, 2017 5:56 PM 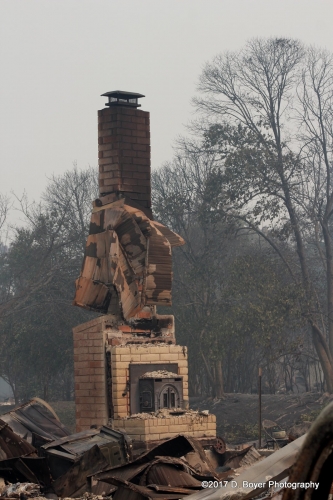 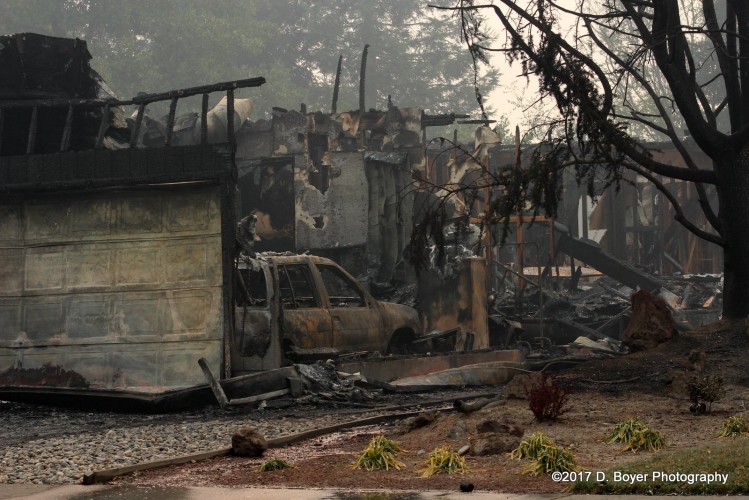 
https://youtu.be/G9a6tzaEHo8
Add Your Comments
LATEST COMMENTS ABOUT THIS ARTICLE
Listed below are the latest comments about this post.
These comments are submitted anonymously by website visitors.